Following the Trump administration's sanctions on Iran, growing economies that are highly dependent on imported energy resources are in need of tight cooperation more than ever. 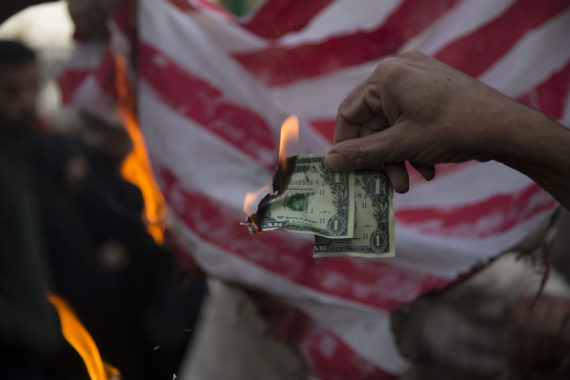 On the eve of renewed sanctions by Washington, An Iranian protester burns a dollar banknote during a demonstration outside the former US embassy, marking the anniversary of its storming by student protesters that triggered a hostage crisis in 1979 on November 4, 2018 in Tehran, Iran. Getty Images

The international arena is experiencing a turbulent period in which the effects of political, economic, and commercial decisions taken by President Donald Trump are clearly being felt. During his election campaign, Trump influenced the agenda with his statements on the actions he will take on issues closely related to the global political and economic system. Using the motto “America First,” the U.S. President made it clear to the whole world that his ultimate goal is to protect the interests of the American nation. Thus, he first decided to withdraw from the Paris Climate Agreement, which he believed was in contradiction with the country’s interests. Then, again arguing to protect the interests of the American people, he began to implement trade sanctions on many actors such as China, Russia, the EU, and Turkey. However, these sanctions not only affected the targeted states but also hit global trade.

Lastly, on May 2018, Trump unilaterally withdrew the United States from the Joint Comprehensive Plan of Action (JCPOA), which is also known as the Iran nuclear deal, although the other signatories of the deal, P5+1 countries, strictly opposed the decision. He charged the Tehran regime with supporting terrorist actions and organizations widening the chaos in the Middle East, producing ballistic missiles, and continuing its nuclear program despite the JCPOA. The withdrawal of the country followed Trump’s announcement on the re-implementation of the sanctions that had been suspended after the nuclear deal. In order to increase the pressure of sanctions and to further isolate Iran, Trump also threatened other states and corporations: “Anyone doing business with Iran will NOT be doing business with the United States!”

Trump’s “America First” motto and his withdrawal from the JCPOA has not only affected targeted states, but has also hit global trade.

The new round of U.S. sanctions

The first round of the two-phase sanctions began to be imposed on August 6, and from that time on, Iran has been unilaterally blocked to have or access the U.S. dollar and precious metals like gold and silver, and so on. The automotive and aviation industries are also being isolated from the international system. The second round targeting Iran’s petroleum, the largest income source of the government revenues, and shipping industries and port operators to diminish the country’s petroleum and petrochemical products exports to zero began to be re-imposed on November 5. On the same day Washington granted temporary waivers to 8 states – China, India, South Korea, Japan, Taiwan, Italy, Greece and Turkey. The U.S. administration claims that it is trying to cut off Iranian oil exports since the Tehran regime uses the revenues obtained from the petroleum industry to fund terrorist organizations and conduct terrorism in different parts of the world.

Leading by the remaining P5+1 countries, China, France, Russia, the United Kingdom and Germany, the EU and Turkey have expressed their opposition to Trump’s decision many times and intend to maintain their trade relations with Iran. Especially the position of China and India is crucial for Iran as these two countries are its largest crude oil importers. They all have searched for new types of payment systems to avoid U.S. interruption while doing business with Iran. The EU has begun to implement “blocking statute” to enable EU companies to continue their commercial relations with Iran and compensate the damages that may arise from the sanctions. Later on, the EU, China and Russia also agreed on founding a special purpose vehicle that could channel new payment mechanisms alternative to using U.S. dollars. The two biggest buyers of Iranian crude, China and India, reached a deal with the Tehran regime on using their national currencies. Turkey has been evaluating whether to use Turkish Lira and/or establishing a barter system that could facilitate exporting its goods and services to Iran in response to its crude oil imports.

The two biggest buyers of Iranian crude, China and Iran, have reached a deal with the Tehran regime on using their national currencies during business. Now, Turkey is evaluating whether to do the same.

What are the effects of sanctions on Turkey-Iran energy relations?

Turkey, as a growing economy, imports approximately 90 percent of its oil and 95% gas and Iran has been one of its primary suppliers. In 2017, the country imported about 45 percent of crude oil and 17 percent of natural gas it consumed from Iran. In other words, Iran was the largest crude oil and the second largest natural gas supplier of Turkey.

As the new round of sanctions does not cover Iran’s natural gas sector, contrary to the previous ones, it’s expected that Turkey’s natural gas supply from Iran will not be affected and the country will not be subjected to U.S. sanctions. However, the amount of Iranian crude oil in total crude oil imports of Turkey has begun to decline as Trump decided to re-impose the Iran sanctions on May 2018. Turkey’s biggest crude oil importer TUPRAS began to gradually reduce the amount of oil supplied from Iran in order to balance the internal market. According to Turkey’s Energy Market Regulatory Authority (EPDK), in April 2018, the amount of Iranian crude oil was 67 percent of the total crude oil imports, which decreased to 51% in May. A sharp drop was experienced in June as it fell to 15 percent. However, the amount increased in July and August, reaching respectively to 38 and 31 percent.

At that point, it should be highlighted that Turkey did not stop importing crude oil from Iran even during the internationalized sanctions throughout 2010-2015. This signals that Turkey will continue to import Iranian oil during the unilaterally imposed U.S. sanctions. In addition, Iran’s 38 percent share in total crude oil imports of January 2018 is also remarkable. This could be interpreted as a sign that import amounts may vary from time to time. Moreover, Iran has been one of the two countries where Turkey imports most of its crude oil since 2011. Accordingly, TUPRAS, supporting President Erdogan’s statements, has announced that Turkey will continue to import crude oil from Iran.

Following the Trump administration’s sanctions on Iran, growing economies that are highly dependent on imported energy resources are in need of tight cooperation more than ever.

What’s next for the waivers?

As the exception granted by the Trump administration will last for only 180 days, the 8 waivers, including Turkey, now need to plan how to manage their relations with Washington and Tehran. Japan and South Korea are expected to cut their Iranian crude imports completely while China, India and Turkey seem decisive to pursue their imports. However, as the shares of Greece, Italy and Taiwan are rather low and, contrary to other waivers, they did not make a clear statement on unilaterally imposed sanctions, their future positions are unclear. Besides, since the waiver is limited to 1.1 million barrels of Iranian oil per day, the waivers also need to collaborate on how to allocate this amount.

It is expected that during the 180-day exception period, China, India and Turkey will investigate alternative ways and conduct intensive diplomatic efforts engaging at political and financial levels to maintain their oil trade with Iran. It would also be beneficial for both the three-waivers and Russia and the EU to create a counter-block to convince the Trump administration to reconsider its unilaterally imposed sanctions. Growing economies that are highly dependent on imported energy resources are in need of tight cooperation more than ever.