Will HDP Choose Democratic Politics and Stand Against the PKK?

With its 67 deputies, the HDP has another chance to choose democratic means over violence and polarization ahead of the new parliamentary term. Will the party consider the electorate’s demand of civil politics and stance against the PKK? Will they be able to show the courage to stand against the PKK, which has already been displayed by the electorate? Or are they willing to keep their violence prone policies? 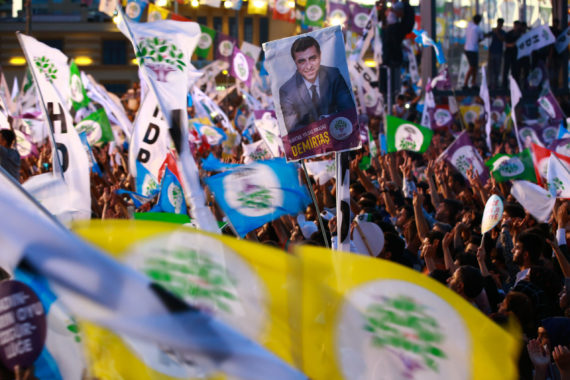 “The perpetrators must be found regardless of who they are. Such acts are unacceptable.” These are the words remarked by the Peoples’ Democratic Party (HDP) after the PKK terror group killed a man named Mevlut Bengi and hung his body on a lamppost with a note left near the body. The terror group does not hide its violent acts but rather announces them on their official website to intimidate the Kurdish people in the region, just as they did in the case of Remzi Guler, who was killed by the PKK along with his mentally challenged son, or like the suicide attack they organized at the bus stops in Ankara, during which 36 civilians were killed and 349 were injured. Most of the time, the PKK does not only claim responsibility for the mass murders, but also pays homage to their violent attacks and murders. Many examples of it can be viewed in the pro-PKK periodical titled Yeni Özgür Politika.

On the other hand, the HDP condemns all the murders perpetrated by the PKK without referring to the terror group and always issues the same statement: “The perpetrators must be found regardless of who they are. Such acts are unacceptable.” Several people occasionally object to this approach of the party. For instance, Leyla Zana, one of the most prominent figures in the Kurdish political movement, tried this. Zana was accused of betrayal as she criticized the PKK and said: “The Kurds supporting the HDP are politically-driven while the Kurds supporting the AK Party (Justice and Development Party) are driven by their emotions.” According to the PKK, all of the Kurds who support the AK Party are traitors regardless of their motivations. Muzaffer Ayata, one of the senior names within the PKK, answered this statement of Zana in 2016 on Yeni Özgür Politika: “The traitors are probably thinking that they will not be called to account and keep feeding on the bones thrown to them. They will always be cursed and called traitors.”

Altan Tan, the HDP Diyarbakir deputy last term, criticized the PKK and the HDP while analyzing the support Erdogan received from the Kurdish people following the constitutional amendment referendum. Tan said: “There is a group who have been inclined towards the AK Party although they formerly supported the HDP. The reason is obvious: The people do not want to see a civil war breaking out or politics based on digging ditches, but rather wish to see support to democratic channels.” Tan also accused the HDP of condoning all these and added: “Some people find it very difficult to answer the question why Erdogan enjoys an increasing support. They cannot admit that the PKK has made mistakes and that digging ditches, civil war attempts, conflicts, violence and terror were wrong.” Tan is a name who joined the HDP during the party’s later stages and eventually resigned from the party. But interestingly, the HDP did not defend Zana after the PKK blacklisted her although she was from the grassroots of the movement.

In the latest elections, the HDP gained 67 seats in Parliament by receiving 11.6 percent of the vote. It was observed that the party’s vote share declined in the eastern and southeastern regions, where the Kurdish population is predominant. 30 percent of the party’s overall votes came from Turkey’s three largest cities, namely Istanbul, Ankara and Izmir. So, it can be seen that the HDP’s vote share among the Kurdish population declined, while the vote share it achieved in metropolitan cities was partly due to the support given by the main opposition Republican People’s Party (CHP).

The electorate leaned towards the HDP mostly because of the view that the HDP might detach from the PKK if it grows stronger, which will lead to the consolidation of civil politics and bring an end to terror. During the last parliamentarian term, the HDP was busy with practicing or legitimizing the orders and discourses of the PKK. In the general elections held on June 7, 2015, the HDP received 80 parliamentary seats. Only one month after the elections, senior PKK figure Cemil Bayik called upon people to take up arms and prepare tunnels and trenches, while the HDP leader Selahattin Demirtas said: “We call people to protect this honored resistance of digging ditches to build our autonomy; taking a step back will clash with our dignity.” PKK headed to city centers and terrorized urban spaces by digging ditches. Thousands of Kurdish people had to emigrate due to the ditches dug in front of their houses. In the early elections held on November 1, 2015, the HDP’s vote share decreased from six million to five million, while the number of its deputies went from 80 to 59.

With its 67 deputies, the HDP has another chance to choose democratic means over violence and polarization ahead of the new parliamentary term. Will the party consider the electorate’s demand of civil politics and stance against the PKK? Will they be able to show the courage to stand against the PKK, which has already been displayed by the electorate? Or are they willing to keep their violence prone policies?