Will Libya Have a Negative Impact on Russia-Turkey Relations?

Until recently, Russian media engagement with the Eastern Mediterranean was limited to the situation in Syria, but the recent agreements between Turkey and Libya's Government of National Accord has quickly brought Libya to their attention. 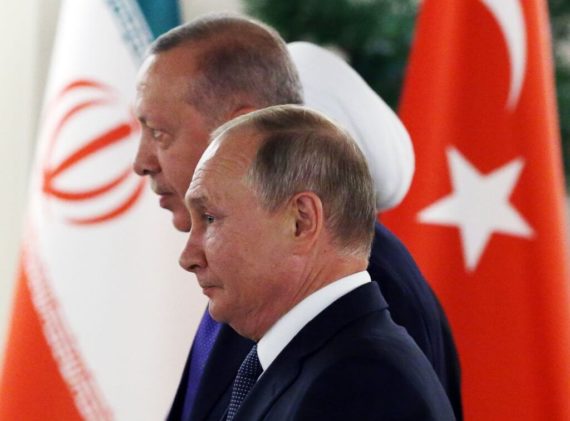 On December 26, 2019, Turkey’s official gazette (Resmi Gazete) published the Memorandum of Understanding ratified by the Turkish President on Security and Military Cooperation between the Government of the Republic of Turkey and the Libya’s UN Recognized Government of National Accord.

Earlier, on December 7, 2019, the official gazette published the ratified Memorandum of Understanding between the Government of the Republic of Turkey and the Libya’s Government of National Accord on the Delimitation of the Maritime Jurisdiction Areas in the Mediterranean.

The entry into force of the aforementioned documents marked the creation of a legal framework for Ankara to declare its rights in the Eastern Mediterranean (gas exploration and transit routes), and also to have a legal framework for providing military-technical assistance to the Libyan Government of National Accord, as its regional ally.

Further statements made by President Erdogan regarding his readiness to send Turkish troops to Libya to support the Government of National Accord has attracted growing attention in the Russian media and analysts. According to the Turkish president, The Grand National Assembly of Turkey will consider the relevant request in early 2020.

Let us note that until now the Russian media’s engagement with the topic of the Eastern Mediterranean was limited to the situation in Syria. Very little was written and said in Russia about the struggle between Turkey and the Turkish Republic of Northern Cyprus and the “consortium” of Greece, Cyprus, Egypt and Israel over the large gas fields in the Eastern Mediterranean and over the corridors supplying produced gas to the European market.

Nevertheless, the signing of the above-mentioned documents by the Turkish Republic and the Government of National Accord brought Libya to the top of Russian news feeds very quickly.

In particular, on December 16, 2019, Vedomosti, an influential business newspaper in Russia, published an article by Ivan Safronov titled “Turkey is preparing for the invasion of Libya”. Below there is the following text, “Russia hopes that the decision to send troops will be postponed until the meeting between Putin and Erdogan” (the meeting dedicated to the commissioning of the Turkish Stream gas pipeline is scheduled for January 8, 2020).

Let us quote the publication: “The position of the Russian side cannot be changed,” a senior diplomatic source of Vedomosti says: supporters of Haftar and Saraj should sit at the negotiating table, simultaneously ceasing hostilities. According to him, the Russian negotiators will try to convey this position to each of the parties to the conflict in order to at least temporarily maintain the status quo and avoid the entrance of Turkish military forces to Libya at least until the meeting between Putin and Erdogan, which is scheduled for January 8”.

Also on December 26, 2019, the influential Russian Internet edition Gazeta.ru published an article by Nino Dzhgarkava entitled “Waiting for an invitation: Erdogan is preparing to send troops to Libya”. Under the heading there is the following text: “Erdogan in January will ask Parliament to allow the military to be sent to Libya”. As the newspaper notes, “the threat of military conflict in the region has become even close”.

Here is how a Russian observer assesses the possible consequences for the situation in Libya of the possible entry of Turkish troops into the country: “After Turkey has opened up the opportunity for troops to enter Libya, the UAE, Egypt, and even Russia, who support the field marshal (Haftar), may be involved in the conflict, at least diplomatically. Ankara’s actions cause tension in Turkey’s relations with the European Union and the USA”.

The publication also notes the allegations made by President Erdogan to Russia, on the use of PMC “Wagner” to support the Libyan National Army, led by Khalifa Haftar. The Turkish leader estimated the number of “Wagner” fighters, located in Libya, at about two thousand people.

The final subtitle in the article by N. Dzhgarkava is quite characteristic: “Abandoned by all Sarraj”.

Let us quote a few lines: “Both from Turkey and from the GNA, the conclusion of the Memorandum carries more demonstrative measures aimed at external players. The recognized government so far has not really felt the support of either the European Union or the UN. At the same time, the Haftar detachments managed to achieve significant progress in eight months – some forces are already several kilometers from Tripoli. When in April Haftar announced plans to occupy the capital of Libya, the Sarraj government was very disappointed with the reaction of the European Union, especially France. The GNA directly accused her (France) of supporting the Libyan National Army and even severed diplomatic ties with Paris”. Furthermore: “Thus, the GNA, feeling itself abandoned by Europe and, in particular, by Italy, went to cooperate with Turkey, despite the threat of deterioration in relations with the EU.”

It is clear, that the above-mentioned articles of reputable Russian media fix the current situation and, without making forecasts of the development of the situation, set a critical date – January 8, 2020 – when the Libyan issue will be discussed in a face-to-face format between the presidents of Russia and Turkey.

It is clear that before these talks between presidents Putin and Erdogan, the Russian side will try to give itself answers to several basic questions. It is the answer to these questions that will determine the initial position of the Russian side at the negotiating table.

And finally, bearing in mind the strategic nature of modern Russian-Turkish relations, how can Libya be prevented from becoming a new Syria in their relationship, moreover, not as in 2019, but as in 2015?

As we remember because of Turkey and Russia’s different positions on Syria, in 2015 there was a grave crisis, which was later overcome with great difficulty and which still, sometimes, unpleasantly echoes in Russian-Turkish relations.

At the same time, after the statements of the President Erdogan it should be important for the Turkish side that the topic of gas reserves in the Eastern Mediterranean enter the Russian foreign policy agenda. And, moreover, that with understanding Russia meet the legitimate demands of Turkey to take its interests into account in regards to the gas fields in the Eastern Mediterranean.

The Russian Federation, which has so far distanced itself from the growing dispute in the region will inevitability reconsider its position on gas from the Eastern Mediterranean. Because it is clear that the gas is the subject of the main debate in the region, and not the economic interests of different countries inside Libya. Although Libya is a country rich in energy resources, at the same time, it is in need of a political settlement, reconciliation and restoration of its economy.

In this regard, it is necessary to make reference to the meeting in Astana format, which took place between Presidents Putin, Erdogan and Ruhani, on September 16, 2019 in Ankara. It is worth recalling that then in Ankara all three leaders, literally with one voice, spoke about the prospect of replicating the successful work experience of the Astana format to other regional conflicts. Then the situation in Yemen was on the agenda, but today Libya came to the fore, which gradually began to supplant even Syria from the Russian-Turkish agenda.

Hopefully, both Russia and Turkey, taught by the bitter experience of Syria, in January 2020 will attempt to replicate the experience of resolving the Syrian conflict in the Astana format to the Libyan process. It can be noted that intensive preparations for these negotiations by the parties are already underway and they will be important both for Russian-Turkish relations and for the region as a whole. However, the Russian and Turkish leaders have already proven their ability to agree on the most complex and painful issues based on mutual consideration of interests. In this sense, Libya should not become a break point for them, but instead become a new area of regional dialogue and cooperation.