Will One Million People return to Syria's Safe Zone?

It is clear that if 350,000 Syrian refugees returned back to the tiny areas of northern Aleppo and Afrin, the return of one million to the vast areas of the safe-zone along the Turkish-Syrian border isn’t unachievable. 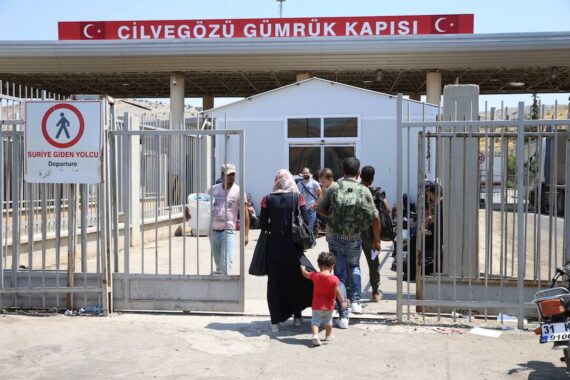 Syrian families who took refuge in Turkey near the Turkish border, continue to return to Afrin in Syria. In the first 8 months of 2019, more than 143,000 Syrians returned to their country through the Cilvegözü Border Gate. 12.9.2019 AA

On 7 of August, Turkey and the US declared their safe-zone deal. Since then many things have been discussed, but one of the most important topics was the declaration that the safe zone would become “a peace corridor”, and that “any additional measures” would be taken so that Syrian refugees can return home. While many were discussing the meaning of this, Turkish President Erdogan announced plans to resettle one million refugees in the safe-zone in northern Syria. Many have asked where this figure has come from, and if the return of one million refugees is realistic. In reality, the number of Syrians returning to Syria may be even higher, but only if the YPG does not prevent it.

Before determining where this number came from, it is clear that if 350,000 Syrian refugees returned back to the tiny areas of northern Aleppo and Afrin, the return of one million to the vast areas of the safe-zone along the Turkish-Syrian border isn’t unachievable. According to the UNHCR, Turkey is currently hosting 3,658,250 Syrian refugees. Over 300,000 are Syrian Kurds from east of the Euphrates, and close to 350,000 are Syrian Arabs from the eastern Euphrates governates of Hasakah, Deir al-Zor and Raqqa. In addition, the Syrian Stabilization Committee, an office of the Syrian Interim Government, reports nearly 350,000 IDPs from YPG-held areas are now living in northwestern Syria.

If the safe zone is established, these IDPs can return home. Such a movement would encourage more Syrian refugees in Turkey to return to the areas under Turkish-protection in northern Aleppo and Afrin. Furthermore, according to the UNHCR, the Kurdish Regional Government in Iraq hosts over 250,000 Syrian refugees. 90,000 of them are living in camps. In total, 1,250,000 refugees might return to the safe zone, but the number of returnees might increase more if refugees who originated from elsewhere return back to the safe zone as well. Many have relatives, or would prefer acceptable living conditions somewhere in Syria to being a refugee.

In line with the suggestion of President Erdogan, if the safe zone is supported by a systematic housing project that includes other necessary services and infrastructure, the capacity of the region might increase. Such a step might bring fruitful progress for the rehabilitation and reconstruction of Syria, and may accelerate the economy in other regions of the country as well, therefore, many other refugees might return to other areas of Syria.

However, the housing project of Erdogan faces two main obstacles. The first is the reluctance of the international community. Most countries are open to the idea of building housing and infrastructure in general, but are not willing to provide the necessary funds, despite it being in everyone’s best interests. The housing project would be a win-win situation for all involved, from the refugees to the construction firms. The second main obstacle for this housing project is the YPG and its continued support by CENTCOM. As long as the area isn’t liberated from the militants, the refugees will hesitate to return, especially Syrian Kurds who are seen as traitors and collaborators by the YPG. Furthermore, in a meeting between CENTCOM officials and the SDF/YPG both sides agreed that refugees can only return when preparations are complete, that refugees have to be screened, and only those who originated from the region without any connection to terror organizations and crimes against the Syrian people would be allowed to return. Despite the irony that such a condition is being formulated by a terror-affiliated entity, this condition of origin will restrict the return of refugees.

Since when is the freedom of movement legally restricted inside Syria for Syrians? According to UNHCR, there are 6.2 million people, including 2.5 million children, displaced within Syria, the biggest internally displaced population in the World. Living in another part of Syria has already become a reality for Syrians. Also the experience in Manbij showed the difficulties of using a registration process for so many people. Many who had lived in Manbij for years and even went to school were never registered. Also many, especially Syrian Kurds, don’t have any proper documents. In this regard, no one should underestimate the willingness of the Syrian people to return to their home country once obstacles are removed. The only thing the Syrians need is a framework on the ground which enables their return and to live in peace. After that, most Syrians are more than willing to rebuild their own country.