Will Populism or Public Service Prevail in Istanbul? 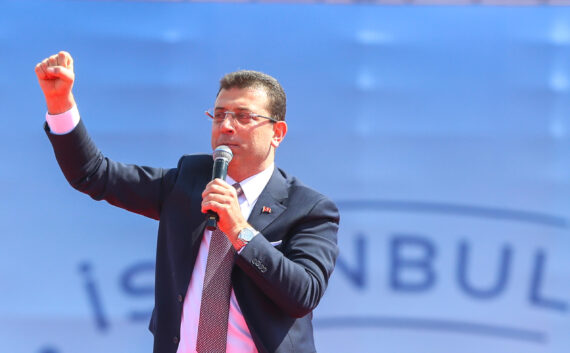 Ekrem Imamoglu addresses the crowd during a rally in Maltepe district of Istanbul, Turkey on April 21, 2019.

Since its foundation, the AK Party has rightfully been designated as a ‘political party of public service’ as the AK Party’s leadership has always focused its political energy on Turkey’s public administration deficit. During the first decade of its political power, a steady economic growth had been accompanied with various ameliorations primarily in the fields of transportation and health. From the problem of overcrowded classrooms in education to the revolutionary changes for the benefit of disabled citizens, the AK Party’s politics of public service has achieved significant success in various fields of social life.

The AK Party’s reliance on Erdogan’s leadership for winning elections has concluded with the weakening of the AK Party’s organizational structure.

Learning the need to remain close to the people from the AK Party’s political success, Ekrem Imamoglu draws himself away from the hate discourse of the Republican People’s Party (CHP) and instead adopts a much more moderate political discourse that mainly relies on projects and services. Nonetheless, people will not find Imamoglu’s political discourse credible and convincing until the CHP itself abandons its discriminatory and exclusionist political discourse.

Although Imamoglu’s political promises influences Turkey’s young voters, mature voters hesitate about the CHP’s sincerity due to its negative political record. Being highly discontented about its political history, Turkish electors cannot easily be convinced to vote for the CHP even though they personally feel sympathy for its municipal candidate. Highly valuing the AK Party’s policies and public services, Turkish electors are inclined to vote for the ruling AK Party if only the linkage between the candidate and the electors could have been restored.

In the recent years, populism has become one of the most controversial and frequently-used concepts of politics. Amongst the leftist political parties, Bulent Ecevit was the most populist political leader. Holding up Ecevit as an example, Muharrem Ince appealed to populist political discourses both in his struggle for the CHP’s chairmanship and Turkey’s presidency. As soon as his candidacy for Turkey’s presidency was announced, Ince had adopted a populist language to convey his political message to large masses of people. Yet, his politics backfired due to the insincerity of his attitudes and expressions.

People still hesitate to vote for Imamoglu as the CHP never adopts a service-based political vision and neglects political sensitivities of the people in forming its alliances.

With reference to his inclusive and reconciliatory discourses, Imamoglu adopts a populist political attitude as well. As opposed to the CHP’s exclusionist political discourse, Imamoglu’s electoral campaign aimed at appealing to large masses of people, including the AK Party’s voters. In the printed bulletins, Ekrem Imamoglu has even adopted a cunning electoral strategy by emphasizing his surname ‘Imamoglu.’ In other words, he appears to imitate the AK Party’s political discourses which has always been criticized by the CHP for abusing the religious feelings of Turkey’s electorate. Nonetheless, people still hesitate to vote for Imamoglu, as the CHP never adopts a service-based political vision and always neglects political sensitivities of the people in forming its alliances with other political parties.

In contrast, the AK Party has succeeded to strengthen its political discourses by changing the sociology of Turkey’s electorate and creating a new class of electors, and taking the resolution of Istanbul’s urban problems (such as urban poverty, lack of infrastructure, population density) into the center of its political agenda. Yet, as the AK Party won both general and local elections thanks mainly to Erdogan’s strong leadership. The linkage between the people and the AK Party has weakened. As Turkey’s economic problems exacerbate, Turkish electors have begun to adopt a new electoral attitude that is separated from political ideologies and allegiances.

As Turkey’s economic problems exacerbate, Turkish electors have begun to adopt a new electoral attitude that is partly different from political commitments.

In such a political and economic milieu, Imamoglu strives to gain the support of Turkey’s public opinion by adopting a moderate and inclusive political discourse. Imitating Binali Yildirim’s moderate political stance and the AK Party’s public service-based political vision, the CHP aims at gaining the votes of those electors who are less political and who could have voted for different political parties. Nonetheless, the CHP’s political sincerity is still open to dispute.