Will the 1997 Memorandum Last a Thousand Years?

As pro-democratic political and public actors change power balances in their favor, coup attempts become unable to achieve desired results. Furthermore, as democratic forces accumulate their share of power in the political system, coups will ultimately stop being an effective tool in power struggles. 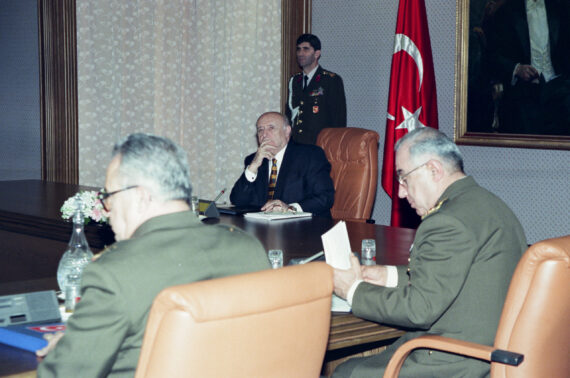 Image from the archives of Anadolu Agency depicts former Turkish President Suleyman Demirel (left), Chief of General Staff Ismail Hakki Karadayi (middle) and other commanders of the armed forces during the National Security Council Meeting of 28 February, 1997. The outcome of this meeting coined itself as a ‘post-modern’ coup in Turkey.

The claim that the process started by the 1997 Turkish military memorandum will “last a thousand years” was founded on a wrong answer to the question as to why military coups occur. According to this view, coups are the result of a clash between a state with immense powers or a “progressive” bureaucratic elite and public elements with “reactionary” beliefs. Historically, the coups in Turkey happened due to political and public actors that were unable to internalize the republican regime and Ataturk’s reforms crossed the red lines of the state. Thus, military coups would only end after the entire public internalized reforms through a radical political and cultural shift. The sociological extinction of “reactionary” views and the decreasing number of people subscribing to those views led to the end of coups.

Those who sought alternative answers to this question were also similarly mistaken. For example, people evaluating the issue from the point of political culture reasoned that coups happen due to a statist mindset with authoritarian and patriarchal inclinations. Such mental constructs, present since the Ottoman era, were the real reason for coups. The prevention of new coups required a radical shift in public mentality, which would subsequently lead to a dominance of democratic beliefs in politics. In order to accomplish this, it was necessary for the perpetrators of the coups, namely the state, the military or the bureaucratic elite, to gradually lose its importance and control in politics to a civil society with liberal beliefs.

Another opinion was that coups in Turkey occur as a result of the interference of international powers. This was especially for the cause of the U.S. due to its global influence and self-interest in Turkish politics. According to this belief, any government that adopted internal or foreign policies against the interests of the U.S. would inevitably face a military coup. Therefore, in order to prevent coups, it was necessary to stop toeing the line of the west and end their influence in Turkey.

These three views all disregard the sociological structural factors of the Turkish public. The changes in the balance of power between political and public actors in the country were not being accounted for. Coups could possibly be triggered by an authoritarian and patriarchal mindset endemic in the state, resistance of the public to internalize Kemalist reforms and bureaucracy or international forces seeking to shape Turkish politics according to their own interests. However, none of these factors explain why coups are actively being used as a tool in political power relations. The reason for this is because only the perpetrators of the coup, whether the military, bureaucratic elite or the west were being focused on. The political and sociological forces subject to the coup were being objectified and not being viewed as political agents. The reason why coups were being actively used as a tool in political power relations and succeeding in their intentions was due to the fact that the public subject to such military interventions were weak.

To give a substantial answer to the question regarding why coups occur, one must examine and account for the historical developments in political and social balances of power in Turkey. The main power struggles in Turkish politics between the 1840s and the 1920s happened between the Ottoman Sultan and the westernized bureaucratic elite, combined with inner conflicts of the bureaucratic elite itself. During this period, popular democratic forces were not even perceived as actors in politics. Since the 1950s, political power struggles have occurred between the military and the bureaucratic elite, around which gathered the capital-owning class, organic intellectuals, artists, politicians and small portions of the public in line with these elements either due to ideological or financial benefits, versus popular domestic forces of the public. We can identify two main structural breaking points within this period that deeply affected public power balances.

The first is the partial dismantling of state power and its division among democratic forces according to the principles of democratic politics. This turned the long-standing hierarchical structure of political power in the country into an anarchical one (as in power did not belong to anyone). State power that was solely wielded by the Sultan for a long time prior to the 19th century was being shared among bureaucratic oligarchic powers and the Sultan until 1919. Following the abolition of the Sultanate in 1922, political power transferred entirely to the bureaucratic oligarchy. In both cases, government power was not open to the public and had absolute owners.

The opening of political power to the public with a multi-party parliamentary system was introduced and its subsequent adoption by certain political actors in the 1950s caused a radical change in the situation; it opened the political stage for large masses in search of a democratic regime. Likewise, democracy is a system of government where segments of the population that hold a majority are the principal actors in the government of the state. From this point onwards, political power was being shared between the bureaucracy and large public masses – in other words, between the appointed and the elected. After the 1950s, the struggle for power was the main driver of Turkish politics. The 1960, 1980 and 1997 coups are critical moments in Turkish history where oligarchic powers, along with their bureaucratic and civil counterparts, acted together to keep their hold on political power and to banish the representatives of the people from the power domain via accusations of being “reactionary” and “separatist.” These sudden coups were always followed by periods where via the introduction of new regulatory agencies, power was restored to the bureaucratic oligarchy and further denied to the general public.

The second structural breaking point was the continuous strengthening of democratic public actors against the oligarchy. This is a situation that must happen in practice if a democratic regime’s ideal of transitioning political power to the public is to be realized. The conservative strata of the public, composed chiefly of people with low socio-economic status from the Turkish countryside, became urbanized and improved their economic and cultural class over the course of a half a century period. The result of this sociological shift is the gradual change of material and moral power balances between the minority oligarchic powers and majority democratic powers in the country. If a small analogy is to be made between this situation and international relations, we can say that the unipolar structure that enabled the hegemony of oligarchy powers and backed coups slowly evolved into a bipolar structure via the strengthening of democratic forces. This bipolar structure enabled the AK Party to assume power in 2002 and allowed it to become even more established and stable in the following periods between 2002 and 2010.

The period from 2010 onwards was defined by the gradual shift of power towards the pole represented by the AK Party and a transition back to a unipolar power structure. Two indicators representative of this are first, the Nationalist Movement Party’s (MHP) – a party that traditionally associated itself with a different segment of society – decision to closely follow the AK Party’s line after the November 1, 2015, elections. The second indicator is the fact that the opposition led by the Republican People’s Party (CHP) had to plan its policies defensively, with the focus of preventing AK Party’s influence and power from increasing rather than offensively, with the focus of reclaiming the government and political power.

Changing power balances explain why the coups of 1960, 1971, 1980 and February 28, 1997, were successful while the memorandum of 27 April 2007, the attempted judiciary coup of December 2013 and the failed military coup of July 15, 2016, were unsuccessful. As pro-democratic political and public actors change power balances in their favor, coup attempts become unable to achieve desired results. Furthermore, as democratic forces accumulate their share of power in the political system, coups will ultimately stop being an effective tool in power struggles. Thus, as coups fail to succeed, the heavy costs of participating in a failed coup attempt, namely the legal punishments of participating in anti-democratic acts, deter future coup attempts.

The court decision of June 2014 that sentenced the participants of the 1980 coup to life imprisonment, the current point arrived in the trial process concerning the 1997 coup and the fast-moving trial process of the 2016 coup attempt signify that Turkey has reached an important milestone with respect to domestic democratization. Coup trials can neither be reduced to, as some say, attempts of revenge, nor can they be reduced to purely apolitical processes where injustices are addressed and justice is served. Attempts to define this process through apolitical points of views disregard the historical structural breaking point that Turkey has gone through. Since the 1950s, large public masses have become political actors and the power balances in Turkey continue to shift in favor of pro-democratic forces. This historical and on-going structural process renders future coups impossible.