Insufficient knowledge and self-perception on Islamophobia and xenophobia by EU states is a further obstacle in the fight against these prejudices. 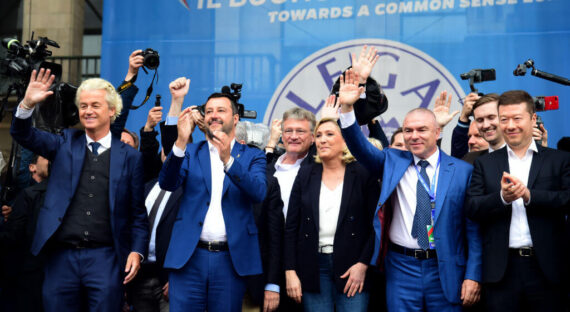 Heading towards the May 26 European elections, a new wind is blowing over the Old Continent. Indeed, by gaining electoral and political success at a national level, the far-right groups are expected to obtain excellent results in the composition of the European parliament (EP).

The architect of the new balance of power is the leader of the Italian League Matteo Salvini, whose task is to bring together all far-right forces in a new alliance aiming to change the traditional declination of Europe. Among the others, the main connecting issue is immigration. ‘Stop to the immigrants’ and ‘another Europe free from the traitors as Merkel, Macron, Soros, Juncker’ are the slogans Salvini insists mostly in shaping his ‘Europe of common sense.’

Next to him are standing other representatives of the sovereign alliance, starting from the French leader of the Front National (FN), Marine Le Pen, and the Germans of the Alternative for Germany (AFD) to the far-right exponents of Finland, Czech Republic, Slovakia, Estonia, Denmark, Bulgaria. Since all parties see supranational integration as an unjustifiable intrusion into the prerogatives of national states, on May 18 they gathered in Milan as a cosmetic move of their ‘free and sovereign’ political manifesto.

Perceived as an historical moment, Marine Le Pen reiterated that “has come the time that all together we will give the whole Europe the signal of resistance, hope and re-conquest.” Wilders, leader of the Dutch party for Freedom (PVV), echoed: ‘enough diktat from the EU super-state, enough immigration, enough Islam,’ by adding: ‘We must stop immigration, stop Islamization. Once again: enough Islam. Salvini has already changed Italian politics and he is an example for all of us. No more ships with illegal immigrants.’

The architect of the new balance of power is the leader of the Italian League Matteo Salvini, whose task is to bring together all far-right forces in a new alliance.

Indeed, in the last year the 5Ms-League government with Matteo Salvini as Minister of Interior, Italy has reduced the immigration rate through the closure of its ports and the rejection of NGO ships carrying migrants rescued in the sea. However, those security decrees arose suspects and concerns worldwide. A recently released UN report states that ‘such restrictive migration policies contribute to aggravate the vulnerability of migrants and they serve only to increase human trafficking.’ In other words, without providing evidence on such restrictions it lays the ‘stigmatization of migrants as possible terrorists, traffickers and smugglers’ and eventually the climate of hatred and xenophobia will further increase.

Salvini did not lose chance to slam the UN by saying that “an international body that has among its members North Korea and Turkey, which are totalitarian regimes, and it comes to give moral lessons on human rights to Italy.” Actually, in his extreme nationalist approach the rhetoric against Turkey is not new, as several statements prove. Recent tweets read: “as far as I am concerned, Turkey will never enter the EU. Never” and: “Turkey is not and it never will be EUROPE. The accession process has to be canceled, it must definitively be stopped.” Hence, the ‘extremists of common sense’ pivoting on the League dream of a Europe as a confederation of Christian national states, contradicting the driving principle of that economic and political process started by the post-war period and culminated with the unification.

Despite all tensions, today is the benchmark of the European Union to be in crisis. The Schengen treaty implemented to guarantee the free movement of goods and people within the borders of the EU is nowadays under the pressure of migratory flows passing through the Mediterranean and crossing the Balkans. Even if the numbers tell that there is not a ‘huge invasion,’ as many Europeans fear, the migration issue has imposed itself at the center of the political debate.

In terms of people arriving by sea from the MENA (Mediterranean and North Africa) region, Italy is one of the leading countries in Europe. Therefore, domestically the fight against immigration has become a key issue. Furthermore, recent data reveal that some neighboring countries such as Germany, Austria and France used to send back to Italy a number of migrants higher than those who arrived directly to its offshore. From January 1 to May 8, 2019, 857 migrants landed in Italy, while in the same time 710 were sent back just from Germany, without considering the others.

The ‘extremists of common sense’ pivoting on the League dream of a Europe as a confederation of Christian national states, contradicting the driving principles of the European unification.

Being more exposed to immigration flows among European citizens, the Italians are the ones overestimating mostly the percentage of immigrants present in their own country. This implies a direct effect on their perception and feeling towards foreigners. A recent survey states that according to the interviewees, immigrants are about 18% more than the real figure. Compared to the European average (57%), 74% of Italian respondents believe that immigrants increase crime rates while 58% of Italians and 41% of Europeans consider immigration as a cause of unemployment. Certainly, this data is marked by a great level of hostility towards immigration as well as religious minorities.

Italy is confirmed as a country where hostility towards immigrants increases, so does the error in assessing their presence in the country. However, there is no single and scientifically accepted method for measuring xenophobia. Other indicators suggest a more complex Italian reality. The popular consensus to the League, which is currently the most radical party against foreigners and Muslims, is around 30% and it has recently showed a decline. Indeed, Italy has a volatile public opinion often manipulated by the press and influenced by politics. In general, Italians have no particular prejudices and when it comes to Islam and Muslim people, they prove to be mainly afraid of something they do not know: in Italy just 2% of the population is Muslim, a terrorist attack never occurred and, compared to other European contexts, the presence of extremists is very small. Thus, once Italians face concrete issues such as unemployment, economic crisis and absence of effective integration policies, the prejudice arises overall if legitimated by extreme political rhetoric.

Nevertheless, some alarming levels are reported in Europe. While monitoring 47 European countries, the European Commission against Racism and Intolerance of the Council of Europe (ECRI) denounces problems related to intolerant political discourses as well as a general anti-Muslim tendency in the editorial line of some media and online content. Extremist positions seem to proliferate overall on social media, aiming to polarize the political debate on migration and on fourth generation rights. Hence, there are reasons to consider it as a fertile ground for further anti-Islamic discourse or radical ideologies.

In this perspective, as a result of the collaboration between the European Commission, EU member states and leading IT companies – such as Facebook – have recently banned content of “praise, support and representation of nationalism and white separatism,” reinforcing what was already foreseen in the Code of Conduct on the illicit incitement to online hatred signed in 2016. The intervention aims to counteract any discriminatory treatment on ethnic, racial and religious basis used in the white supremacist rhetoric. Furthermore, according to a European Parliament survey (March 2018), religious-based discrimination perceived by Muslims living in Europe has increased from 12% in 2010 to 25% in 2016, and about a third of them started to have problems in their workplace.

In the United Kingdom, there is a growing anti-elitist feeling, which would hide a prejudicial representation of the reality, full of resentment and radicalism.

In the United Kingdom, the State of Hate report (February 2019) written by the group HOPE not Hate states that there is a growing anti-elitist feeling, which would hide a prejudicial representation of the reality, full of resentment and radicalism. As an example, it mentions the participation of around 10,000 people at the #FreeTommy protest organized in 2018 in support of the extreme right writer Tommy Robinson, author of anti-Islamic books and former leader of the English Defense League, a radical right-wing movement founded in 2009.

Moreover, in Spain, Javier Ortega Smith, the general secretary of the far right party Vox, was investigated for hate crime along a video shot in 2018 showing him uttering: “Our common enemy, the enemy of Europe, of progress, of democracy, of the family, of life, the enemy of the future it is called Islamist invasion.” Concerns have increased since last April and with 10 percent of the vote, Vox became the fifth party in the Spanish Parliament and there is room to believe that it will join Salvini’s alliance due to the friendship with Marine Le Pen.

There is no doubt that nowadays European sovereign extremism is nourished by certain nationalist-style discontent towards traditional politics and by the hostility towards immigrants, but the insufficient knowledge and self-perception on Islamophobia and xenophobia by EU states is a further obstacle in the fight against these prejudices.