Will Turkey's Activism for Culture change its Negative Image in Europe?

But will all this activism and enthusiasm at different levels – a veritable craze for UNESCO – be enough to change the negative perception of Turkey in Europe and in the U.S.? Time will tell, but a savvy and coordinated strategy with UNESCO as its center-piece seems the best way to make an impact in the long run. 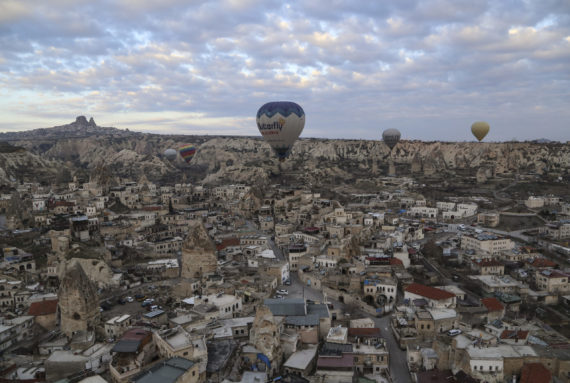 Hot air balloons glide in the sky during a trip over historical Cappadocia region, in Nevsehir, Turkey on March 22, 2017. Anadolu Agency

Bursa and Pergamon in 2014, Ephesus and Diyarbakır in 2015, Ani in 2016, Aphrodisias in 2017, Göbeklitepe in 2018. In the last few years, Turkey has been remarkably active in inscribing new properties on the UNESCO’s World Heritage List, the certified inventory of the most amazing cultural achievements of humankind and of the most fascinating landscapes on planet Earth. They are all considered of “outstanding universal value,” we should strive to preserve them for posterity.

These new inscriptions brought the Turkish total up to 18 sites, among which – already added in the past – Pamukkale/Hierapolis, the historical peninsula of Istanbul, the archeological site of Troy, and the national park of Göreme in Cappadocia. However, Turkey lags far behind Italy (54), France (53), or China (44) in the number of national sites on the list; its huge potential as a cultural powerhouse has hardly been fulfilled.

On the other hand, with 77 candidates in all of its regions (representative of different epochs from prehistory to Ottoman times), Turkey has the most extensive “tentative list” of prospective new inclusions; but since only one cultural and one natural sites are allowed in each year, catching up would take a few decades. For 2019, the nominations already advanced are those of the “Historic Guild Town of Mudurnu” and of the “Kızılırmak Delta Wetland and Bird Sanctuary” (it will be the first Turkish natural site).

This delay is entirely self-inflicted. Turkey ratified the World Heritage convention in 1983, 11 years after signing it; at first, the government opted for a low-key participation and presented new candidatures sporadically even though there was no quota at that time. It is the AK Party cabinet, more than 20 years later, that decided to play a leading role in the Educational, Scientific and Cultural Organization of the United Nations.

In 2009, it established a dedicated and highly professional Department of World Heritage Sites (Dünya Miras Alanları Şube Müdürlüğü, a special bureau of the Ministry of Culture and Tourism) tasked with supporting new applications and implementing management plans for the inscribed properties; all of them were judged positively by the UNESCO experts and by the other members states.

Turkey also started to increase its financial contributions and took a more visible and dynamic stance inside the organization. UNESCO became one of the many component of a complex but coherent strategy – along with the Yunus Emre Institute and the Alliance of Civilizations, at different levels – to enhance the country’s international reputation through culture and history, turning its rich and multi-layered past into an asset of soft power and into a marketing tool to attract new cultural tourists.

Turkey’s upgraded status is demonstrated by its election – for the second time – to the World Heritage Committee in 2013 (for a four-year period), and by the choice of Istanbul as the venue for its annual gathering – where new inclusions are decided – in 2016; unfortunately, this last event took place the very week of the 15th of July coup attempt and it had to be cut short hastily.

Next December, the Turkish government will also host – in Istanbul again – the World Conference on Tourism and Culture, jointly organized by UNESCO and the Unwto (the United Nations’ agency for tourism) to discuss how to protect the cultural heritage of mankind while providing new opportunities for local and sustainable development – “For the benefit of All,” as the summit’s slogan says.

This new approach makes Turkey more responsive to new opportunities. Therefore, when the new list of the Intangible Cultural Heritage was established in 2012 – to protect and promote music, dance, cuisine, crafts, performances, traditional sports – it immediately finalized multiple candidatures and is one of the most successful countries with 16 elements already inscribed, such as the Mevlevi sema ceremony, the kırkpınar oil wrestling festival, the culture and tradition of Turkish coffee, the art of marbling (ebru), or the traditional craftsmanship of çini-making.

All these successful nominations show a strong degree of cooperation – something not very common in Turkey – between state bureaucracy, local administrations, civic society and even the private sector (in a few cases such as Aphrodisias and Göbeklitepe it provided financial support and managerial skills). Municipalities big and small seem keen on being at least “tentative candidates;” over the summer the Turkish press was full of articles quoting mayors wishing their archaeological sites or museums to join the international circuit of cultural tourism through UNESCO.

Other administrators decided to join another UNESCO initiative, the “Network of creative cities:” Antakya and Gaziantep for gastronomy, Istanbul for design, Kütahya for craftsmanship. Universities are taking part in the process as well: Kadir Has established a “UNESCO Chair on Management and Promotion of World Heritage Sites” in 2015, Bilgi launched its own “UNESCO Chair in Cultural Policy and Cultural Diplomacy” two weeks ago; their main goals is to train technical experts and to raise awareness of the Turkish cultural heritage nationally and abroad.

But will all this activism and enthusiasm at different levels – a veritable craze for UNESCO – be enough to change the negative perception of Turkey in Europe and in the U.S.? Time will tell, but a savvy and coordinated strategy with UNESCO as its center-piece seems the best way to make an impact in the long run.

Giuseppe Mancini is an Italian political analyst and journalist based in Istanbul. He writes on cultural politics, museums, archeology, heritage and public history.