If Trump chooses the “minimum strike” option by targeting more than one place including aircraft bases, ammunition stores and command centers of the regime, then the price will be quite high for Assad, and probably for Russia, as well. 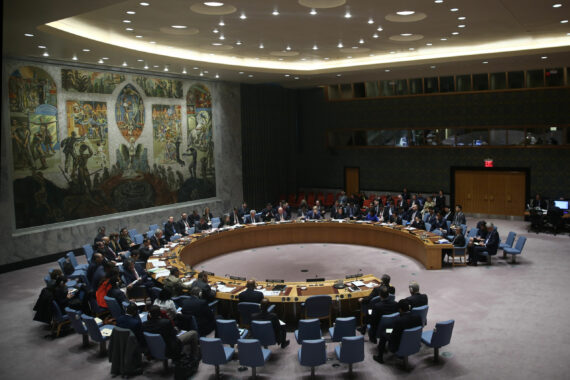 A general view of the UN Security Council meeting on chemical weapons in Syria, is seen at the United Nations Headquarters in New York, United States on April 4, 2018. Anadolu Agency

Last week, the rebel-held Douma city in Syria experienced apparent chemical weapon attacks. There is no doubt that the use of chemical weapons is consistent with the past behaviors of the Syrian regime. This development was not the first in Syria’s history. Since 2013, there have been dozens of chemical attacks carried out by the Syrian government itself. The regime has repeatedly employed chemical weapons towards the areas under opposition control, as documented by international bodies such as the United Nations and other nonpartisan international organizations. Chemical attacks fit within the broader policies of the Syrian regime and were used against civilians in the past. Particularly during the Syrian uprising, chemical attacks were used as part of a broader strategy of the regime in rebel-held areas. Leaving Assad’s chemical brutality against civilian targets aside, what made the attacks possible, among other things, is more important than the chemical attacks themselves. First and foremost, it was the lack of sufficient legal, diplomatic and military deterrence displayed by the international society.

For instance, following the Syrian regime chemical attack against the civilians in Khan Sheikhoun in August 2017, the U.S. launched 59 Tomahawk cruise missiles, which were limited to a Syrian base in Homs. Trump’s tactic of military engagement into the Syrian crisis after the chemical attack was part of the U.S.’ global “face-saving” strategy. Actually, the use of chemical weapons was not against Syrian civilians per se, but it was an attempt that undermined the normative nature of the universal values of humanity, which are perceived as an integral part of the western-centric liberal international order. Therefore, with a very limited and single target selection strike, Trump’s first intervention caused no concentrate loss for the Syrian regime. Trump’s first intervention against the Syrian regime also lacked a follow-up strategy to ensure lasting damage.

This time, the reaction of western powers was the same. The use of chemical weapons against civilians was not treated because many civilians were killed by the Syrian regime; rather it was framed as an integral part of the Assad’s “animalism” as expressed in a tweet shared by Trump. The Syrian regime’s use of barrel bombs since the beginning of the Syrian crisis has never been associated with this kind of concept, even though using barrel bombs is also against international humanitarian law. Now the U.S. and the countries which support a strong and joint reaction against the Syrian regime worry about the overall “Syrian strategy.” However, the situation appears very different in Syria in the eyes of the Trump administration, and this time, the president seems to change his policy in general. This is interesting since the president announced the U.S. military withdrawal from Syria last week.

There are two broader objectives of the U.S. in Syria when it comes to expected military interventions. Firstly, the Trump administration wants to effectively deter the use of all chemical weapons in Syria held by the regime. Secondly, without any doubt, the U.S. security establishment seeks to push back on the Russian/Iranian influence in Syria. This objective became a priority following the Russian involvement in the Skripal spy game in the U.K., and the increasing criticism against Putin in the U.S., as well. Trump himself is now against Putin as following the chemical attack he tweeted: “Get ready, Russia, because they (missiles) will be coming.”

To achieve these two broader objectives, the nature of military strikes in eliminating the Syrian regime’s chemical weapon capacity and the Russian/Iranian influence in the country should be evaluated critically. Even though Trump has no coherent strategy in Syria, the type of military intervention may change something on the ground. If Trump chooses the “purely punitive strikes” method to make the international community feel better about the retaliation against the brutality of the Syrian regime, then this will be the recurrence of the last missile strike that caused no considerable strategic costs for Assad. If Trump chooses the “minimum strike” option by targeting more than one place including aircraft bases, ammunition stores and command centers of the regime, then the price will be quite high for Assad, and probably for Russia, as well. However, this option also reserves some risks and opportunities for the U.S.

It is risky because a direct military confrontation with Russia is of high probability. It is an opportunity for the U.S. because the Syrian regime would feel more insecure and lose a good percentage of military capacity. If the president chooses the “extended strike” method this will serve the broader purpose of undermining the regime’s military capabilities. This type of military intervention needs to take the duration variable into consideration, which means that the strikes would continue for more than one day. This option may provide more opportunities for the rebel groups in Syria while generating costs for the Syrian regime. However, the collapse of the Syrian government may also bring more chaos to the entire country at this stage. The second risk of a direct military confrontation with Russia is also valid for this option.

If the objectives of the proposed action cannot be linked to a coherent strategy, Trump’s new Syrian game will not be effective in deterring the Syrian regime’s brutality and in undermining its military capacity. Therefore, it is possible to argue that military action far from the “reality” of the geopolitics of the Syrian crisis would not otherwise matter.