On his trip to Brussels on Monday, Israeli Prime Minister was reminded by the EU’s foreign policy chief, Federica Mogherini, that Jerusalem is the capital for both Palestine and Israel and that the EU’s stand on the holy city remains unchanged. 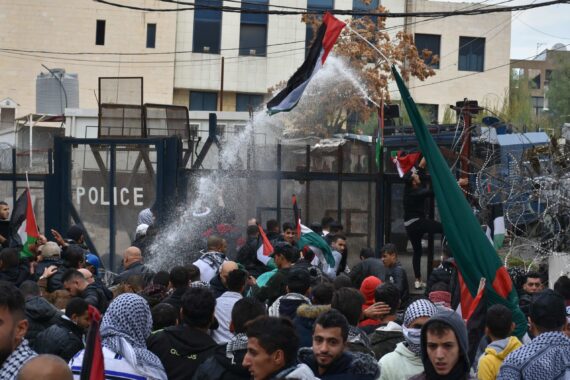 ebanese police members intervene to protestors using water cannon as they gather near the police barricades to enter U.S. Embassy in Beirut during a protest against U.S. President Donald Trump's announcement to recognize Jerusalem as the capital of Israel, on December 10, 2017 in Beirut, Lebanon.

Muslims across the world continue to protest against Donald Trump’s announcement on December 6, 2017 to declare Jerusalem as the capital of Israel. Jerusalem is revered by Muslims as the first Qibla (the direction to which Muslims turn their faces while praying) as well as by Christians.

Protests have spread to a number of Muslim countries in the Middle East, North Africa, South Asia, and East Asia.

Palestine has historically been a unifying point for Muslims, and most analysts consider Donald Trump’s announcement last week as a reckless move that can trigger more flames in the already burning Middle East.

In Turkey, whose president Recep Tayyip Erdogan has been at the forefront in condemning Trump’s move, calling the decision as “null and void” for Turkey, thousands of people took to the streets in Istanbul with Turkish and Palestinian flags, chanting pro-Palestinian slogans. Erdogan, meanwhile, called a summit of Islamic countries to discuss the Jerusalem issue on Wednesday.

In Indian-occupied Kashmir, the territory which has been fighting for its independence for as long as Palestinians, protesters maintained their traditional approach. As against Indian atrocities, they closed shops and other businesses in protest of the decision.

As if to rub salt on wounds, a civil society group comprising people from different religions and sects, on Monday visited Israel at a time when Muslims feel outraged because of the Jerusalem move. The 25-member delegation from the tiny Shiite majority Arab Gulf country defended its five-day long visit as a “gesture of tolerance.” The group includes Sunni and Shiite leaders, Christians, the leader of a Hindu temple, and a Sikh.

However, Palestinians promptly refused to allow the group to enter Gaza for its being as the agent of normalization at a time when Israel has crossed the “red line.”

On his trip to Brussels on Monday, Israeli Prime Minister was reminded by the EU’s foreign policy chief, Federica Mogherini, that Jerusalem is the capital for both Palestine and Israel and that the EU’s stand on the holy city remains unchanged.

Mogherini said, “We believe that the only realistic solution to the conflict between Israel and Palestine is based on two states with Jerusalem as the capital of both.”