The international community must put pressure on particularly Saudi Arabia and Iran as well as their local proxies to come to the table in order to find a peaceful solution to the years-long crisis in Yemen. Otherwise, civilians will continue to pay the price of a regional power struggle between rival ideologies. 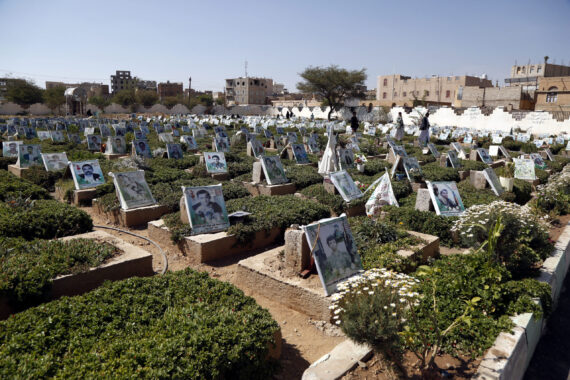 Yemenis are seen among graves of people who were killed in the ongoing war including children killed by airstrikes, at a cemetery on October 12, 2018 in Sana’a, Yemen. Getty Images

Yemen’s revolutionary uprisings in 2011 soon evolved into a complicated crisis that involved many regional and international actors. As in the case of Syria and Libya, the political uncertainty and instability in the country deepened as the intervention of external actors increased. The following process caused a spill-over in the conflict. Today, Yemen is witnessing a struggle between the Saudi-led coalition and the United Arab Emirates, and the Houthis supported by Iran.

The most damaging consequences of the political disagreement and power struggle in the country are on the civilians. The Saudi-led Operation Decisive Storm, which began in 2015, caused the death of a significant number of civilians. Despite the fact that Saudi Arabia had supposedly changed the nature of the operation into a political process by replacing Decisive Storm with Restoring Hope, Riyadh and its allies continued to use disproportionate attacks on civilians. According to international observes, the number of civilian casualties exceeded ten thousand, including children that constitute around 20% of these losses.

Although Saudi Arabia replaced the Operation Decisive Storm with the Operation Restoring Hope with an emphasis on the diplomatic process, Riyadh and its allies still attack on civilians disproportionally.

Increasing intensity of violence and the blockade that has been imposed on the Houthi-led areas in Yemen has created dire conditions for civilians. It has been reported that due to the blockade, at least 5 million people are in risk of losing their lives due to famine and shortage of medical support. This has been closely monitored by international organizations, as well as media channels that have shared heart-breaking images of children who are struggling to survive due to starvation. This has forced the international community to make calls for the termination of the humanitarian crisis in Yemen.

It can be argued that the global public opinion believes that Saudi Arabia and the UAE are the main actors responsible for the humanitarian catastrophe in Yemen. Although the Iran-backed Houthis also play a role in the deepening of the conflict, the use of disproportionate force by the Saudi-led coalition on civilians has caused humanitarian problems on the ground. Both regional and international actors have criticized the coalition due to its targeting of civilians and causing the death of thousands of Yemeni children and women.

In a report published by the United Nations in August, it was noted that the coalition forces led by Saudi Arabia undermined serious human rights violations in Yemen. The report also stated that coalition forces bombed civilian settlements, market places, funeral ceremonies, weddings, fishing boats, and health clinics, and that these situations could be evaluated within the scope of war crimes.

On the other hand, another significant development in this sense is the fact that some Western countries have decided to stop their arms sales to Saudi Arabia and the UAE due to their human rights violations in Yemen. Most recently, German Chancellor Angela Merkel announced that Germany would no longer approve future arms deals to Saudi Arabia. A similar decision was taken by Spain and Norway. In addition, many influential groups in the U.S., U.K., and Canada have been putting serious pressure on their respective governments in order to cancel their arms deals with these two countries in the Gulf.

To end the suffering of the Yemeni people, the international community must put pressure on Saudi Arabia and Iran and their local proxies to come to the table.

It is therefore clear that the international community is uncomfortable with the war in Yemen. However, the humanitarian crisis in the country still does not play an important role in the agenda pursued by global actors in regards to the Middle East. Issues such as the Syrian Civil War, the Israeli-Palestinian conflict, Daesh, and the migration of Syrian refugees to Europe are considered to be more serious issues than the Yemen crisis. At this point, it is of great importance for countries like Turkey, who can play a game changer role in the Middle East, to act responsibly and put pressure on the warring parties in order to stop their activities.

The international community ought to take a stance and help to end the suffering of the Yemeni people. The international community must put pressure on particularly Saudi Arabia and Iran as well as their local proxies to come to the table in order to find a peaceful solution to the years-long crisis in Yemen. Otherwise, civilians will continue to pay the price of a regional power struggle between rival ideologies.