Since the launch of the Operation Claw by Turkey, the PKK has lost strategic hills in the Hakurk region, and the PKK has accused the KRG of collaboration with Ankara. YPG's recent move against Kurdistan 24 can also be seen as an attempt to retaliate in the name of the PKK against the KRG in northern Iraq. 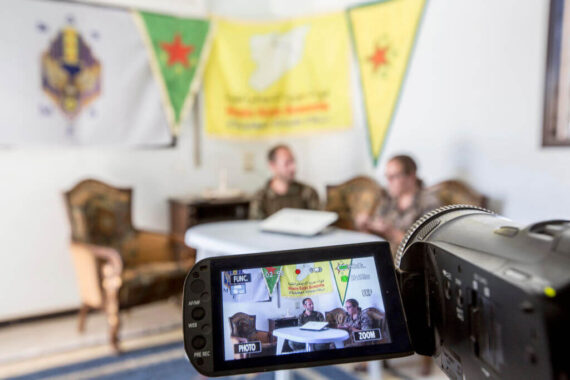 British volunteer fighters Macer Gifford (left) and Zilan (right) both from the UK broadcast their disbelief after reading a BBC article stating that any foreign volunteer fighting for the YPG (Syrian branch of the PKK terrorist organization) are risks to the UK's national security on August 18, 2017 in Raqqa, Syria. Getty Images

On 2 September, 2019 the pro-Kurdish media outlet Kurdistan 24 stationed in the Kurdish Regional Government (KRG) released a public statement explaining that while they have previously worked in northeastern Syria with the permission of the local YPG administration, they were recently banned from doing so. Despite an approximately one month long negotiation, Kurdistan 24 failed to convince the YPG administration to remove the ban. Kurdistan 24’s ability to report from YPG-held areas ended when Kurdistan24 TV aired a talk show in which Hülya Oran (alias Besê Hozat), a leading PKK figure and KCK (PKK’s administrative umbrella) co-chair, was allegedly insulted. This decision by the YPG not only confirms its status as the Syrian branch of the PKK, but also highlights their hypocrisy as self-proclaimed defenders of freedom and of the Kurdish cause. This step is also noteworthy since it comes after growing tensions between the KRG in Iraq and the PKK.

The decision of the YPG to ban Kurdistan 24 shows again that the YPG and the PKK terrorist organization are inseparable organizations. Reports that the YPG’s decision making bodies are dominated by PKK veterans from the Qandil Mountains appear to be corroborated. The ban of the Kurdish media outlet by the Kurdish Regional Government (KRG) in Iraq is not surprising, as the head of the US supported Syrian Democratic Forces, Ferhat Abdi Sahin (alias Mazloum Kobane in the SDF, and Sahin Cilo in the PKK), was close friends with Hülya Oran and were active in the Qandil Mountains together. Furthermore, most of the SDF officials answered to orders from Oran in northern Iraq and Turkey, before they went to Syria to operate as partners of the US.

It is interesting that the YPG’s relative openness to media and press ended when a leading PKK figure was criticized. The media has been as an essential part the YPG’s strategy of winning hearts and minds in the west by portraying themselves as defenders of human rights, and especially women’s rights. For this reason, many foreign journalists can enter YPG-held areas and report about the situation on the ground. By doing this, the YPG won many sympathizers among the western journalists and effectively disguised its nature as a branch of the internationally recognized terror organization, namely the PKK. Remembering the critical coverage of some journalists of the YPG, one wonders if it is the case that the YPG doesn’t allow criticism of senior figures of the PKK only, or if the YPG has different standards for Kurdish and western media outlets.

Lastly, this move by the YPG can also be seen as an attempt to retaliate in the name of the PKK against the KRG in northern Iraq. Since the launch of the Operation Claw by Turkey, the PKK has lost strategic hills in the Hakurk region, and the PKK has accused the KRG of collaboration with Ankara. Attempts by the PKK to provoke the local population against the Turkish Armed Forces were undermined by Prime Minister Nacirvan Barzani who blamed the PKK for an attack on a Turkish base and demanded the PKK withdraw from northern Iraq, so that Turkey could stop its operations against them. The step to ban Kurdistan 24 overlaps with a time in which the Iraqi Kurds actively supported Ankara’s fight against the PKK, and might be a way of retaliation.