Zarrab turns into a foreign policy tool for the US

The mass majority of US media - most importantly the New York Times, which has been covering every development of the Zarrab case - has turned Zarrab into a "hero" now for the simple fact that he is ready to throw mud at the Turkish government. 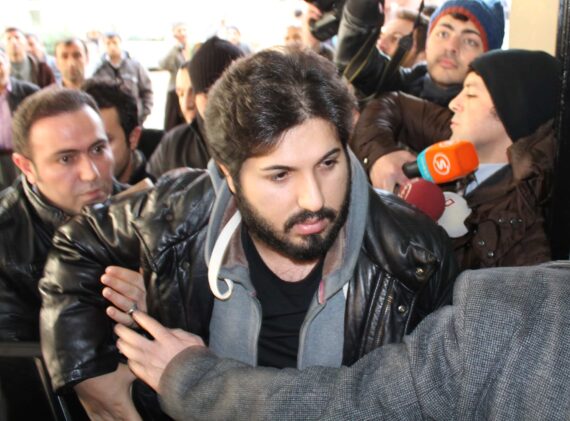 The Turkish government charges on the United States on many issues related to national security, including the extradition of Fetullah Gulen, the leader of the FETO criminal cult, which carried out the July 15 coup attempt, support for YPG/PKK and recently Turkish-Iranian businessman Reza Zarrab episode. Zarrab was detained in the US last year for violating the US sanctions against Iran, the US government has begun to play its cards.

When Reza Zarrab was exonerated last week from facing trail by the US District Judge Richard Berman, it was interpreted as a positive response from the US government. However, soon it was realized that Zarrab had turned into the US government’s foreign policy tool to counter Turkish demands of Gulen’s extradition and halting support for the YPG.

Zarrab decided to “cooperate with the US authorities” and to testify in the case of Mehmet Hakan Atilla, a former deputy CEO of Turkey’s Halkbank – also accused in the same case. However, Zarrab claimed that he bribed former Turkish economy minister Zafer Caglayan in 2012 as part of a billion-dollar scheme to smuggle gold for oil, thus violating the United States sanctions on Iran. He even directly attacked the Turkish President Recep Tayip Erdogan, claiming to have heard from Caglayan that the then Prime Minister ordered banks to participate in the scheme. While Zarrab’s mention of Erdogan was second hand information and with no evidence at all, neither the judge nor the jury raised this issue.

However, the fact that the US sanctions are not binding on Turkey because they are not sanctions agreed on by the UN, is clearly ignored in this matter.

As shocking as these claims are against the Turkish government, which has been for a year trying to aid Zarrab in this case by repeatedly appealing to the US government for his acquittal, his surprising turn itself draws suspicion.

Already in Turkey the sentiments are high against the US for its support to the YPG and FETO, and its lukewarm response to last year’s coup attempt that killed more than 250 people and left thousands injured. The current Zarrab episode must be seen in this backdrop across Turkey.

In a column in Hurriyet Daily newspaper journalist Cansu Camlibel, who attended the week-long testimony of the 34-year-old Reza Zarrab at the US District Court for the Southern District of New York in Atilla’s case, wrote about the drama of Zarrab’s claims. Cansu points out his unusual confidence and preparedness that he could have most probably drawn from his collaboration with the FBI and prosecutors after he decided to cooperate with the US government.

“How flawlessly he drew two separate diagrams on a white board in the courtroom to describe the steps used to withdraw Iran’s oil and gas money from Halkbank, and use that money to make international payments on behalf of Tehran, indicating that he had rehearsed this little act for many weeks with the prosecutors,” wrote Cansu.

There is much to indicate that Zarrab, just like Gulen, has become a new tool for some circles of the US government to take on the Turkish government. The mass majority of US media – most importantly the New York Times, which has been covering every development of the Zarrab case – has turned Zarrab into a “hero” now for the simple fact that he is ready to throw mud at the Turkish government.

What is to be seen is to what extent the Turkish government can respond to Zarrab’s claims. His assets have already been seized in Turkey and 17 people who have been working with him, including three suspects, Sinem A., Regaip A., and Mustafa H., have been arrested. They are accused of sending documents to the US concerning his legal proceedings there.