Turkish fighter jets take off from Incirlik airbase towards Syria

While some Turkish fighter jets took off from the base, others remained on alert. Meanwhile, military cargo planes kept arriving and leaving the base. 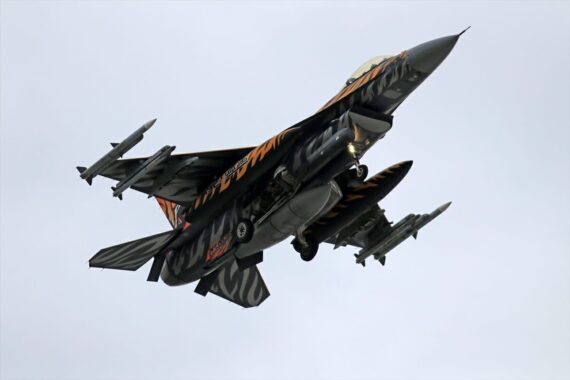 Turkish military aircraft is seen at the Incirlik 10th Tanker Base Command in Saricam district, in Adana as the "Operation Olive Branch" continues in Afrin on January 21, 2018. AA

According to information gathered by an Anadolu Agency correspondent in the area, some movement was seen at the 10th Tanker Base Command of Incirlik Base as part of the ongoing ‘Operation Olive Branch’.

While some Turkish fighter jets took off from the base, others remained on alert. Meanwhile, military cargo planes kept arriving and leaving the base.

The operation — aimed at eliminating PYD/PKK and Daesh elements from Syria’s Afrin — was launched at 5 p.m. (GMT1400) on Saturday. It was being carried out under the framework of Turkey’s rights based on international law, UN Security Council’s decisions, self-defense rights under the UN charter and respect to Syria’s territorial integrity, the military added.

The PYD/PKK depends on Afrin to connect to the Mediterranean from northwestern Syria.

The terrorist organization has also threatened the gains made from Operations Euphrates Shield and Idlib de-escalation zone over Afrin.

A quarter of Syria land and 65 percent of Turkey-Syria border are currently under occupation of the terrorist organization.

Operation Euphrates Shield began in August 2016 and ended in late March 2017 to improve security, support coalition forces and eliminate the terror threat along the Turkish border.