How Turkey Has Changed its Counter-Terrorism Policy Against the PKK

This is the first comprehensive counter-terror operation against the PKK. This time, the military strategy is not only targeting to eliminate PKK terrorists but also aiming to clean and hold the territory where the PKK has any presence. 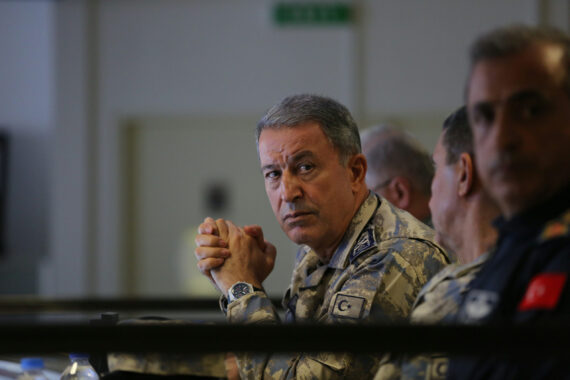 Turkey’s counter-terrorism strategy has undergone a massive transformation, particularly in the fight against the PKK, while the extra-territorial military operations have expanded towards Syria and Iraq where the PKK has been consolidating its political and military influence since the dissolution of the Syrian and Iraqi sovereignties.

Turkey began to operationalize its new counter-terrorism strategy with Operation Euphrates Shield (2016) in Syria and carried out its military operation against the PKK in Afrin with Operation Olive Branch (2018). Even though, these two military operations have different geopolitical aspects and execution methodologies, both military operations had the same strategic objectives: to de-territorialize the PKK in Syria, to eliminate its military capacity including manpower, and to weaken its international cooperation especially with the countries that provide militarily and political support to the PKK since the rise of DAESH.

Turkish authorities believe that the reactionary struggle against the PKK is not the best strategy to degrade and defeat the PKK’s terrorist campaign against Turkey. The best approach, according to Turkish authorities, should be designed by considering three interrelated variables: political decisiveness, Turkey’s military advantages and sustainability of military operations not only within Turkey but also in extraterritorial spaces such as Syria and Iraq.

Political decisiveness became a central element of the new counter-terrorism strategy following the collapse of the peace process in 2015. Turkish security forces have been able to defeat the PKK’s violent activities through domestic counter-terrorism operations; even though the PKK aimed to establish “liberated zones” by implementing violent urban tactics to widen the conflict zones towards significant city centers in southern Turkey.

The central rationality behind the PKK’s strategic consideration was the Syrian Civil War, in which Turkey has had to deal with many security and political challenges. In such a conflictual environment, the PKK could enjoy its territorial expansion. However, Turkey’s early military reactions against the PKK in the city centers of southeastern Turkey during the urban conflict between 2015 and 2016 have made substantial progress, and the PKK lost its entire terrorist mobilization and public support across the region.

Following domestic-counter terrorism operations, Turkey started to expand its actions towards the PKK in Syria. During this period, Turkey’s priority was to roll back the PKK’s geopolitical expansion along Turkey’s Syria border. Afrin, in this context, was a strategic threshold for Turkey to see how Ankara would be able to maintain its political decisiveness under the regional security vacuum that was somehow antagonistic and the U.S.’s apparent strategy over the presence of the PKK in Syria in the fight against DAESH.

Turkey’s military advantages along with its increasing capacity in defense technologies became central to sustain its military operations and ultimately defeated the PKK in Afrin. Operation Olive Branch resulted in a military and political victory for Turkey. Following the 58 days of the clash, the PKK was defeated and had to leave from the city centers. Following the triumph of Afrin, the Manbij agreement with the U.S. over the issue of the PKK presence showed how Turkey used its political decisiveness and military capacity to change the facts on the ground. From a domestic counter-terrorism struggle to Afrin and Manbij, Turkey has also shown its willingness regarding the continuation of the military offensive against the PKK, even though the regional and international conjuncture is against this policy.

Now, Turkey aims to maintain its counter-terrorism strategy against the PKK in Qandil where the PKK has settled as a safe haven thanks to the lack of Iraq’s sovereignty, the geographical sophistication of the region and the military capacity that the PKK has been building for almost 40 years. At his stage, Turkey has similar strategic goals: securing its border security against terrorist infiltration, eliminating the PKK’s presence in northern Iraq by holding terrorist camps in the region to isolate the PKK from its stronghold in Qandil and preventing the logistical mobilization of the PKK.

Turkey’s military operation now targets the PKK’s two strategically important locations in the region: Khakurk and Qandil. Turkish forces have already secured almost 500 sq. km in Khakurk and opened a safe corridor that reaches the Qandil Mountain since the beginning of the operation in March 2018. This time, the military strategy is not only targeting to eliminate PKK terrorists but also aiming to clean and hold the territory where the PKK has any presence.

The execution of military tactics in operational level on the ground is different compared to the OOB and OES in Syria due to the topographical feature of the region. But, the political decisiveness, Turkey’s military advantages, notably its technological superiority over the PKK, and willingness to maintain military operations toward the center of the Qandil Mountains seem to change the nature of the conflict between Turkey and the PKK.

This will be the first comprehensive counter-terror operation against the PKK. The regional dynamics are also behind Turkey’s military offensive. If Turkey can manage the dynamics emanating from the Kurdish Regional Government (KRG) and the central Iraqi government in favor of its new strategy, the PKK cannot sustain its presence in the region. But this does not necessarily mean that the PKK threat for Turkey will disappear in the near future.

At this stage, there are two critical strategic challenges for Turkey in its fight against the PKK. The first challenge is about the question of how the PKK will transform its overall strategy in Syria and Iraq after the fall of Qandil. More importantly, the real challenge for Turkey is whether the PKK can find another safe haven in Syria or Iraq. The second challenge for Turkey is about the question of how Turkish military can maintain its military presence in northern Iraq particularly in the Qandil area. The Defense Minister of Turkey announced that Turkey would not withdraw its military force until the PKK is ultimately defeated in Iraq.

Turkey now has 14 different military bases in northern Iraq. Compared to the previous military operations against the PKK in this region, the presence of Turkish military troops in different places provide more space to maneuver. However, the continuation of Turkey’s military presence might undermine the relations between Ankara and Baghdad. Therefore, the success of the new counter-terrorism strategy is also part of a regional agreement between Iraq, Turkey, and Iraq against the PKK. Iran is currently neutral toward Turkey’s ongoing operation. If Turkey’s military strategy can succeed in the short term to defeat the PKK in Iraq, then reaching a midterm consensus between Turkey, Iraq, and Iran will be easier.