1982 Constitution and the Politics in the Grip of Bureaucratic Tutelage

These being the basic functions of a constitution, the Turkish Constitution of 1982 brought forth, since it came into force, a rather precarious situation for the Turkish legal and political systems. 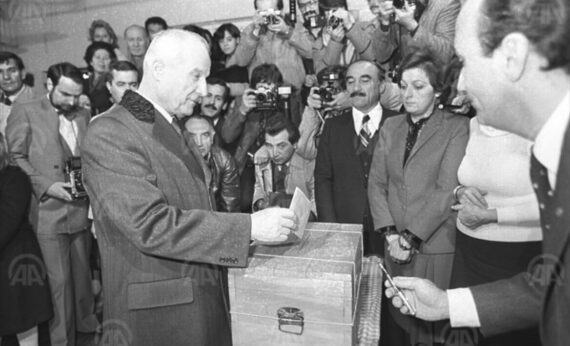 The 1982 Constitution and the Limits of Politics

As the determinants of the legal norms forming a state a constitution provide the main references to regulate state agencies and draw a general frame for the fundamental rights and duties of all. This aspect of a constitution defines its legal character. Thus the entire legal structure of a state is basically defined by its constitution, written or unwritten, which theoretically laid down the superior ground norm for its functioning. Moreover, a constitution, as a part of its technical function, transfers the values, that would dominate the political organization of the state, to a normative platform. At this point a constitution outstrips its legal nature and gains an extrajudicial identity.

These being the basic functions of a constitution, the Turkish Constitution of 1982 brought forth, since it came into force, a rather precarious situation for the Turkish legal and political systems. For this reason, the 1982 Constitution could be named as an “anti-constitution” for its objective is ‘to guard’ the state against society. The result, as far as more than thirty years of experience has shown, is that this constitution makes a preference for the side of the state in the individual-state balance when applied by a narrow literal approach. This constitution makes the individuals’ rights and freedoms vulnerable against the state authority by the means of sacralisation. Its preamble and unchangeable provisions attest to the uncompromising nature of the 1982 Constitution.

As a product of the coup d’état which took place in September 1980, the 1982 Constitution served, in line with the mind-set of the interventionist high-ranking officers, to ensure military tutelage over the political and the public spheres. The authorized bodies of judiciary, executive and legislation were regulated in accordance with the framework drawn by the founding ideology. Furthermore, steps were also taken to inhibit the actors who would use these bodies in future to overstep the “red lines” which had been determined during the constitution making- process. The very natural consequence of this situation was to prevent possible leakages of opposition which are realizable through democratic elections.

The Institutional Structure of the Bureaucratic Tutelage

The 1982 constitution carries an ideological view of social life and determines its borders. Secularism and nationalism laid down the main components of this view. The unchangeable first three provisions provide the textual basis of this mechanism. The constitution highlighted two main factors in the bureaucratic tutelage system, one being the judiciary while the second is the president office. Both of these institutions enjoy broad authorities but they are mainly politically unaccountable.

The judiciary ensured the politics to become judicialized by the means of transforming “independence of judiciary” into a myth. This way, not only the power domain of political authority was restricted but also those political parties which were considered dangerous have been closed down and pushed out of the system by the Constitutional Court.

It is a fact that the negative scene in question has lost ground by the democratization attempts of the Justice and Development Party (AK Party) within the scope of harmonization process to EU. These resulted in strengthening the civil politics.

The presidency could be considered as the other institution undertaking the carrier role of tutelage of the 1982 constitution. This continued to be the case until the constitutional amendment made in 2007. The mission attributed to this institution could be seen clearly by considering the constitutional powers and duties given to the president. The president, who has been elected by the parliament until 2007, exercised executive powers other than being only a figurehead as it is in the parliamentary regimes and was subject to slightest pressure to accountability. Thus, the president office turned out to become a vital instrument of tutelage. There are two dimensions of the constitutional nature of this office. First is the rather familiar and proclaimed role of the President of the Republic and the second is its capacity to strengthen the bureaucratic tutelage mechanisms. Moreover, the interventions made on the presidentially determined political domain of the Constitutional Court by both the president and the court members could be indicated as the clear evidence to this situation.

Obviously, the military and bureaucratic tutelage functioned with the contributions of the actors apart from two institutions. For example, the National Security Council (Milli Güvenlik Konseyi-MGK) which remained under the control of the military until 2000s or the High Council of Judges and Prosecutors (Hakim ve Savcılar Yüksek Kurulu-HSYK) as being the protectors of a specific ideology in judiciary were the effective institutions of this order.

It is a fact that the negative scene in question has lost ground by the democratization attempts of the Justice and Development Party (AK Party) within the scope of harmonization process to EU. These resulted in strengthening the civil politics. Two vital steps were taken to downgrade the tutelage by the constitutional amendments made in 2007 and 2010. By these amendments, presidency and judiciary, as the two vital institutions of tutelage, have become more accountable from a democratic viewpoint.

According a major amendment made in 2007, the president was to be elected by a popular election, which was practiced for the first time in 2013. Also, in 2010 the Constitutional Court and the High Council of Judges and Prosecutors were restructured to obtain a more democratic judiciary. Nonetheless these amendments remark to an unfinished ideal. The failures of the current state system and the revision of the position of bureaucracy toward democratic institutions still call for further steps.

The empowerment of the politics against bureaucracy has not been implemented only in constitutional dimension. Several steps have been taken in order to overcome centrist state administration by essential regulations and to strengthen the local administrations. Thus, efforts were made to create a transparent, politically elected and accountable administration mentality.

Recent public surveys show that approximately 70% of public demands a new constitution. The incapability of the Turkish Parliament to secure a new constitution bears the potential of undermining its credibility in the eyes of the populace.

The constitutional reconciliation commission which following the November 2015 elections resumed its activities offers an historic opportunity for drafting a new constitution. The political parties in the parliament need to take advantage of the connective and participatory power of the commission in order to increase the credibility of politics in the eyes of public and keep their promise for “new constitution”. However, that CHP has left the commission lately has a risk to miss this opportunity.

The constitution of 1982, which has been amended quite a few times since the day it was put into operation, failed not only to meet the popular demands but also to come up with a coherent and stable political mechanism. The gap left by legal politics has in time been filled by a bureaucratic tutelage which further complicated the functioning of Turkish politics. Despite many democratic steps taken by various AK Party governments the rationalization of Turkish politics and furthering the powers of legal political actors cannot be duly secured without a new constitution. On the other hand it should not be forgotten that the success of the new constitution making process is not only a structural imperative but it is also strongly demanded by the public. For this reason, elimination of the “presidentialism-centered” approach toward the new constitution issue of Turkey would provide a sound basis for the discussions.

Serdar Gülener received his graduate and MA degrees from the Public Administration Department at Sakarya University. For his PhD research he investigated the democratic legitimacy problem of the Turkish Supreme Court and focused, as a case, on the Constitutional Judiciary and Parliament Relations. As an Assoc. Prof. he currently teaches at the Faculty of Political Science at Sakarya University.