Today, China is governed by a communist regime under single party rule, and is proud of having arrived at a significant stage as the second biggest economic power globally. This, however, represents just one part of the reality China is facing. 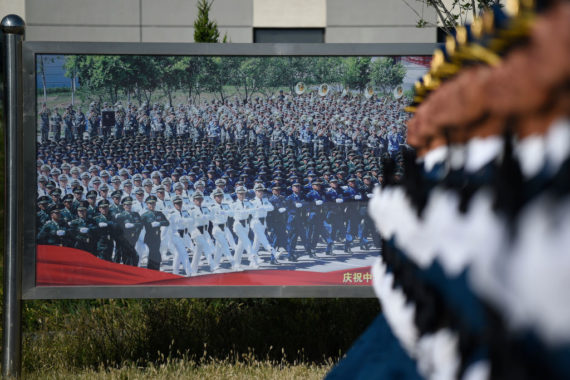 Chinese troops practice marching in front of a billboard ahead of a October 1 military parade for celebrating the 70th anniversary of the founding of the PRC, September 25, 2019 in Beijing, China. Getty Images

This October marks the 70th anniversary of the founding of the People’s Republic of China. The Chinese government has been preparing for this anniversary by organizing a massive military parade. A show of force which will display the outcome of the country’s economic modernization.

In this regard, this event will be more than a mere joyful celebration of the China’s rising power that will be observed globally. It also reflects the historical remembrance of a communist nation-state which emerged just after World War II, in the aftermath of a civil war between two ideological divisions, that of Chinese nationalism and communism.

In light of this historical staging, today, China is governed by a communist regime under single party rule, and is proud of having arrived at a significant stage as the second biggest economic power globally. This however represents just one part of the reality China is facing.

The first issue is the state’s political ideology being distinct from economic ideology. Despite being a communist regime, China represents an example of economic modernization based on the capitalist system, or as others say, through adopting the values of economic liberalization.

As observed in the last four decades, China has affiliated its economy with Western liberal values and one may argue that there are few countries which base their political ideology on communism, but have gained such significant economic modernization.

China is very unique in that it is already a globalized power leading the contemporary world economy. And there is almost a consensus upon the fact that China has been a sustaining power on the global stage in almost all aspects of economy, such as being a great investor and trading partner.

The country is always looking for ways to boost its capacities at the regional and global scale, taking into consideration all opportunities through its own multilateral institutions such as the Shanghai Cooperation Organization (SCO), and the Asian Infrastructure Investment Bank (AIIB). The latest examples of this policy can be seen in the very recent bilateral ties made with the Pacific region countries of the Solomon Islands and Kiribati.

Commencing from the 1970s, China has implicitly and explicitly decided to comply with the rules of the global capitalist economic model. As a testament to its success in this regard China was accepted as a member country of the World Trade Organization (WTO) in December, 2001.

But the problem as witnessed in official statements and in the media representing the Chinese government, China acts as a nation-state feeling itself under a constant threat, and wishes to aggressively sustain its economic development in a mood of revenge.

One may argue that this psychology is determined by historical factors. Hence, it is questionable as to whether it is reasonable or not, since this attitude causes an obsession in which China wishes to overtake everything that, in particular, the US has gained.

The second issue is related to whether China can build confidence for a healthy political environment which will contribute to regional and global peace. China has been increasing its military power in the Asia Pacific and recently built its first home-grown aircraft carrier which aims to withstand the navy power of the US. Although we cannot deny that Western capitalist states have failed in the creation of sustainable global peace, we can at least say that there are multiple approaches available to give space for distinct political and social forces in the West.

China is a relatively novel playmaker but has yet to gain the confidence of its neighboring countries and in the global stage. Some experts argue that China is a model country as its policies are being emulated by other countries. On the contrary, starting from neighboring countries such as member states of the Association of Southeast Asian Nations (ASEAN), China is perceived as a growing threat. The contested situation in the South China Sea is definitely a test for China on how to tackle issues with relevant countries in a way that builds more confidence.

The third issue is related to whether China will be able to convince the global community about its record on universally recognized issues from the environment to human rights.

Though China still abides by the measures taken in 2015 Paris Climate Agreement, the country has also been facing natural calamities and environmental problems owing to the aggressive developmental projects.

However, multiple rights issues are among the most crucial challenges for the Chinese government in front of the global community. Highly publicized cases of the repressive measures taken in autonomous regions such as Hong Kong, Xinjiang and Tibet, and the tight controls effecting the daily lives of the general public in mainland China, which were exposed in the 2019 World Report on Human Rights are reflections of the ideological stand of the state.

While China is celebrating the establishment of its state based on the Maoist version of communist ideology initiated seven decades ago, it has multiple issues to face in the domestic, regional and global spheres. But we should acknowledge that these issues are not merely China’s national problems, rather they are real threats targeting regional and global peace.