With their embargo against Trump, tech giants intervened more visibly than ever before in the political system of their own country. 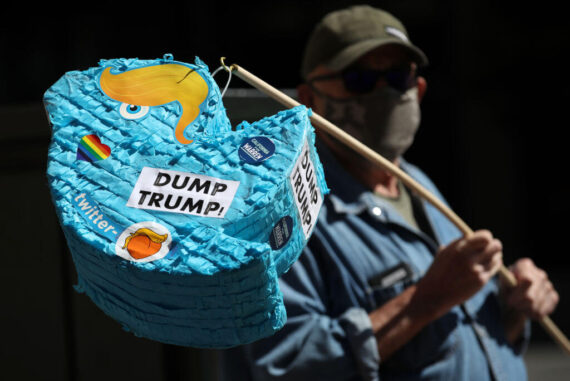 Activist Mike Merrigan holds a piñata shaped like the Twitter logo with hair to look like U.S. President Donald Trump during a protest outside of Twitter headquarters on May 28, 2020 in San Francisco, California. Photo by Justin Sullivan, Getty Images

Two events in early January illustrated the growing control of social media and other Internet companies over political discussions and systems. Starting on January 6, hours after supporters of former United States President Donald Trump stormed the Capitol building in Washington, D.C., a series of tech giants, beginning with Twitter, moved swiftly to block the president and his supporters from using their services.

Along with social networks like Facebook, Instagram, Pinterest, Snapchat, Reddit, and TikTok, media platforms including Spotify, Twitch, and YouTube, as well as marketing and financial services such as PayPal, Shopify, and Stripe, joined the near-complete embargo. Apple and Google banned Parler, a niche social network favored by the president’s supporters, from their online app stores before Amazon, which had hosted the service on its servers, removed it from the Internet altogether. Within a day, Trump found himself as silenced as effectively as the world’s most powerful man could possibly be.

On January 9, a number of Palestinian media companies and political organizations stopped posting on Facebook for two hours to protest the social media giant’s suspension of their colleagues’ accounts and deletion of their content. The gesture followed years of complaints about Facebook’s collusion with Israel and bias against Palestinians.

In September 2016, the company’s representatives met with Israeli Justice Minister Ayelet Shaked, notorious for her racist anti-Palestinian comments, and agreed to work together against “incitement.” Two weeks later, Facebook removed the accounts of a number of editors at the Palestinian Quds News Network, sparking angry protest outside Facebook’s New York City office and online. (In 2019, Twitter similarly deleted every account used by QNN without explanation or warning.)

Media organizations like ImpACT International for Human Rights Policies and Sada Social have documented hundreds of cases in which social media giants censored Palestinian users’ content, or simply deleted their accounts, including some with massive organizational reach, after they reported Israeli crimes against Palestinians.

Sada reported 1,200 such incidents in 2020 alone. In December, the group said that a number of Palestinian Facebook pages had experienced reductions in their traffic ranging from 50% to 80%.

In September, Facebook, YouTube, and Zoom each blocked access to a San Francisco State University featuring Leila Khaled, a political leader of the Popular Front for the Liberation of Palestine and veteran of its armed wing.

Zoom later blocked a number of events organized at various universities to protest its censorship. While these company’s suppression of Palestinian speech may have been nothing new, their obstruction of academic freedom at a public university in their home country certainly was, raising troubling questions about the role of private corporations in educational institutions that have, during the COVID-19 pandemic, largely become reliant on their services.

In 2018, after a failed attempt to assassinate Venezuelan President Nicolas Maduro with a weaponized drone, Facebook suspended the pages of news site Venezuelanalysis and regional broadcaster teleSUR, both broadly supportive of Maduro’s administration, before reinstating them.

In 2019, as the U.S. moved to restrict travel to Cuba, Twitter suspended the accounts of numerous Cuban journalists and government officials. And both Facebook and Twitter have attached labels to content by certain public news agencies, like RT and Press TV, indicating their governmental affiliations, a policy from which Western state media like VOA, PBS, NPR, and BBC seem curiously exempt.

With their embargo against Trump, tech giants intervened more visibly than ever before in the political system of their own country, acting as a cartel to shape not only public debates, but also governmental processes.

Like Facebook, YouTube, and Zoom’s earlier efforts Leila Khaled and her supporters, their actions showed a new willingness to pursue their own collective interests with blunt force, even at the cost of unprecedented, direct confrontations with public institutions.

Critics of social media censorship took several distinct approaches to Trump’s sudden disappearance from cyberspace. Some noted that as private companies, online services are not bound by the United States’ First Amendment or other legal protections of free speech, although as their critics were quick to observe, in an age when nearly all means of communication are controlled by corporate giants, such distinctions offer little comfort.

Others worried that the ban might encourage similar measures against figures and organizations with politics quite different from Trump’s, something that has already happened, but could escalate.

But the significance of corporations, accountable only to their shareholders, acting in concert to effectively control political discussions and outcomes has drawn considerably less attention, despite its obvious importance not only for the quality of contemporary dialogue, but the viability of democracy itself.

Also Read
Can You Hear Me Now? We Might Be Living in Echo Chambers on Social Media