The advance of fake news and information is not a new phenomenon but the media by which it is being exercised now is making it all the more effective and harmful. 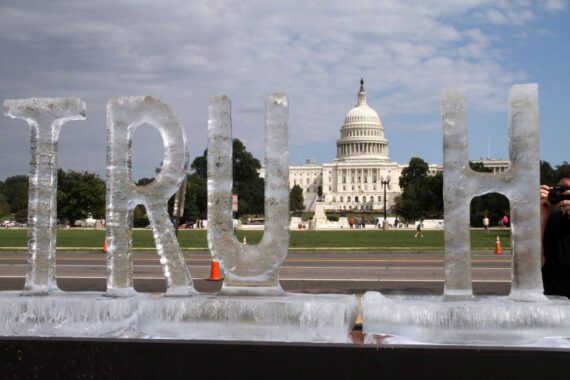 An ice sculpture is seen spelling out the word "truth" by artist duo Ligorano Reese, with the US Capitol in the background, in Washington, DC on September 22, 2018. Getty Images

Research shows that we are trusting beings. It also shows that unlike traditional media, new media does not follow the journalistic ethics and verification rules. If you put these together, you reach an understanding of the Goebbels Law of the Big Lie.

“If you tell a lie big enough and keep repeating it, people will eventually come to believe it.”

The fascistic mind behind this Law is problematic at best and catastrophic at the end, and the entire praxis is related to the state apparatus, yet the basic tenets in the contemporary forms of communication are the same. As Hitler’s Minister of Propaganda of Nazi Germany from 1933 to 1945, it is rather difficult to find a criminal mind as Goebbel’s to explain why and how the modern governmental and non-governmental organizations engage so arduously to deceive their or international societies of trusting human beings.

Paul Joseph Goebbels was one of Adolf Hitler’s closest and most devoted associates and was known for his skills in public speaking (and public deceiving). Hitler was the most preeminent and distinguished person who deceived not only his people but the world leaders as the U.S. presidents and UK prime ministers, U.S. and UK parliaments and most of the people in North and South America, Western Europe, Mid- and Far-Easts. Since modern communication and public-opinion leaders are not as forthcoming as that murderous Joseph Goebbels, we could be excused for looking into his theories when we need to learn and explain public-deceiving techniques.

Goebbels’ recommendation to Hitler was to use all the State power to repress dissent, “for the truth is the mortal enemy of the lie, and thus by extension, the truth is the greatest enemy of the State.” Please replace the word “State” with any name of a presidential administration or parliamentarian government which engages in deception.

How to shield a public, any public as small as the clientele of certain brand your company produces, or as large as the whole wide world, (“www”: get it?) from the truth? Herr Goebbels continues to teach behind the Hell fire:

“The most brilliant propagandist technique will yield no success unless one fundamental principle is borne in mind constantly – it must confine itself to a few points and repeat them over and over.”

So, Mr. Trump’s lies are confined to a handful of subjects and a close scrutiny shows us that he repeats them over and over again. Take for instance the claim that the U.S. taxpayers are footing the defense bill of Europe. Yes, the military expenditure of the U.S. government is much larger than any other country, and by extension it is spending more money for its military positioned in Europe. If the U.S. stops spending that money, then its military expenditure will not be exceeding others. Who needs the nuclear arsenal the U.S. positions and maintains in Europe? Europeans? Definitely not. Who benefits from the protective umbrella the U.S. Patriot air defense systems the U.S. governments made the EU purchase and sustain? The working-class people in yellow vests in France? Of course not.

Who needs the nuclear arsenal the U.S. positions and maintains in Europe? Europeans? Definitely not.

Why does President Macron crash the bones of protesters and poison them with his tear-gas? Goebbels and the Nazis thought of intellectualism as free thought, something that required the truth as its fuel, which, as we have quoted him above, is the mortal enemy of the governmental lie. Just like Macron, Trump wants everyone to be obedient to the government line; basically, they do not want people to think at all (A side note: Goebbels is also said to have suffered Narcissistic personality disorder (NPD), a pattern of abnormal behavior characterized by exaggerated feelings of self-importance, an excessive need for admiration, and a lack of understanding of others’ feelings).

It is not only Trump’s 10 thousand untrue things he said in office, but the false information and fake news stories people fabricate to suppress intellectual activities in the world (Some counts more, some less lies Mr. Trump had said. Nevertheless, even one false statement coming from the “leader of the free world” should be considered too much, in theory). Trump’s first contribution to the science of communication was no different than that of Goebbels. While he may not have exactly coined the word, he has popularized the term “fake news.” He may have been the first person using it as a proper noun for the famous dailies such as the New York Times and Washington Post. He calls them “fake news” whenever he has a keyboard attached to twitter or a microphone attacked to voice recorder. In addition to the prophesy of their remaining longevity (which is not very long), President Trump tried to reduce their circulations, too.

Just like Macron, Trump wants everyone to be obedient to the government line; basically, they do not want people to think at all.

As the pot calling the kettle black, Trump’s calling some media outlets “fake news promoters” only brings his lies and fabricated “facts” on the new media to mind. According to Media Matters for America (MMFA), a Web-based, non-profit research and information center dedicated to comprehensively monitoring, analyzing, and correcting” fake news, all the big American media outlets fail to rebut President Trump’s misinformation 65 percent of the time in their tweets about his false or misleading comments.”

Not only that, MMFA also calculated that major U.S. media outlets amplified Trump’s lies and disinformation over 400 times during the three-week study period, or 19 times per day, without identifying in the same moment that the information is “just total bullshit and shouldn’t be taken as truth.”  The major media outlets have passively misinformed the public by passing along misinformation from Trump administration, their study found. Here are some points from MMFA research:

Who lies on the Internet?

But not only the politicians and the traditional media lie on the Internet; the ordinary people, you and I also tend to lie on these platforms. According to the Psychology Today magazine, people directly lie about their lives to make themselves look more desirable or positive. In a study examining 80 online daters, Hancock, Toma, & Ellison found that two thirds of participants lied about their weight by 5 pounds or more. In a large sample of over 2000 people in England conducted by Custard.com, 43 percent of men admitted to making up facts about themselves and their lives that were not true online.

Trump’s first contribution to the science of communication was no different than that of Goebbels. While Trump may not have coined the word, he exactly has popularized the term “fake news.”

Why do you, I and Donald lie on the Internet? Because we know fellow humans are naturally social creatures—we crave relationships and social interaction. Before Hitler and Goebbels started abusing communication, Alfred Adler, world renowned philosopher and psychiatrist, informed us that our strong urge for social interaction and feeling a sense of belonging to a community push us to be a little like Trump: to fulfill our need for admiration. Yet Adlerian psychotherapy doesn’t treat everyone as natural liars of course. We do exaggerate a little. But to lie to the general public 10 thousand times in 24 months you or your loved ones have to have “something to gain or lose,” like some really good real estate in Jerusalem, West Bank of the Sharia River or on the Gazza Strip, where, like Manhattan, the land is not increasing but the people are!

In short, the advance of fake news and information is not a new phenomenon but the media by which it is being exercised now is making it all the more effective and harmful.

Joseph Goebbels once said, “Intellectual activity is a danger to the building of character.” Now, he would have been proud of himself.

Hakkı Öcal graduated from Ankara University, Faculty of Political Sciences. Öcal has earned master and doctoral degrees from Boğaziçi University. He continued with post-doctoral studies at the International Research Institute in Harvard University. Öcal, who was the general director of the publication in the interpreter’s newspaper, was awarded the Press Freedom Award by the International Press Institute. He has taught desktop publishing, visual design and web design courses at George Mason University and NOVA. Byte, PCWorld, and PCLife magazines published articles and computer programming language were the topics that he wrote about. He served as a rector consultant and faculty member of the Faculty of Communication at Bahçeşehir University. Now, he also serves as a rector consultant at Ibn Haldun University and is a faculty member in the Faculty of Communication.

Also Read
Can Tense Relations between Turkey and the US be Improved?