Hesitant behavior displayed by European countries with regard to the terror groups that target Turkey illustrates the fact that they can still take sides against Ankara and side with the YPG and the PKK during the Afrin operation. 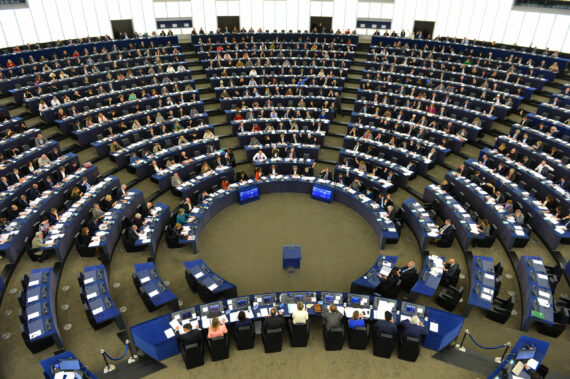 General view of the European Parliament is seen during a session in Strasbourg, France. Anadolu Agency

Relations between Turkey and Europe were already strained and policies adopted by several European countries in regards to the July 15 coup attempt led to more of a crisis between Ankara and the western bloc. Although European countries criticize Turkey on democracy, they did not openly side with democracy throughout the July 15 incidents, which gave the impression that they covertly supported the coup attempt. The bloc’s negative attitude towards the Justice and Development Party (AK Party) government, which was subjected to the coup attempt, continued throughout 2016. EU member states issued diatribes to the declaration of an emergency state and steps taken by the government to purge the putschist Gulenist Terror Group (FETO) operatives from public institutions. At the end of this tense period, the European Parliament called for the accession negotiations between Turkey and the European Union to be suspended on November 24, 2016. The tension Turkey had particularly with Germany, Austria and the Netherlands reached its peak when Turkish ministers were prevented from attending meetings scheduled in these countries as part of the April 16 referendum campaign.

Another development that hindered Ankara’s relations with Brussels was the anti-Turkey propaganda utilized by far-right parties as part of their national election campaigns in the Netherlands, Germany and Austria. Alarmed by the rise of far-right and xenophobic parties in these countries, center parties embraced the arguments of the far-right, employed anti-refugee and Islamophobic rhetoric in their election campaigns and vowed to adopt a harsher stance against Turkey so as not to lose their voter base. These states protected FETO operatives who pose a serious threat to Turkey’s national security and condoned the PKK, which led Ankara to issue severe criticisms to these countries. More, smear campaigns conducted against the Turkish President Recep Tayyip Erdogan in the European media were regarded as disrespect to the democratic will of the Turkish people, and was interpreted as another indication of the bloc’s attempt to interfere in Turkey’s domestic affairs.

Known as Germany’s “backyard” in the EU, both Austria and the Netherlands form a bloc together with Germany, which troubles Turkey-European Union relations.

The fact that Germany, which among European countries has the closest ties with Turkey, and Austria and the Netherlands, known as Germany’s “backyard” in the EU are the leading countries of the bloc that have troubled relations between the two parties, signifies that the main source of the problem is a struggle for influence.

Having a substantial population of Turkish descent and being Turkey’s largest trade partner, Germany has always tried to interfere with Ankara’s policies through various means. This has included supporting the PKK, or using the EU accession negotiations and the issue of economic aid as threats. Over the past years, Berlin began to lose the chance to interfere with Turkey’s domestic polity due to the AK Party’s pro-independence policies. Relations between the two countries reached a new low when Germany supported the July 15 coup attempt and opposed to the April 16 referendum. While the anti-Turkey left in Germany ran propaganda against the AK Party government, the far-right Alternative for Germany (AfD) slammed Chancellor Angela Merkel for the refugee agreement signed with Turkey. This led to the German government to adopt stricter policies against Ankara.

Turkey’s convergence with the United Kingdom, France and Italy

Alongside these problems confronted in relations between Turkey and Germany, the Ankara administration leaned towards other European actors with whom more rational relations could be established. In an attempt to diversify its foreign policy, the government took steps to liberate Turkey’s relations with Europe from the monopoly of the EU and Germany. In this scope, Turkey took a number of steps to improve relations with the United Kingdom, France, Italy, Spain and eastern European countries, especially in economic terms.

The main factors that played a role in helping to improve relations with the U.K. included Brexit, Donald Trump’s election as the U.S. President and the focus on economic cooperation in foreign policy. As Brexit is expected to cost a high price, London set off a quest to compensate this cost with alternative partnerships, and looked for a way to develop closer relations with Turkey within this framework. As Turkish Prime Minister Binali Yildirim expressed during the visit he paid to London to attend the Somali Conference held in May 2017, unlike other European countries, the U.K. displayed overt support to Turkey during the July 15 coup attempt. This nevertheless has been a factor that accelerated the convergence between Theresa May’s government and Ankara.

In an attempt to diversify its foreign policy, Ankara took steps to liberate Turkey’s relations with Europe from the monopoly of the EU and Germany and tried to improve relations with the United Kingdom, France, Italy, Spain and eastern European countries.

With the election of Trump, who utters unfavorable comments on the European allies of NATO and has adopted the slogan “America first,” the British government is aware that it can no longer rely on the U.S. administration – especially when in the midst of the Brexit process. Departing from the EU and keeping its distance from the U.S, in its search for new partners to balance its foreign policy, the U.K. made a rational choice by cooperating with Turkey. As for Ankara, cooperation with the U.K. is of major importance especially in the field of defense, since Turkey has recently had problems in purchasing military equipment from the U.S. and other European countries such as Germany and Austria.

During Theresa May’s visit to Turkey in January 2017, the British BAE Systems and Turkish Aerospace Industries, Inc. (TAI) signed an agreement as a first step towards co-producing fighter jets, which on the Turkish side reflected an improvement of relations with London while confronting other problems in the west. Within the agreement that is worth $125 million, BAE Systems agreed to offer service in designing and developing Turkey’s national TF-X fighter jet and to transfer technologies to Turkish engineers. The production of the first prototype of TF-X jets is set to be complete by 2023. A total of 250 jets are planned to be produced for $7 billion.

In addition to the U.K., Turkey signed other significant air defense agreements with France and Italy. During President Erdogan’s visit to France on January 5, 2018, an agreement for the co-production of SAMP-T air defense systems was signed between the French-Italian consortium Eurosam and Turkey’s Aselsan and Roketsan. With this agreement, Turkey made it clear that it does not intend to remain dependent on a single country in the field of defense, and that Ankara aims to diversify its security and foreign policies by procuring similar weapon systems from its European allies in addition to the S-400 air defense systems purchased from Russia. During the abovementioned visit, Turkish Airlines also signed an agreement to purchase a total of 25 Airbus A350-900 planes.

Anti-Turkey sentiments are dissolving in Europe

Having minimized problems with the U.K. and France due to partnerships in economy and defense, the Turkish administration has also endeavored to disperse anti-Turkey sentiments created in Europe by Germany and others by taking steps towards improving its relations with Italy, Spain and eastern European EU members. The opposition to the predominance of Germany in the EU by countries such as Italy, Poland and Hungary catalyzed Turkey’s developing ties with these countries. Member states who wish to decrease their dependency on Germany within the EU have not abstained from answering Ankara’s call for cooperation since they regard developing economic relations with Turkey as part of the steps to be taken in this respect.

To restore relations, Berlin needs to give up on regarding Ankara within its own domain of influence and must not allow the anti-Turkey left diaspora in Germany to monopolize the country’s policies on Turkey.

Taking considerable steps with regard to developing relations with European countries, Turkey has repeatedly underlined that it wishes to establish rational relations with Germany on the basis of mutual respect to each other’s sovereignty and cooperation in counter-terrorism. The latest friendly meetings between the foreign ministers of the two countries indicated that the tension between Ankara and Berlin might soon come to an end. In terms of its relations with Turkey, Germany does not wish to remain isolated in Europe with only a few allies such as Austria and the Netherlands. To that end, the country does not want to keep relations strained since other European countries are gradually improving their ties with Ankara. However, in order to restore relations, Berlin needs to give up on regarding Ankara within its own domain of influence and must not allow the anti-Turkey left diaspora in Germany to monopolize the country’s policies on Turkey.

Operation Olive Branch kicked off by Turkey against the PKK/YPG deployed in Afrin has been an important test for the European countries wishing to establish rational relations with Ankara. It must be underlined that the European countries that have not so far acted in solidarity with Ankara in its fight against terrorism have faced a serious quandary during Operation Olive Branch. On one hand they assume that the economic relations, which they seek to restore with Turkey, will be undermined if they adopt a policy in favor of the YPG and the PKK. On the other, governments are concerned that if they side with Ankara’s intervention, they will face the pressure of PKK lobbies in the media and political circles of their countries.

Hesitant behavior displayed by European countries with regard to the terror groups that target Turkey illustrates the fact that they still side with the YPG and the PKK during the Afrin operation.

If European states had supported Turkey during the operation, they would have had a chance to restore strained relations with Ankara due to their policies in the aftermath of the July 15 coup attempt. In this way, they could have also prevented the convergence between Turkey and Russia. Some people in Europe defend this view while others regard the Afrin operation as a new opportunity to attack and slam Turkey. Although the Turkish Armed Forces have taken all measures to prevent any harm to civilians, circles claiming that Turkey is violating human rights in the operation with the weapons provided by EU countries are trying to put pressure on European governments.

Despite all these pressures, statements issued by the British and Dutch foreign ministers explicitly underlined Turkey’s right to ensure self-defense and border security, which were read as covert support to Operation Olive Branch. Contrary to this, German and French officials criticized Turkey due to the pressures of PKK proponents and anti-Turkish lobbies in their countries. However, the criticisms issued are much more tepid than expected, which can be seen as an indication of their reluctance to escalate tensions with Turkey.

Nevertheless, hesitant behavior displayed by European countries with regard to the terror groups that target Turkey illustrates the fact that they can still take sides against Ankara and side with the YPG and the PKK during the Afrin operation.