A Lasting Peace in the Horn of Africa?

With its strategic position for international trade and African politics, the Horn of Africa will continue to remain on the radar of these regional and global actors. 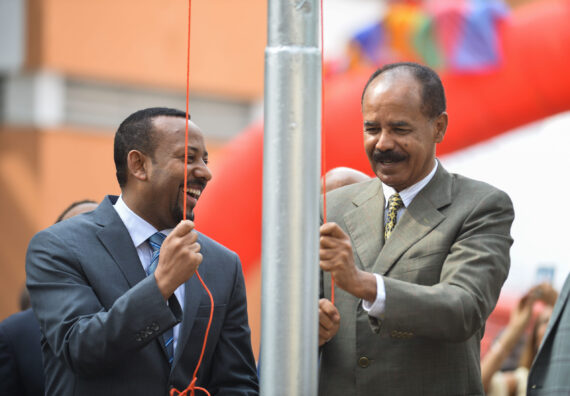 Ethiopian Prime Minister Abiy Ahmed (L) and Eritrean President Isaias Afwerki (R) celebrate the reopening of the Embassy of Eritrea in Ethiopia in Addis Ababa on July 16, 2018. - Eritrea's President Isaias Afwerki reopened his country's embassy in Ethiopia on July 16, the latest in a series of dizzying peace moves after two decades of war between the neighbours. Getty Images

During the last couple of months, the Horn of Africa has been witnessing landmark developments. As the most important actor in the region, Ethiopia has been making successful attempts to end the long-term regional conflicts. The leadership change in Ethiopia is the major dynamic that transformed Addis Ababa’s foreign policy behavior. The new Prime Minister, Abiy Ahmed, who took office last April, has been following a more active policy – both domestically and externally. Following his inauguration, Ahmed lifted the state of emergency, ordered the release of political prisoners, and called for exiled opposition figures to return to the country.

Ahmed has also pursued an active foreign policy agenda. Since April 2018, he has visited a number of countries, including Djibouti, Egypt, Sudan, Saudi Arabia, the United Arab Emirates, and the United States. This showed his interest in becoming a more influential country in regional and global politics. Abiy Ahmed’s priority in regional politics is to end the political conflicts in the Horn of Africa. Firstly, Ethiopia has resolved its decade long conflict with Eritrea. Ahmed’s efforts then focused on reconciliation between Djibouti and Eritrea, which have been hostile neighbors due to the border dispute.

Ethiopia and Eritrea fought a bloody war between 1998 and 2000. The war led to the death of at least 100,000 people and thousands of displaced citizens of both countries. The peace agreement signed at the end of the war was never fully enacted and the crisis continued until this year. Ethiopian Prime Minister Abiy Ahmed’s historic visit to Eritrea in July 2018 led to the end of the crisis. In the following period, relations between the two countries were normalized, and the two leaders signed a peace agreement in Saudi Arabia on September 16.

Ethiopia’s initiatives have also provided a solution for another long-standing crisis in the region. The conflict between Eritrea and Djibouti began in 2008 due to the border dispute, which caused the deaths of dozens of Djibouti soldiers. Throughout the years, the conflict between the two neighbors continued to deepen. The recent mediation efforts by Ethiopia and Saudi Arabia yielded results, and the leaders of Djibouti and Eritrea met in Jeddah on September 17, in a reconciliation meeting for the solution of the crisis.

A similar rapprochement in the region also took place between Somalia and Eritrea. The two countries had experienced hostility towards each other due to Eritrea’s support for militant groups in Somalia. These claims, however, gradually decreased. Following the efforts of Ethiopia, and support of the international community, Somalian President Mohamed Abdullahi Mohamed visited the Eritrean capital Asmara on July 30, 2018, and paved the way for reconciliation between the two countries. Both leaders agreed to re-establish diplomatic relations. In early September, the leaders of Ethiopia, Eritrea, and Somalia came together in Asmara and took important steps in deepening cooperation between countries in the region.

The main actor of the current developments in the Horn of Africa is obviously Ethiopia. Addis Ababa aims to become a new power base in regional politics. The country has been in competition for leadership with regional actors, particularly with Egypt. A recent example of this on-going competition is the tensions that arose over Ethiopia’s dam project, which is being built on the river Nile. With its proactive foreign policy, Ethiopia also aims to gain the support of other important regional actors such as Sudan, Somalia, Kenya, Eritrea, and Djibouti.

It is thus clear that the Horn of Africa has been witnessing rapid political transformation in the recent period. It can be stated that the driving actors of this transformation are regional governments, particularly Ethiopia. However, global actors such as the U.S., China, and Gulf countries such as Saudi Arabia and the United Arab Emirates, are very interested in the transformation process in the region. On the other hand, while having great interest in the Horn of Africa region, Turkey and Qatar have followed a relatively calm attitude vis-à-vis the current developments in the region. Both countries have been focusing on their domestic issues and paying less attention to developments in the Horn of Africa. Having said that, with its strategic position for international trade and African politics, the Horn of Africa will continue to remain on the radar of these regional and global actors.