So far Premier Abiy Ahmed has a good track-record. But the challenges his administration face are deep-rooted. 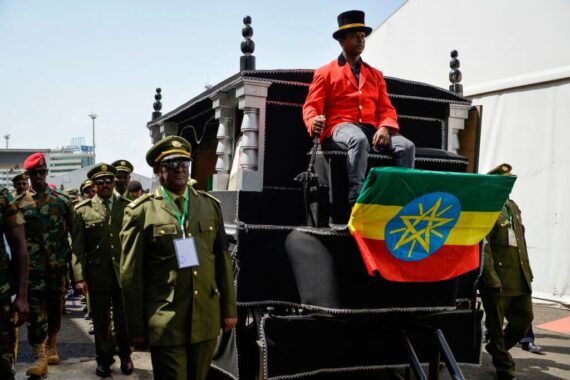 Members of the army and religious leader take part in a funeral parade transporting the coffins of Chief of Staff of the Ethiopian defence forces Seare Mekonnen and of Major-General Geza'e Abera, a retired former senior official in the Ethiopian army, to the millennium hole in Addis Ababa, on June 25, 2019 ahead of their National funeral service. Getty Images

On Saturday 22 June, fear and anxiety griped Ethiopia – a nation already on uncertain political transition. A coup bid was underway in Bahir Dar, the capital of the northern Amhara regional state. Reports emerged that General Asamnew Tsige, chief of security of the Amhara region, busted into a board meeting of the regional government with coup plotters – mostly members of Amhara region’s paramilitary officers. In the incident, Dr. Ambachew Mekonnen, the regional president of Amhara and Atto Ezez Wase, a senior political advisor were murdered on the spot. The Attorney general of the regional state who was present was also wounded.

Meanwhile in Addis Ababa, the nation’s capital, the coup plotters were present and carried a string of assassinations targeting senior military officials: General Seare Mekonnen, the chief of Ethiopia’s defence forces and Major General (Rtd) Gezai Abera were murdered in their residents – by their body guards. The two incidents in Bahir Dar and Addis Ababa were coordinated and well-planned. Despite targeted killings of its top leadership with the aim to sabotage the chain of command, the Ethiopian army reacted swiftly: the coup leader was killed in Bahir Dar and many coup plotters were arrested. The African nation had survived a cataclysmic and potentially ruinous moment.

However, Ethiopia is not out of the bushes yet. The Prime Minister, Dr. Abiy Ahmed Ali, was himself targeted last year in a bomb blast in Addis Ababa. Since Dr. Abiy Ahmed came to power Ethiopia witnessed both bright and dark gloomy days. He initiated political and social reforms that have won him praises both at home and globally. Ethiopia is on the right course. Nonetheless, the transition to democracy and liberty has unleashed out rancid ethno-nationalism and violence on a large scale – Ethiopia has the highest Internally Displaced Persons (IDPs) globally, 2 Million citizens to be precise. And the recent coup d’ etat attempt has risen the political temperature of the nation.

Reforms in Ethipoia have to be ‘fast and furious’ – and so far they have been.

So far Premier Abiy Ahmed has a good track-record. But the challenges his administration face are deep-rooted. Ethiopia has a brutal history: Centuries of imperialism; followed by the genocidal Marxist-Leninist Derg regime; and then came the equally genocidal and totalitarian Ethiopian Peoples’ Democratic Revolutionary Front (EPDRF). Violence and brutalities have been rendered the social and political ethos of this nation that has more than 100 different ethnic groups and languages. Unfortunately, today Ethiopia is brimming with internal xenophobia, ethnic tensions and contempt, and a dangerous zero-sum political posturing among its different ethnic political classes.

The reforms initiated by Abiy Ahmed since coming to power in April 2018 have been cathartic and promising. Political prisoners and journalists languishing in prisons were all released. Reconciliatory talks were initiated with secessionist rebel groups and factions – most prominently with the Oromo Liberation Front (OLF) and the Somali Ogaden National Liberation Front (OLNF). Bones were also strengthened with arch-nemesis Eritrea. Freedom of speech and publication were celebrated by the government – a new trend in Ethiopia. Conversely, amid all these neck-breaking reformations Ethiopia was descending into an internal ethnic psychosis. The Somali and Oromo regional states were the epicentres, and most recently Amhara and Benishangul-Gumuz regional states.

Ethno-nationalism and the inevitability of decentralization

Centuries of a statist and centralised governance model are at the root of Ethiopia’s ethnic tensions and trepidations. Memories of state violence and brutalities coupled with perceived (and real) ethnic autocracies punctuate the tapestry that is Ethiopia’s national memory and consciousness. Interestingly, the ethnic based autonomy governance structure – that is now in place – instituted by the EPDRF since 1993 seems not to help at all. And when anti-government protests began in Oromo and Amhara regions in 2015, many regional analysts anticipated that it was a matter of time that Ethiopia takes the path of Yugoslavia and disintegrate along Ethnic lines.

Abiy Ahmed’s reign is characterised by his medemer philosophy: a loose meaning of unity, peace and coming-together in Amharic. But, so far, anything has happened but medemer. Ethnic violence has engulfed the Somali and Oromo states in 2018, Amhara, Benishangul-Gumuz and Southern Nations, Nationalities and Peoples’ State (SNNP) in the last three months. The Prime Minister himself was targeted. The president of the Somali State, Abdi Mohamoud Omar, a war criminal himself, was deposed by the Ethiopian Army from his post (and this was perceived as the beginning of a new ethnic hegemony by Abiy Ahmed’s Oromos). Bloody Saturday (June 22) and the subsequent coup d’ etat attempt will exacerbate the reforms initiated by Abiy Ahmed since April 2018; they are an unfortunate precedent in the new Ethiopia envisaged by medemer.

While the reforms initiated by Abiy Ahmed have been cathartic and promising, his administration faces problems deeply rooted in Ethiopia’s governance.

2020 is an election year in Ethiopia: The first general election after Premier Abiy Ahmed’s political and human rights reforms. This election will be a litmus test of the EPDRF’s – the ruling party that is chaired by the Premier – resolve and commitment to democratic transition with free and fair elections, where different parties contest on a levelled political arena. Next year will be a defining year in Ethiopia’s future. Opposition parties are coalescing around political alliances and offer an alternative vision for the nation alongside the ruling EPDRF.

Reforms have to be ‘fast and furious’ – and so far they have been. Discourse and debates on the most effective and relevant administrative model is raging throughout the nation and among the intellectual and political elites. A statist and centralist model is detrimental for Ethiopia, and it is not feasible at this juncture – when different ethnic groups have tasted autonomy from Addis Ababa. A viable Ethiopian state will only flourish in a federated and autonomous Ethiopia. Centralization of power will only increase ethnic anxiety and tension that can loosen the nation’s social fabric. Centralization, which was argued for by the coup plotters, has dark connotations: Imperialism, assimilation policies, land grab and Amhara supremacy.

Diversity as a panacea

Ethiopia is a nation of different nationalities, peoples and ethnic groups all encapsulated in what was once the Christian Ethiopian empire. Today, the nation has a massive population of 105 Million and more than 100 languages. It is diverse and beautiful. Its 40% Muslim population – a whole population that is historically marginalized and suppressed – feel invigorated under the reforms initiated by Abiy Ahmed. Reforms in this transition period have to be painstaking and conscientious. Ethnic supremacists, chauvinistic nationalism and extremists will be a challenge in the transition period – and this was all-over the coup plotters.

After  decades of violence, brutalities and totalitarian regimes Ethiopia needs reconciliation on a national scale.

After  decades of violence, brutalities and totalitarian regimes Ethiopia needs reconciliation on a national scale. Premier Abiy Ahmed Ali has the backing and the goodwill of the majority of Ethiopians, and he has to deliver amid these challenges and quandaries that the nation faces. Reforming and strengthening the existing autonomous administrative structure is indispensible – the Tigray and Somali regional state parliaments are already ruminating secession in case a centralist way is ventured by the EPDRF. Rule of law, free and fair elections, respect for human rights and dignity and the Philosophy of Medemer will only salvage Ethiopia. Challenges, uncertainties and sabotages in this transition period will be inevitable. And Abiy Ahmed has the political and strategic acumen to deliver Ethiopians into the land of Canaan – of peace, stability, democracy and prosperity.

Also Read
The United Kingdom and Denmark intend to Relocate Refugees to Rwanda
We use cookies to optimize your online user experience. To learn about our use of cookies and how you can manage your cookie settings, please see our Privacy Policy. By continuing to use our site you are excepting our use of cookies.Accept Cookies & CloseMore Info