A Revolution Undone: What’s Next for Sudan’s Uprising?

Sudan can be the first country in Africa to achieve democratic governance through peaceful revolutionary regime change. If not, the country will continue to suffer deepening instability and be increasingly distanced from the initial goals of the revolution. 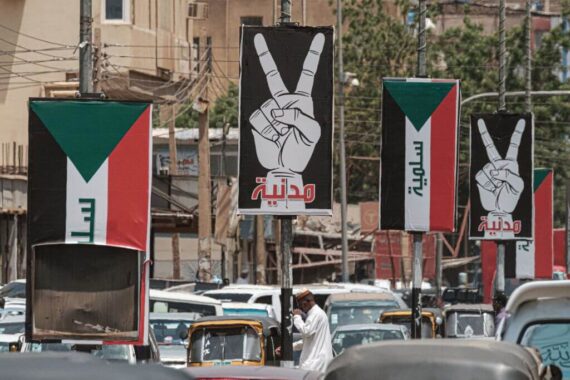 This picture taken on June 15, 2019 shows placards showing the victory gesture with the Arabic word "civilian" and others of the Sudanese flag with the word "peaceful" along a street in the Sudanese capital Khartoum. Getty Images

The revolutionary uprising in Sudan has recently been under attack by regional counter-revolutionary forces that aim to hijack the democratic aspirations of the Sudanese people. The bloody raid carried out by the security forces against the protestors that gathered around the army headquarters on June 3, 2019 has been the most serious attempt to put an end to the revolutionary uprising. At least 108 people were killed and hundreds more were injured during the evacuation of the square, which coincided with the last days of Ramadan.

The attack on protestors in Khartoum is very much similar to the unfortunate experience that Egyptian revolutionaries were subjected during their army’s bloody attack on Rabaa Adawiya Square on August 14, 2013. During those events, the Egyptian army led by Abdel Fattah Al-Sisi, who is now the president of the country, killed over a thousand peaceful civilian protestors. As the massacre in Rabaa Square was a turning point for the revolution in Egypt, the attack on protestors in Sudan can be thought of as a similar case. With the dispersal of the square, the Sudanese Transitional Military Council aimed to end the demonstrations completely. However, it can be observed that the Council will face difficulties in reaching this objective.

Military actors in Sudan have been receiving support from various regional countries, similar to Egypt, particularly from those in the Gulf region, such as Saudi Arabia and the UAE.

What is striking about Sudan’s revolutionary uprising is the involvement of external actors. Similar to the experience in Egypt, military actors in Sudan have been receiving support from various regional countries, particularly from those in the Gulf region, such as Saudi Arabia and the United Arab Emirates. Since the start of the Arab revolutions in 2011, Riyadh and Abu Dhabi have worked hard for the failure of the revolutionary process and have been directly involved in political processes in Egypt, Yemen and Libya. Both countries also cooperated with the Transitional Military Council in order to undermine the revolutionary process in Sudan. During the last week of May, the President of the Sudanese Transitional Military Council, Abdel Fattah Burhan, met with UAE Crown Prince Mohammed bin Zayed, Saudi Crown Prince Mohammed bin Salman, and Egyptian President Abdelfattah El-Sisi. The protestors strongly criticized the contacts of the Military Transition Council and stated that external intervention in the Sudanese revolution was unacceptable.

Despite support from regional countries, international actors heavily criticized the Sudanese army for its treatment of the revolutionary uprising. The violent intervention on a protest sit-in was condemned by international organizations. The General Secretary of the United Nations, Antonio Guterres, released a strong statement condemning the violent attack on civilian demonstrators by the Sudanese military. The African Union announced that Sudan’s membership is temporarily frozen and called for immediate civilian rule in the country.

More, despite the violent attacks by security forces, protestors are still determined to continue their revolutionary uprising. Particularly the youth, who constitute 75% of the country’s population, continue to demand a civil and democratic government that represents the will of the people and that will work for the prosperity of the country. The revolutionaries also demand the removal of the military from politics, whom they accuse as being the main cause of instability in the country.

Despite the violent attacks by security forces, Sudanese protestors are determined to continue their revolutionary uprising. Particularly the youth, who constitute 75% of the population, demand a civil & democratic government.

As announced earlier, the revolutionary movements started fresh demonstrations following Ramadan and organized civil disobedience actions against the rule of the Transitional Military Council (TMC). Earlier this week, the Sudanese Professionals Association called on the people to engage in civil disobedience actions throughout the country. In support of revolutionary calls, people from different occupations, such as journalists, teachers, engineers, veterinarians, pilots, drivers, and pharmacists stopped working. On June 10 in Khartoum, protestors kept their shops closed, closed main roads and organized small-scale demonstrations. It has been reported that 4 people were killed and a number of opposition figures have been detained. Some protest leaders were deported by the Transitional Military Council and taken to other countries via the intelligence unit.

Protestors accuse the Sudanese Transitional Military Council for lacking legitimacy and criticize the military leadership for its unjust treatment of revolutionary protests. It can be said that with its actions, the council is pushing the country towards further instability and chaos. The fact that regional actors such as Saudi Arabia and the UAE have also been supporting the Military Council in order to hinder the revolutionary process, as was also the case in Egypt, has also been criticized. Sudanese revolutionaries refuse the establishment of a repressive regime and instead demand a democratic country.

It is therefore vital that both the military and civilian forces in Sudan come together and agree on the establishment of a democratic and civilian administration in the country in order to ensure long-lasting stability and peace. By successfully completing the revolutionary process, Sudan would be the first country in Africa to achieve democratic governance through peaceful revolutionary regime change. Otherwise, the country will continue to suffer deepening instability and be increasingly distanced from the initial goals of the revolution.