A Turning Point for the Media

All in all, why the western media organs do not want democracy for Turkey while they defend democracy for themselves will remain an enduring question. 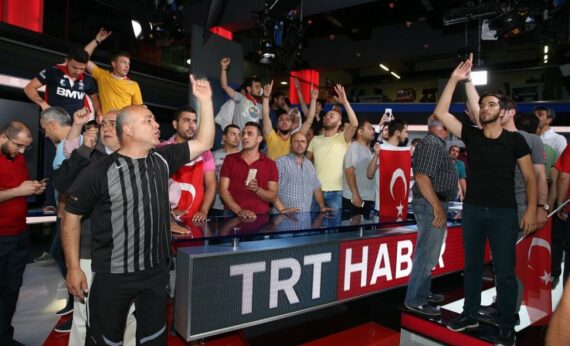 The Turkish media played a critical role in the abortion of the coup attempt on the evening of July 15, 2016. This is, in fact, clearly seen in the Whatsapp messages of the plotters who emphasized over and over again that public media broadcasts must be cut off.

SecurityBy Mustafa Caner
To this end, they took over the state-run TV (TRT) and forced the anchorwoman to read the coup declaration. However, it is not possible to achieve a coup d’état merely by taking over a state media organ in this age of technology. At this point, the attitudes of other media institutions became important. In fact, the Turkish media did not obey the plotters’ order to “broadcast the coup declaration on other TVs as well.”To the contrary of this so-called order, other Turkish media organs, in live broadcasts, interviewed Prime Minister Binali Yıldırım and then President Recep Tayyip Erdoğan, and conveyed their messages to the People of Turkey. From CNN Turk to NTV, from A Haber to Ulusal Kanal and TVNET to TRT, the media in Turkey stood against the coup. The plotters barged into TRT and CNN Turk, and a possible raid to A Haber was averted by citizens of Turkey who were trying to guard the building against the coup-plotters. Police fought off the plotters’ attack on TURKSAT (state-run communication satellites), foiling their attempt to take control of all broadcasts.President Erdoğan’s messages on live broadcast, and reruns of his messages, played a tremendous role in raising national willpower and bringing the Turkish people to the streets to stop the tanks driven by the putschers. The Turkish media took sides with the government and the people, not the coup-plotters; therefore, they prevented the atmosphere of fear and panic from spreading, and contributed to the abortion of the coup attempt.This marks a milestone for the Turkish media. In the history of Turkish politics, the mainstream media had mostly supported coup plotters – from the May 27, 1960 military coup to the September 12, 1980 military coup, and from the February 28, 1997 post-modern coup to the April 27, 2007 military memorandum. Generally, the media has acted as their mouthpiece and broadcast accordingly. However, on July 15, 2016 – the date of the failed coup attempt by FETO (Fetullah Gülen Terror Organization) – the Turkish media set an excellent example of the power of journalism to oppose the perpetrators, and sided with democracy and freedom. Therefore, the media in Turkey has experienced a turning point in its history. Unfortunately, however, it is impossible to say the same for the international media.

The U.S. and British Media Back the Coup Plotters

International media, the U.S. and the British media in particular, lamented the failure of the coup attempt in Turkey. CNN, The New York Times, Fox News, The Independent, BBC, The Financial Times, the Washington Post and the Times were full of news stories in favor of the coup attempters rather than criticisms about the attempted coup.

The headlines in the aforementioned newspapers and TVs leaned heavily towards the perpetrators’ side, with comments such as “The Coup would have been better for Turkish democracy,” “People behind Erdoğan are like sheep,” “These must have been done for a successful coup,” “Fight against DAESH will be negatively affected,” “Erdoğan deserved the coup,” and “Authoritarian tendencies will increase in Turkey.”

The approach of the western media favored the failed coup, considering these news bites and assessments, which belittle the People of Turkey who resisted the coup attempt. A similar reaction, yet in a different tone, came from western politicians as well.

All in all, why the western media organs do not want democracy for Turkey while they defend democracy for themselves will remain an enduring question. For now, this question will remain unanswered and related discussions will continue. However, the Turkish media and the western media have approached the failed coup, attempted by the disciples of Fetullah Gülen in the military, from opposite sides; and that, in fact, affirms criticisms that the FETO (Fetullah Gülen Terror Organization) is “a network guided by the global powers.”