A Uni-Multipolar Moment in Turkish Politics

The Turkish political system is not unipolar, in which a single party acts unilaterally, but has a dominant power whose influence is possible through cooperation with other parties or power blocs. 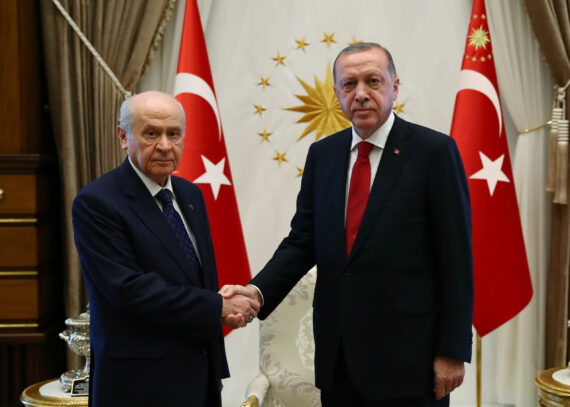 Turkish President Recep Tayyip Erdogan (R) shakes hands with Turkish Nationalist Movement Party's (MHP) Leader Devlet Bahceli (L) as they pose for a photo ahead of their meeting at the Presidential Complex in Ankara, Turkey on June 27, 2018. Anadolu Agency

If further proof regarding the orientalist framing of Turkey’s June 24 presidential and parliamentary elections were needed, the interpretations in the Western media from Washington to Berlin would provide it. Rather than understanding how the election and transition process to the new political system transforms Turkish domestic politics towards a more multipolar direction, they seek to fixate Turkey with extraordinary conceptualizations, each of them displaying their own trajectories.

Hyper-nationalism, ultra-nationalism, religious-nationalism, dictatorship, one-person rule and Islamo-fascism constitute some of the concepts that the Turkey watchers in the West chose in analyzing the result of the June 24 election. This is not new. Since 2013, Turkey has been a central phenomenon in the Western world. The new Turkish politics, however, is heading towards a different direction, which will strengthen Turkish politics and democracy. This newly emerging structure of Turkish politics will pose more significant challenges for the AK Party.

During the 1990s, Turkey had a multipolar domestic political landscape with many political parties. Each party dominated different segments of the political sociology of Turkey and competed to shape Turkish political life. Rivalry among them was inherent in the political atmosphere and was enhanced by competition and ideology spread in various segments of politics. The multipolar political system did not necessarily display a democratic approach. It was unipolar in terms of the extraordinary power status of the Turkish military over the political sphere.

A multipolar political system, in contrast, has several parties, which compete with each other but need engagement against each other in order to resolve internal issues and maintain the coalition to win the elections. The Turkish model of allying with politics proved these kinds of attempts in the pre-AK Party era many times.

Current Turkish politics emerged and probably will continue after the June 24 election, following the establishment of the new executive presidential system that does not fit either of these models. Instead, it is similar to what Huntington labeled in his most-cited article to understand the structure of international politics in the post-Cold War world; the emerging Turkish political landscape is a mixture of one political party, which is no longer hegemonic to consolidate power unilaterally. Turkish politics in the post-June 24 presidential election might be called, as Huntington describes in defining international politics regarding polarity, a uni-multipolar political system. A uni-multipolar political system in the Turkish context has one dominant power that is unable to dominate the entire political discourse.

This means two things for the future of Turkish politics. First, concerning the first round of the presidential election, the most powerful candidate needs at least one party’s support from the right wing of the Turkish political spectrum. If the candidate cannot win the presidential election in the first round, there is no given victory for the right wing in the second round. More importantly, there is no granted majority in the parliament for the dominant party – as the last election result demonstrated. Secondly, the single hegemonic party–as in the case of Turkey; the AK Party– can maintain its power and resolve key issues only in cooperation with some of the other minor parties.

In this uni-multipolar new Turkish political landscape, the domestic power structure has three different levels and political blocks. At the top, the AK Party, consolidating its power via conservatism, democratic nationalism and an Islamic friendly approach, has preeminence in every domain of influence. As the last election underlines, the MHP is part of the collective political values. On the second level, the CHP is positioned as the principal opposition party, that is the dominant or challenger actors in the coastal areas of Turkey’s west but with its accumulation and mobilization influence and capabilities do not expand to the entire country as compared to the AK Party. The CHP articulates its mobilization around secularism, secular-nationalism, Westernism, and populism. On the third level, there comes the nationalist Kurdish party, HDP, whose influence in the southeastern part of Turkey is no less than the AK Party. Following the emergence of the Iyi Party, as the potential representative of hybrid-nationalism and the new right in Turkey, holding around 10 percent of the votes, there is still a probability of the establishment of a fourth level.

The uni-multipolar structure of new Turkish politics with the establishment of the presidential system generates its own different patterns of competition. Under the condition of uni-multipolarity, counterbalancing the dominant party is very difficult, as the AK Party continues to strengthen its power and to maintain its alliance with the MHP – the nationalist party. There are also other minor parties that want to bandwagon with the AK Party for their own profit. The AK Party’s unique relationship with the MHP will be providing leverage against the alternative power block, but ultimately will be consolidating MHP’s power capacity, which can transform ad hoc the alliance between the two parties as their modus operandi for the next elections.

The Turkish political system is not unipolar, in which a single party acts unilaterally, but has a dominant power whose influence is possible through cooperation with other parties or power blocks. The AK Party’s primacy in the domestic distribution of power capabilities is one of the most salient features of the current Turkish politics, but the new dynamics with regards to the new system requires more cooperation to sustain its supremacy.