After Raids against Turkish Forces, a New Approach is Needed for Idlib

Assuming that no miracle will happen soon, the Turkish authorities need a new approach for Idlib. This should start with reaching an evacuation deal and securing the safety of trapped soldiers in Morek. 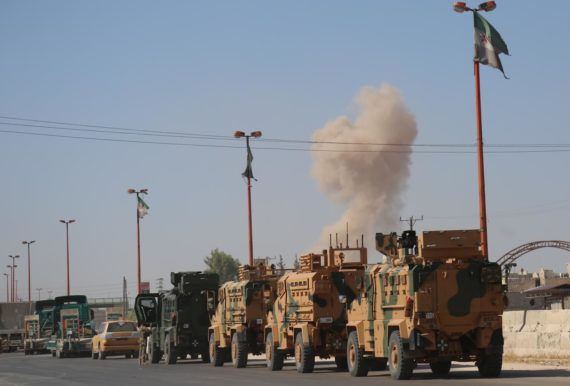 Turkish military convoy is seen on August 19, 2019 in Syria's northern province of Idlib. Syrian regime launches airstrikes on Maarat Al-Numan town as a convoy of Turkish military vehicles passes through the town. AA

In my previous column on the fate of the Turkish observation point in Morek I argued  that Turkey had four options to prevent its soldiers from a siege by the Assad regime: Withdrawing, preventing, escalating or postponing. On August 19, Turkey did not utilize any of these options, and the supply route to the observation point in Morek was cut off. A last-minute attempt by the Turkish Armed Forces to send in a convoy failed as regime attacks prevented the convoy from reaching Khan Sheikhoun.

Assuming that no miracle will happen soon, the Turkish authorities need a new approach for Idlib. This should start with reaching an evacuation deal and securing the safety of trapped soldiers in Morek. Otherwise, if the Turkish soldiers aren’t evacuated, a terrible fate might come true. It is not known what the regime and its militias will do, nor is it guaranteed that Russia can prevent the regime or its militias from unilateral actions against Turkish soldiers. At this stage, there are still options for Turkey in Idlib to form a new approach.

In the morning of August 19, the Turkish Armed Forces sent in a huge convoy of tanks and armored vehicles towards Khan Sheikhoun. The aim was to establish a base in the strategic town located on the M5 highway in order to secure the supply route towards the observation point in Morek. When the convoy came close to Khan Sheikhoun, a strike landed in front of the convoy and stopped it from moving further. Minutes afterwards, a second strike hit the rear of the convoy hitting Syrian opposition fighters escorting the Turkish convoy. Five hours later the Turkish Defence Ministry condemned the incident. However, when the convoy attempted to move forward again, the road was hit by another strike and the convoy stopped again. After failing to prevent this besiegement from occurring, the Turkish side have not risked escalation as well. No retaliation or any other kind of escalation towards the Assad regime has happened. Furthermore, a deal with Russia to postpone any actions towards the Turkish forces seemingly did not happen.

In order to not risk the lives of the Turkish soldiers, Turkey needs to evacuate or withdraw its soldiers starting with the one in Morek.

Since then, the Turkish convoy remains in the open area and waits. In the meantime, the Assad regime managed to capture the Al Nimr checkpoint and cut the M5 highway to Khan Sheikhoun and Morek. During the night, the regime started an operation into Khan Sheikhoun with their new night vision equipment supplied by Russia and managed to capture parts of the city by dawn. With the inevitable loss of Khan Sheikhoun, the Syrian opposition mostly evacuated from the pocket in northern Hama, but the Turkish soldiers in Morek stayed. This made the last option of withdrawing obsolete and the worst-case scenario of a siege against Turkish soldiers in the observation point in Morek happened.

After this development, the Turkish observation points in Idlib became pointless and the Assad regime and Russia may do the same with the other eleven observation points as well. In order to not risk the lives of the Turkish soldiers, Turkey needs to evacuate or withdraw its soldiers starting with the one in Morek. Such a move would also open the way for a humanitarian disaster in Idlib in which 3.5 million civilians would be targeted by the Assad regime. According to different estimates, one to two million Syrians may attempt to cross into Turkey as refugees. As such a scenario is unacceptable, Turkey needs to find a way to prevent this from happening. Safeguarding the rebels in Idlib by granting a special protection or a different mechanism like a security belt along the border might help in this regard. Nevertheless, the option of escalating always remains but risking a war against the Assad regime and Russia seems very unlikely under current circumstances.