The Amnesty International’s recent report on apartheid in Israel comes on the heels of similar analyses by Human Rights Watch and by the Israeli rights organization B’tselem. 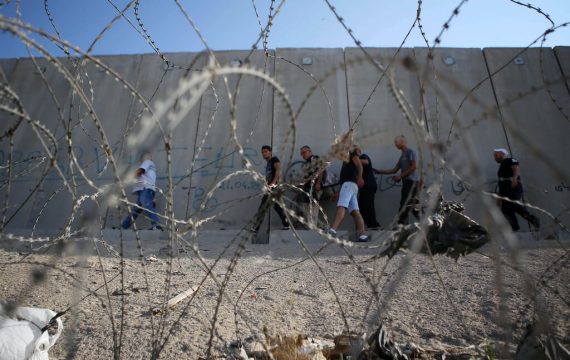 Palestinians cross into Jerusalem through the Kalandia border crossing which divides the city from Ramallah in West Bank. Photo by Shadi Hatem, Anadolu Images

Amnesty International’s February 1 report on apartheid in Israel puts the spotlight on Israel’s character as a state. The report comes at a crucial juncture in international scrutiny of Israel for its original takeover of Palestine’s territory, its expulsion of Arab population, and its erection of a discriminatory legal order.

Coming on the heels of similar analyses by Human Rights Watch and by the Israeli rights organization B’tselem, the Amnesty International report does not simply point to violations of various human rights. Instead, it focuses on the totality of violations to show Israel to be a criminal enterprise. That orientation is reflected in the report’s title, “Israel’s apartheid against Palestinians: a cruel system of domination and a crime against humanity.”

The point of all three reports is that the aim of Israel’s government is unlawful domination of the Arab population. B’tselem was the first, with its January 2021 report “A regime of Jewish supremacy from the Jordan River to the Mediterranean Sea: This is apartheid.” Amnesty International followed in April 2021 with a report headed “A Threshold Crossed: Israeli Authorities and the Crimes of Apartheid and Persecution.”

The Amnesty International report has been condemned by Israel’s government, which denies the report’s characterization of the country. The report was labeled as “false, biased and anti-Semitic” by Israel’s Foreign Minister Yair Lapid.

The vehemence of this retort can be explained by the fact that the conclusion reached by the three human rights organizations may have serious consequences for Israel. Apartheid is a crime for which perpetrators may be prosecuted and jailed. The timing of the Amnesty International report is important, coming after the hostilities between Israel and Gaza of May 2021.

The Human Rights Council is leaving it up to the commission of inquiry to ascertain just what those “root causes” were. It is asking the commission not only to collect data but to identify individual perpetrators. The commission is tasked to prepare criminal dossiers on persons who might be subject to being indicted. Apartheid is a crime that falls under the broader crime category “crimes against humanity,” prosecutable in the International Criminal Court.

Importantly, the International Criminal Court’s Prosecutor is currently investigating international crimes in Israel and the occupied Palestinian territories. To date, the Prosecutor has not inquired into apartheid, but the three reports give him a solid basis to orient his investigation in that direction.

The three reports provide an opening for Palestine advocacy organizations, in particular because of the formation of the commission of inquiry. Palestine advocacy organizations can propose to the commission of inquiry a variety of Israeli policies as “root causes” of the 2021 Gaza-Israel conflict. Perhaps the most important one is Israel’s refusal to offer repatriation to the Arab families expelled from their home areas in Palestine in 1948. Given that the majority of Gaza’s inhabitants are from families that were expelled in 1948, the refusal to allow repatriation qualifies as a “root cause” of the May 2021 hostilities.

Ever since 1948, the United Nations has called on Israel to repatriate persons displaced in that year. However, no concrete action has been taken by the international community to force Israel to comply. Now for the first time an international procedure has opened whereby Israeli officials responsible for Israel’s policy of denying repatriation can be brought to account. The commission of inquiry will be cooperating with the International Criminal Court, preparing criminal dossiers that the Court’s Prosecutor can use to prepare indictments.

Apart from whether any actual indictments are ever issued by the International Criminal Court for denial of repatriation, advocacy efforts in that direction hold the prospect of changing the discourse around the 1948 Nakba and the entire Palestine issue. Repatriation will come to be seen not simply as an agenda item for Israeli-Palestinian negotiations. Instead, the Israeli officials who refuse to repatriate will be seen as criminals.

The commission of inquiry is made up of three members, who have already been appointed. All three are seasoned human rights advocates. All three are well schooled in the history behind the establishment of Israel. The three human rights organizations in their reports have provided solid factual information that is now available to the commission. What could be particularly compelling for the commission is submissions from Palestinians who are from families that were forced out of their home areas in 1948.

John Quigley is Professor Emeritus at the Ohio State University. He is author of “The Legality of a Jewish State: A Century of Debate over Rights in Palestine,” recently published by Cambridge University Press.