Palestinians have been experiencing apartheid for the last 73 years and the world finally started to hear about it. 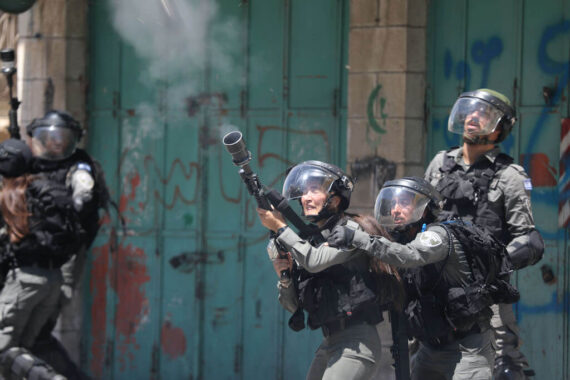 Palestinian demonstrators burn tyres and throw rocks in response to Israeli forces' intervention during a protest against Israeli forces' attacks over East Jerusalem and Gaza, on May 14, 2021, in Hebron, West Bank. Photo by Mamoun Wazwaz. Anadolu Agency.

The recently released report by Human Rights Watch (HRW) which described Israel’s policies towards the Palestinians as apartheid is important. It should serve as a wake-up call and bring attention to the ongoing plight of the Palestinians. The truth, however, is that the conclusion of this report, although it surprised some, did not surprise the Palestinians.

Tens of thousands of Palestinians remained in major cities such as Jaffa, Haifa, and Lod, under Israeli control, while some 750,000 were made refugees. Those who remained in what became Israel were placed in fenced areas called “Arab ghettos.” Some Israeli officials called these places concentration camps, but later, the term was omitted from Israeli archives on purpose.

For years, these Palestinians have needed permits by the Israeli authorities to move from one city to another or merely to go to work. They became strangers in their land and next to their own homes, which were taken from them at gunpoint and given to Jewish settlers.

VIDEO: “The sky was our blanket and the ground was our mattress”: Nakba Survivors Speak

Since day one, Israel was established on the notion of separation, separating Palestinians from Jews, and European Jews from Arab Jews. For example, the babies of Yemeni Jews were taken to be adopted by European Jews and to be raised as white Europeans in the 1950s. This denial of the other has extended to the dead too.

Recently, I came across a video showing the graveyard of the village of Aqer, where my family comes from. The graveyard where my great-grandfather was buried in early May 1948, after being shot dead while defending the village before it was taken over by the invading Zionist militias, is almost empty today except for what seem to be a couple of stones belonging to graves and some scattered trees.

Israeli settlers, whose villas overlook the graveyard, throw their old furniture inside the graveyard, while some of them bring chairs and have BBQ parties there.

The 10-dunum (acres) graveyard appears to be covered in sand, hiding the graves and trying to obscure the accompanying memories. It would appear that the Israeli settlers who live in the nearby villas do not want to be reminded of what happened here once.

Israeli settlers, whose villas overlook the graveyard, throw their old furniture inside the graveyard, while some of them bring chairs and have BBQ parties inside the graveyard. This is the history they don’t want to remember or talk about, the gruesome truth that must haunt them as they host parties and grill meat over the bones of dead Palestinians beneath them.

Palestinians who became internal refugees in what became the state of Israel were not allowed to return to their villages. At the same time, Jewish migrants who chose to move to Israel were given easy access to these villages and were given houses that belonged to Palestinians. Palestinians ended up as refugees in the West Bank, the Gaza Strip, and some neighboring Arab countries.

Palestinian refugees who attempted to return to their villages and towns were shot dead or arrested. From 1948 to 1956 alone, 3,000 Palestinians were shot dead on the northern borders of the West Bank. The aim was to scare refugees not to return, but also to force those who had managed to stay in their homes in what became Israel to move to the West Bank, which was under Jordanian control, and the Gaza Strip, which was under Egyptian control until 1967.

The year 1956 was rife with Israeli massacres of Palestinians, both those living under military rule inside Israel and those in the West Bank and the Gaza Strip.

The year 1956 was rife with Israeli massacres of Palestinians, both those living under military rule inside Israel and those in the West Bank and the Gaza Strip.

In 1956, 49 Palestinians from the town of Kufur Qasim, 23 of whom were children, were shot dead by Israeli forces. The victims were workers returning from their daily jobs without knowing that Israel had imposed a curfew on their town. As of today, Israel refuses to take responsibility for what happened.

This is only an example of how Israel has always treated Palestinians in Israel. Today, Israel claims to be giving Palestinians citizenship and allowing them to vote in elections.

The expulsion of Palestinians continued even after the establishment of Israel. The residents of the coastal city of Al-Majdal were expelled from their homes in 1949-1950 to make space for Jewish migrants. Al-Majdal was famous for its textile factories and Palestinians were forced to leave and move to the Gaza Strip, leaving behind their textile factories and machines. The 105 residents of the town of Abu-Ghosh were also transferred to the West Bank in 1950 by Israeli forces.

Israeli-American activist Miko Peled notes that Israeli generals had described the occupation of the Gaza Strip and the West Bank in 1967 as “finishing the job.” The “job” that they started in 1948, but were not able to finish then. The entire British Mandate of Palestine came under Israeli occupation in 1967, but the “job” was not over yet. Since then, Israel has engaged in a systemic campaign of expelling Palestinians from their land, be it Palestinians who hold Israeli citizenship or Palestinians who live in the West Bank and the Gaza Strip.

The Human Rights Watch report which described Israeli policies towards the Palestinians as apartheid is not the first of its kind by non-Palestinians. In 2017, the United Nations Economic and Social Commission for Western Asia (ESCWA) issued a report by Prof. Richard Falk and Prof. Virginia Tilley calling Israel’s policies towards the Palestinians apartheid. The report was withdrawn following Israeli pressure which pushed Rima Khalaf, the under-secretary general and executive secretary of the ESCWA, to resign in protest.

Earlier this year, Israeli human rights group B’Tselem also described the system Israel maintains against the Palestinians as apartheid, which stirred much anger in Israel.

It is very telling that a number of human rights organizations decided to speak up against Israeli policies, and repeat the accusation of apartheid that the Palestinians have been calling out for decades now – the very Palestinians who have been facing the threat of mass expulsion in Jaffa and in Jerusalem’s neighborhood of Sheikh Jarrah in order to be replaced by Israeli settlers.

These reports are welcome and should serve as a wake-up call. But they don’t come as a surprise to me as a Palestinian, when for 20 years, I can’t visit the West Bank from Gaza. My grandparents passed away in 2003 and 2008 in the West Bank, and my Gaza family was not able to attend the funeral, thanks to Israel’s system of discrimination.

In 2007, my eldest sister passed away at the age of 26 because she was denied a permit to receive medical treatment in Jerusalem. Hundreds of Palestinians from the Gaza Strip alone have passed away for the exact same reason, and no Israeli official has ever been held accountable for these crimes to date.

This is the apartheid which Palestinians have been experiencing for the last 73 years and the world finally started to hear about. Although it is late, the report by the Human Rights Watch will hopefully help advance the human rights of the Palestinians and finally secure our equal treatment in our land.