Now that Trump has expanded his list of exempted countries from new tariffs, this brings into mind two questions: Is this protectionism only rhetoric? Is China the target? 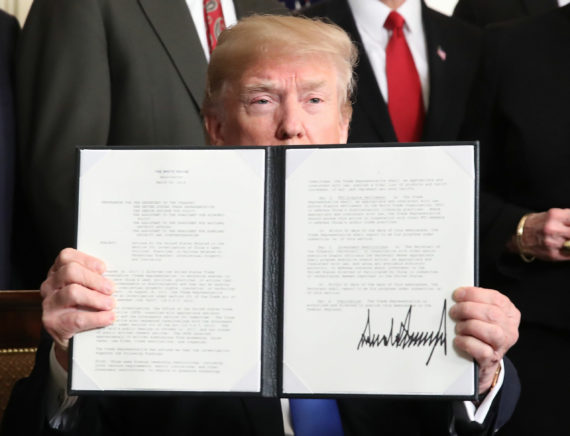 U.S. President Donald Trump holds up a signed presidential memorandum aimed at what he calls Chinese economic aggression in the Roosevelt Room at the White House on March 22, 2018 in Washington, DC. Getty Images

The protectionist economic policies pursued by the Trump administration are now signaling a global trade war. In the early days of March 2018, new tariffs were taken into action by the U.S. government.

The tariffs President Trump signed on March 9 did not apply to Canada and Mexico, which are NAFTA countries.

In his justification Trump said: “…You like the tariffs where they won’t be dumping on our country. What they do is they dump massive amounts of product on our country, and it just kills — it destroys our companies and our jobs. And it’s been happening for so many years, and we are not the beneficiary.”

Many countries reacted to the new tariffs imposed by Trump. Chancellor Angela Merkel called for the European Union to be excluded from such schemes. European Commission President Juncker made it clear that the EU trade bloc would not sit “idly” if Trump goes ahead with these planned tariffs. Trump’s new tariff threat on European cars against the possibility of bloc’s retaliation on US tariffs increased the tension more.

Besides reactions from other states, there is a strong opposition from some Republicans who are traditionally free trade advocates.

On March 22 the U.S. imposed new tariffs on China. These are estimated to be at a worth of 50 billion U.S. dollars. The Trump administration strongly claims that China is committing intellectual property theft crime and is causing the U.S. its largest trade deficit of all times – a 375$ billion trade deficit with China.

Is China the target?

Earlier in March 2018, the EU’s trade commissioner stated that the bloc would “stand up to the bullies.” Due to reactions and critics, the Trump administration announced exemptions that cover the EU and six other countries including Argentina, Australia, Brazil, Canada, Mexico and South Korea. Below we can see that out of the top 5 steel exporters to the U.S., 4 of them – except China – are exempted.

China is going to impose reciprocal tariffs on the U.S., which are worth 3 billion dollars. The Chinese Commerce Ministry stated that this imposition is a response to the steel and aluminum tariffs imposed on China by the U.S. The Chinese government could hit the U.S. with tariffs on agriculture and vehicles meaning that U.S. soybeans, airplanes, cars and cotton could be targeted.

“China cannot be seen to be weak,” Nobel Prize-winning U.S. economist Stiglitz said in an interview.

Now that Trump has expanded his list of exempted countries from new tariffs, this brings into mind two questions: Is this protectionism only rhetoric? Is China the target?

Both sides leave ways to negotiation open. President Trump emphasized that if any country imposes tariffs, the U.S. will do the same. In the upcoming days, we will see whether the two biggest economies of the world will find a common way.