Another Step in Pushing the PKK Out of Iraq?

If the PUK works with Turkey in the latter’s campaign to terminate the PKK in Iraq, in return, the PUK can unseal its relations with Turkey, which were initially fragmented due to the PKK’s activities in PUK-controlled areas. 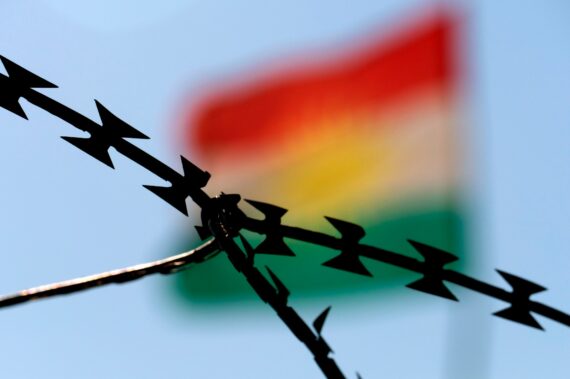 Kurdish flag planted at the Snuny Checkpoint, near the area of the same name, along the main road between the towns of Duhok and Shingal. Getty Images

Last week was quite hot in the Kurdistan region of Iraq. The Patriotic Union of Kurdistan (PUK) Asayish (security) forces closed multiple offices of Tavgari Azadi (Freedom Movement). Tavgari Azadi is a political party based in the Iraqi Kurdistan Region and is affiliated with the PKK. The party was formed on October 17, 2014, and has been trying hard to carve its roots in regional politics so that the PKK could find a new route to spread its political influence. The party was formed in 2014 by leading members of the then dissolved Kurdistan Democratic Solution Party (PCDK), which was part of the Kurdistan Communities Union (KCK), or with its more well-known label, the PKK.

The events occurred rapidly have still not been settled. First, the PUK surrounded the offices of the Tavgari Azadi and gave 24 hours to the party and its affiliated media and civil society organizations to close their offices in Sulaymaniyah. Then, the PUK’s asayish forces initiated an operation to the un-evacuated offices and arrested people resisting the evacuation. The party has already been banned from opening offices in the Kurdistan Democratic Party (KDP)-ruled Erbil and Dohuk. And now its offices in Sulaymaniyah, including the towns of Kelar, Kove, Ranya, Kıfri, Raperin, and Kaladize are closed.

If the PKK is to be removed from the region some day, it must be removed with all its organizations under its umbrella. Thus, the closure of Tavgari Azadi, if sustained and moved forward, is a major step for such a removal.

Although the party is not as big as the KDP and the PUK, this event is not one that should be ignored. Tavgari Azadi is crucial for its capacity to mobilize people for pro-PKK protests under the disguise of legal activities. The party tries to legitimize the PKK and spreads the ideas of the terrorist organization’s cult leader, Abdullah Ocalan, who is currently serving his sentence in Turkey. Hence, if the PKK is to be removed from the region some day, it must be removed with all its organizations under its umbrella. This closure, if sustained and moved forward, is a major step for such a removal.

In his take on the closures, the party’s co-chairman Shilan Shakir spoke to the press and stated that they did not accept the closure decisions because they are a legal party registered in Iraq. The party really is registered in Iraq and even ran for the parliamentary elections on May 12, 2018, and won a seat in parliament. While the party is registered in Iraqi politics, it has faced problems in the Kurdistan Region. Shakir, in his statement, indirectly threatened the regional authorities by claiming that the decision to close their offices is harming Kurdish unity, and further, that this will weaken the PUK. While defending the position that his party is not the political wing of the PKK, Shakir did not feel any need to hide that they have relations with the PKK and that they perceive Ocalan’s ideas as a resolution.

If the PUK works with Turkey in the latter’s campaign to terminate the PKK in Iraq, in return, the PUK can unseal its relations with Turkey, which were initially fragmented due to the PKK’s activities in PUK-controlled areas.

From the Turkish perspective, the step is a necessary one but it is meaningful if it is just the beginning of a consistent and persistent set of measures against the PKK’s existence in the region. The PKK has no single village under its control and has to hide in the caves in Turkey. Nevertheless, the organization controls vast amounts of territory in Iraq. It calls the places under its control Medya Defense Zones just across the Turkish border. Turkey has also started a quiet but persistent campaign last summer in Northern Iraq targeting the PKK controlled areas. Turkey’s campaigns against the PKK over the past decades show that Turkey needs international cooperation to finally terminate the PKK from where it is based. So far, Turkey and Iran seem to agree on this. The PUK’s recent move to close Tavgari Azadi offices in Sulaymaniyah can, for the first time, make the PUK a partner in Turkey’s counterterrorism campaign.