Anwar Ibrahim: Muslim leaders ought to rule with moral conscious

On 20 June, 2018, Anwar Ibrahim – Malaysia’s former prime minister who was sentenced to prison for sodomy in 2015 – gave a speech at SETA Istanbul. 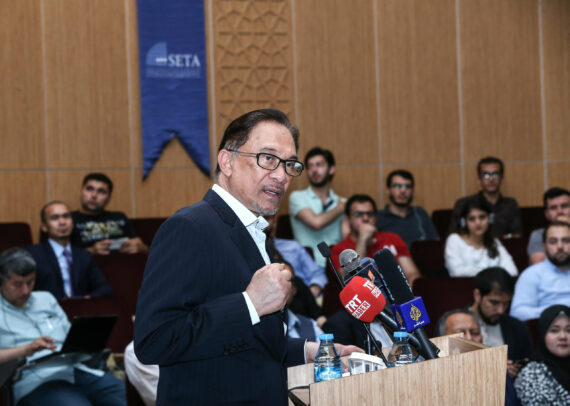 Anwar Ibrahim during his speech at SETA Istanbul on 20 June, 2018. Anadolu Agency

On 20 June, 2018, Anwar Ibrahim – Malaysia’s former prime minister who was sentenced to prison for sodomy in 2015 – gave a speech at SETA Istanbul.

Anwar has served a total of 11 years in prison, serving during different time periods, and was lastly sentenced by former Prime Minister Wajib Razak in 2015. Awar’s 3-year sentence by Wajib Razak was merely an attempt by the former premier to get rid of a feared political rival who was much more popular than him and who had gained the popular vote in the 2013 general election.

The release of Anwar Ibrahim was granted by the Pakatan Harapan coalition led by 92-year-old Matahir Mohamad.

Granted a full pardon by the King on the basis that there was a “miscarriage of justice,” Anwar has after 20 years of struggle, cleared his name.

After receiving the pardon, Anwar made it clear on various platforms that although it was not easy, he had “forgiven” those that sentenced him and the assaults that he had to endure.

Erdogan, a “brother” and “friend in difficulty”

During the event that took place at SETA Istanbul yesterday (Wednesday) SETA General Coordinator Burhanettin Duran made an opening speech. During this speech Duran highlighted the importance of events that are occurring in Malaysia and the correspondence of these events with the elections that are going to take place in Turkey on June 24.

Thanking Anwar for his attendance, Prof. Duran described Malaysia as a country that “plays a role in breaking the negative taboo against Muslims and in the fight against Islamophobia.”

Anwar began his speech by expressing his delight to be in Turkey – reminding the audience that he was in a prison cell only just last month. Prior to Anwar’s visit to Turkey, many circles were questioning the reason why he was visiting Turkey just before the country was to hold its parliamentary and presidential elections.

Before starting his speech, Anwar Ibrahim also felt the need to clarify this issue. Explaining that President Erdogan had invited him and his family to the country, Anwar emphasized that he was in Turkey “on this basis.”

“When I was arrested, Erdogan invited my family to Turkey – a brother and friend in difficulty – told Aziza (Anwar’s wife) ‘promise me when Anwar comes out of prison, you’ll visit us.’”

“That’s the basis I came here so there’s no confusion as to why I’m here before the elections,” Anwar said.

Underlining the respect he had for President Erdogan, Anwar stated: “From Pakistan to India – whether you agree with him or not – Recep Tayyip Erdogan is the only leader that is speaking out for the Muslim world.”

Reminding the audience that he was stripped from his freedom of speech, Anwar repeated that from now on he will speak his conscious.

“I was never made foreign minister because I’m not a good diploma. I speak my mind and I pay the price. Yes there was freedom to speak, but no freedom after I spoke.”

Throughout the hour-long speech that he made, Anwar repeatedly emphasized the importance of institutional governance in Muslim-majority countries.

“For a country to propel economically, reform is necessary,” he said.

Highlighting the fact that credit rating agencies “do not care if there is a growing gap between the rich and poor” and only care “about making a country more attractive,” Anwar stated that economics must be categorized in justice and compassion.

Continuously referring to corruptions in the region, Anwar described this as “institutionalized corruption” and stated that the future work of the Muslim world must be to reform institutions and governance.

Preserving his humor yet addressing a serious problem in the Muslim world, Anwar stated “Muslim leaders cannot go to Hajj and Umrah every year and then come back to their countries and talk Islam and justice, when they continue to shredder more money.”

Among the answers that he gave to questions regarding how he and his government will transform the system in Malaysia, Anwar listed elements such as the freedom of media, economy, care for people, health and housing – factors that he claimed were the most important.

In reference to the hypocrisy occurring in the west, Anwar strongly expressed that he does not want the country to be dictated by the west.

“I do not want my country or myself to be dictated by the western or eastern agenda but by the Malaysian people themselves.”

“I’m a firm believer in collaboration and interchange. However, I don’t dictate my political position and will not be dictated by other’s discourses.”

Before finishing his speech, Anwar emphasized the need for reform and finished off by stating: “All we ask for is Muslim leaders to rule with their moral conscious.”

Anwar is expected to become the prime minister of Malaysia in two years, as he has said that he wants to stay as a back-bencher for a while.