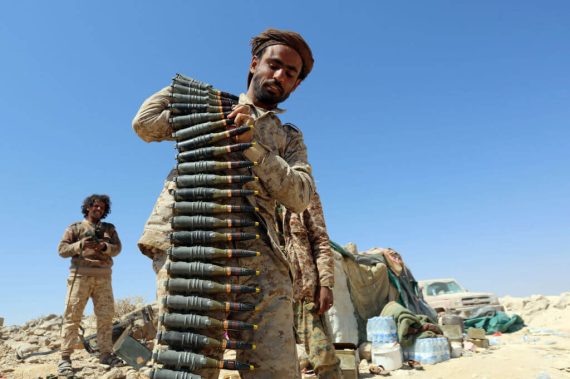 Yemeni tribesmen from the Popular Resistance Committees, who support forces loyal to the Saudi-backed Yemen president, keep watch at Nihm district, on the eastern edges of the capital Sanaa. Photo by Abdullah Al-Qadry, AFP via Getty Images

Since March 26, 2015, Yemen has become the focus of the international community. It has received attention due to the civilian catastrophe and famine as well as the increase in arms sales from major Arab countries in the Middle East.

Although Yemen is a poor country, its arms purchases have cost it hundreds of millions of dollars over several decades. Warring parties in Yemen have bought large quantities of conventional weapons, some of which are modern weapons from the United States and other Western countries, while most came from Russia and the former Soviet Union. Houthis have greatly benefited from this huge stockpile to fight a long-term battle, and to maintain a superior position in terms of military equipment and firepower compared to the Yemeni national army and the popular resistance groups supported by the Kingdom of Saudi Arabia and the United Arab Emirates (UAE).

On the other hand, the Yemeni government of Hadi stopped buying weapons, not because it could not afford to do so anymore, but because it was not allowed. The Arab coalition, which was created to intervene militarily in Yemen in support of the legitimate Yemeni government against the Houthi group in 2015 and which was led by Saudi Arabia, imposed a total embargo on the purchase of weapons by the Houthis. This made the Saudis the main gate for the arms supplies to the Yemeni government forces fighting on the ground, allowing the Arab coalition to control the course of war completely.

Read: To End the Civil War in Yemen, the Local Dimension is the Key

The United Nations Security Council (UNSC) Resolution No. 2216, Paragraph 14 (April 15, 2015) authorized neighboring countries, namely the Saudi-led Arab coalition, to conduct inspections of shipments arriving at Yemen’s coasts to ensure that the ships are not carrying weapons to the parties under embargo. The embargo, by the way, does not include the Yemeni government. The resolution was explicit and clear to include the leaders in President Ali Abdullah Saleh’s party and the Houthi group and those associated with them.

Here, I will discuss the three main countries that have been involved in arms trafficking, directly and indirectly, in the Yemen civil war: Saudi Arabia, the UAE, and the Islamic Republic of Iran.

Weapons as an indicator of a troubled strategic partnership

There is a close link between the war waged by Saudi Arabia in Yemen and the steady increase in the volume of its arms purchases to such an extent that in 2020, the country jumped to the forefront of countries importing weapons on the global level: according to the Stockholm International Peace Research Institute (SIPRI), Saudi Arabia ranked second after India.

In March 2021, SIPRI stated that Saudi Arabia is behind 11% of the world’s total arms imports. This development was mainly due to the open-door policy pursued by former U.S. president Donald Trump towards the country. Trump authorized a $110 billion arms deal with Saudi Arabia, which includes ongoing arms sales and memoranda of intent for future sales.

According to SIPRI, Saudi Arabia was the largest customer of American weapons between 2016-2020.

According to the Stockholm International Peace Research Institute, Saudi Arabia was the largest customer of American weapons between 2016-2020, and is committed to purchasing weapons, spare parts, and related training and maintenance services. The U.S. Congress received notification of sales deals amounting to $138.9 billion, including $90.09 billion during the eight years of the Obama administration and $48.81 billion in two years of Trump’s presidential term.

Following the murder of journalist Jamal Khashoggi in the Saudi consulate in Istanbul on October 2, 2018, Western arms sales to Saudi Arabia became more complicated. While the United Kingdom and France remained committed to providing arms to Saudi Arabia and the UAE, despite critical voices among the public, only Germany, as a major exporter, stopped signing arms sales contracts with the kingdom.

And despite the position of the U.S. Congress against selling arms to Saudi Arabia, the Trump administration was able to pass the huge sales through the direct commercial deals that Saudi Arabia had concluded with American arms manufacturers, including the third-largest company in the United States, Raytheon. 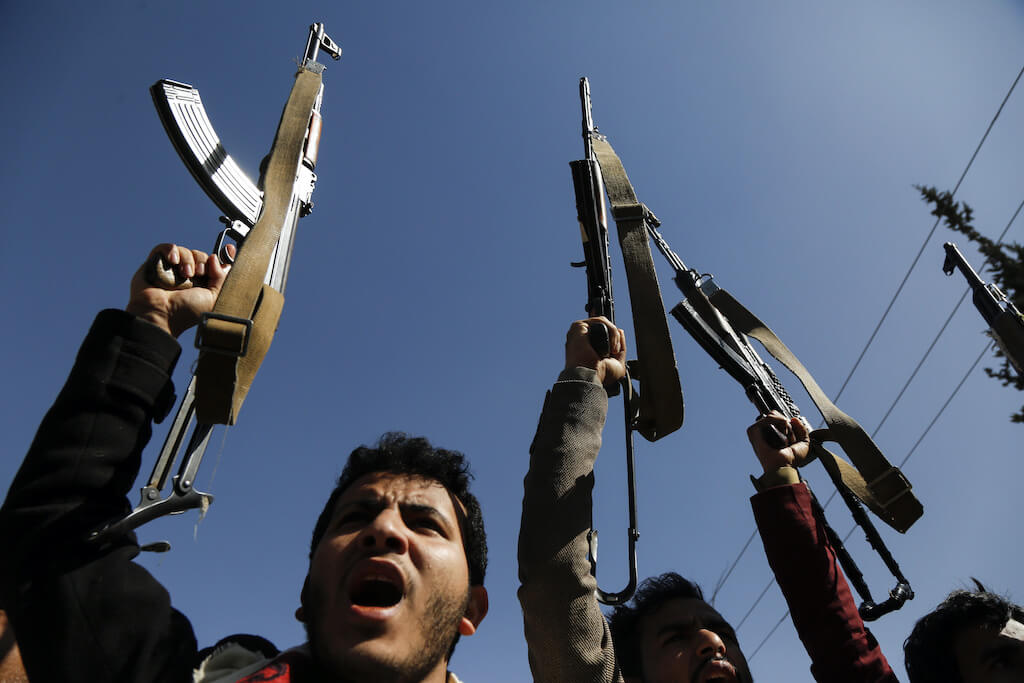 Young supporters of Yemen's Huthi movement raise their fists up as they chant slogans during a demonstration in front of the closed US Embassy in the capital Sanaa on January 18, 2021. Photo by Mohammed Hamoud, Anadolu Images

There is no better evidence than the information that was revealed by Clark Cooper, the U.S. Assistant Secretary of State for Political-Military Affairs, and Heidi Grant, the director of the Defense Security Cooperation Agency (DSCA) that is part of the United States Department of Defense, in a joint press conference held at the Pentagon in early December 2020 at the end of the Trump’s term.

They explained that the United States generated $50.78 billion in intergovernmental “foreign military sales” and $124.3 billion in “direct trade sales.” Meanwhile, President Biden’s strict position on arms sales to Saudi Arabia appears to be a thing of the past as he recently agreed to sell Saudi Arabia $650 million worth of weapons, in a deal that includes 280 AIM-120s air-to-air missiles.

Over the past decade, the UAE has ranked third and fourth among the most important arms importing countries in the Middle East, according to the Stockholm Institute. The UAE has been the seventeenth-largest importer of American weapons between 1996 and 2020, and the fifth-largest importer between 2016 and 2020.

Moreover, the number of U.S. arms deals with the UAE increased during the past five years, and include Terminal High Altitude Area Defense (THAAD) and PATRIOT PAC-3 air defense systems. During the same period, the UAE received thousands of relatively low-value armored vehicles and 1,000 guided bombs from the United States. These were used in Yemen along with high-value combat aircraft and missile defenses.

Similar to Saudi Arabia, the UAE bought weapons worth billions of dollars to cover its needs resulting from its active involvement in the Yemen war. This deal is still having a hard time getting through Congress, but President Biden, who halted the deal immediately after he took office, appears to be heading towards releasing it soon, according to statements by Mira Resnick, deputy assistant secretary of state, on November 17, 2021. The United States is fully committed to selling 50 F-35 stealth fighters to the United Arab Emirates.

According to the Middle East Institute, despite the UAE withdrawal from the Arab coalition in 2019, the inheritance it left behind was local groups, including the Southern Transitional Council (STC) that was formed in May 2017, which are in possession of heavy weapons mixed with ambitions of control of contested territories. This has weakened the rule of the Yemeni government in the liberated territories and diverted the coalition’s focus from fighting the Houthis to fighting the Houthis and the Yemeni Congregation for Reform (al-Islah) party, creating inter-coalition divisions as a result.

An influence built through an invisible bridge of armaments support

Iran is one of the major parties involved in the Yemeni civil war. Although its interference remains indirect, it is very effective. Iran’s arms smuggling in Yemen has been recorded since February 2013, when the Yemeni navy intercepted the ship Jihan 1 loaded with weapons for the Houthis en route to the port of Midi in the Red Sea.

Specific weapons, especially winged missiles and drones, in addition to guided anti-armor weapons, all come through extensive and complex smuggling operations. These weapons constitute a major source of supply for the Houthis, and are primarily responsible for the qualitative shift in the course of the war. This has been exemplified since 2018 by the targeting of the Saudi depth with missiles and drones.

On November 25, 2019, a U.S. warship seized a significant cache of Iranian weapons bound for Yemen’s Houthi rebels. The U.S. Navy rarely stops intercepting boats and ships carrying weapons originating from Iran and heading to Yemen. Similar operations are carried out by the Australian Navy in addition to the ships of the Saudi-led Arab coalition. The last shipment of smuggled weapons intercepted by the U.S. military was on May 8, 2021, and it included “prohibited weapons” from a sailing boat which was in international waters north of the Arabian Sea.

In a statement the U.S. Fifth Fleet said that the weapons included dozens of Russian anti-tank guided missiles, thousands of Type 56 assault rifle and Chinese assault rifles, and hundreds of PK machine guns (Pulemyot Kalashnikova), snipers, and rocket launchers. Since the Iranian weapons smuggled to the Houthis in Yemen are not subject to international control, it is difficult to determine the quantities of weapons that have actually reached the Houthis and are being used in the fighting.

However, there is increasing evidence which suggests that individuals or entities in Iran supply significant volumes of weapons to the Houthis as reported by the United Nation’s most recent report by the Panel of Experts on Yemen (S/2021/79) and as proven by the observational shift in the course of the fighting which indicates Iran’s clear armament influence in the Yemeni war. The influence extends to include appointing and sending Hassan Erlo, an officer in the Quds Force of Iran’s Islamic Revolutionary Guard Corps (IRGC), as Iran’s ambassador in Sana’a, a move which completely ignores the Security Council resolutions and international law.

Today, Iranian weapons have become an oft-repeated topic in the Arab coalition’s political media, and a topic that preoccupies the United States which has become more understanding and aware of Iran’s serious influence on the war in Yemen, but not to the extent of deterring it. 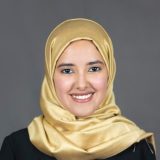 Ahd Yaseen Al-Tamimi is a master’s student at the Turkish studies program at Ibn Haldun University, Istanbul. She served as an ambassador for Yemen in the United World College of the Adriatic (UWCAD) in Italy. Al-Tamimi graduated with a bachelor’s degree in financial economics & business administration from United States.

Also Read
France-Greece-Saudi Arabia Alliance in the Eastern Mediterranean
We use cookies to optimize your online user experience. To learn about our use of cookies and how you can manage your cookie settings, please see our Privacy Policy. By continuing to use our site you are excepting our use of cookies.Accept Cookies & CloseMore Info