The UAE is fuelling a 'war within a war' inside Yemen; not only distracting from the original aim of ousting the Houthis, but putting its interests in Yemen before achieving the aim of the Saudi-led coalition. 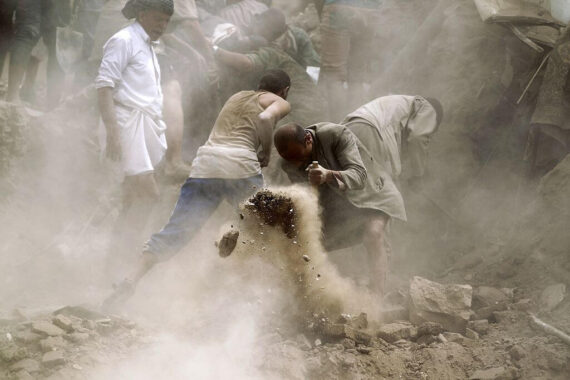 Yemenis search for survivors under the rubble of houses in the UNESCO-listed heritage site in the old city of Yemeni capital Sanaa, on June 12, 2015 following an overnight Saudi-led air strike. Photo by Mohammed Huwais, AFP via Getty Images

The conflict in Yemen began in September 2014 when the Houthi rebels commenced their gradual, but violent takeover of the capital city Sana’a. This led to a coup that forced President Abdurabbuh Mansour Hadi out to his home town and temporary capital city, Aden in February 2015.

By March, Saudi Arabia formed a military coalition, including the United Arab Emirates, to oust the rebels, restore the government and to bring stability to the region. The coalition became notorious for violating human rights, bombing civilians and destroying vital Yemeni infrastructure.

Both Saudi Arabia and the UAE agree that the Houthis are the main threat to regional security. Despite the rebels’ military capabilities have never been enough to change the balance of power in the region, their strong links to the Iranian regime turns the Houthis into a threat by proxy.

The group, which is based in the northern province of Sa’ada, which borders Saudi Arabia, has the capability to attack major Saudi cities, including Jeddah. Rockets fired from Yemeni territory are regularly intercepted, however in situations where they aren’t, the Houthis are able to inflict damage.

On November 23, 2020, the Houthis claimed responsibility for attacking an Aramco oil company distribution station in the city of Jeddah. Houthi spokesman, Yahya Sarea, warned foreign companies and residents in the neighbouring kingdom, saying they should exercise caution as “operations will continue.”

“The strike was very accurate, and ambulances and fire engines rushed to the target,” Sarea said, explaining that the Houthis used an Iranian-made Quds-2 type winged missile to carry out the attack.

Such attacks not only harm Saudi Arabia, but demoralize the rest of the Gulf Arab countries as weaknesses in their military powerhouse begin to show. Therefore, restoring relative stability and disarming the Houthis in Yemen is paramount to both Saudi Arabia and the UAE.

Whilst Riyadh and Abu Dhabi agree that a stable Yemen is important to regional security, a problem therein lies in what a stable Yemen looks like and where they are able to secure their separate political and economic interests.

The UAE entered the coalition understanding the way in which Aden is significant to Abu Dhabi’s economic and strategic standing in the region. Having a strong presence in Aden means the UAE would have the luxury of the Bab al-Mandab strait, along with easier access to the Indian Ocean and more control over the Red Sea.

Spreading its sphere of influence to the Socotra Island means the UAE would be able to strengthen its commercial and military projection in the Indian Ocean, as it has shown interest through quietly pumping investment into the island and arming secessionists.

Rifts became apparent as early as the spring of 2017 when the UAE helped the formation of the Southern Transitional Council (STC), which Hadi immediately declared illegitimate. 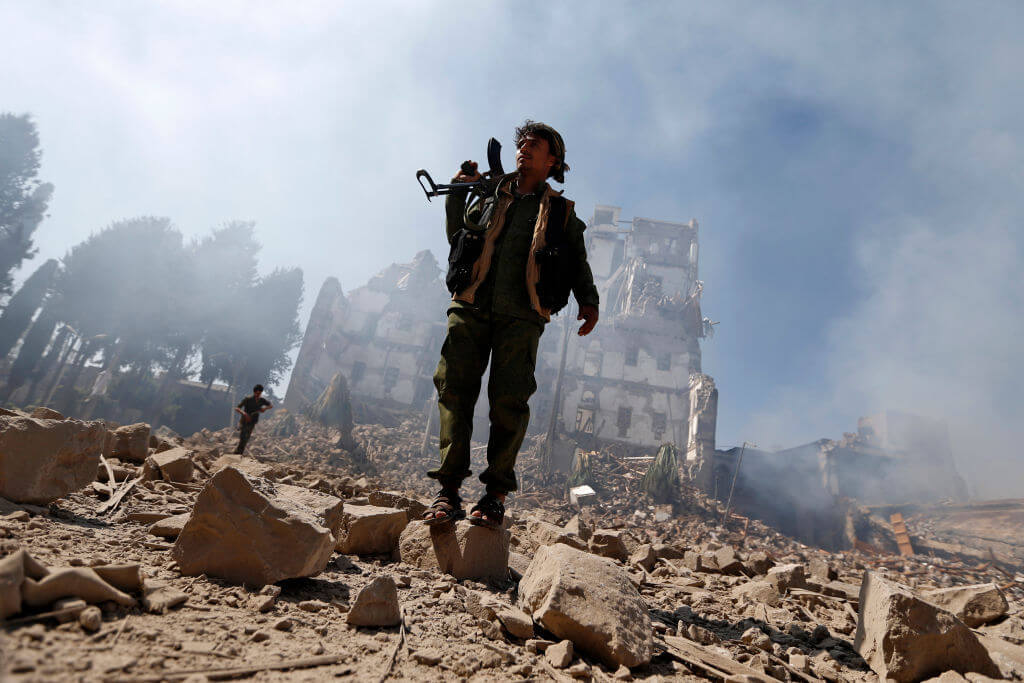 Houthi rebel fighters inspect the damage after a reported air strike carried out by the Saudi-led coalition targeted the presidential palace in the Yemeni capital Sanaa on December 5, 2017. Photo by Mohammed Huwais, AFP via Getty Images

The southern separatists seek renewed independence for southern Yemen, which was ruled as a separate state until 1990.

The UAE also heavily backed local resistance forces in Aden and other parts of the southern regions to liberate them from the Houthis. However, areas from the northern areas such as Taiz, which has a reputation for being a Muslim Brotherhood stronghold, did not receive as much help from the UAE, despite it being besieged by the Houthi rebels.

On August 6, 2019, two fighters from the UAE-backed Southern Security Belt were killed during clashes with pro-Hadi government forces. A day later, the STC deputy leader, Hani bin Breik, marched on the Maasheeq Palace in Aden and called on secessionists to overthrow Hadi’s government in the coastal city.

It became clearer than ever that the UAE is fuelling a “war within a war” inside Yemen; not only distracting from the original aim of ousting the Houthis, but putting its interests in Yemen before achieving the aim of the Saudi-led coalition.

From the outside looking in, the coalition was divided which was creating yet more bloodshed in Yemen in addition to the casualties the indiscriminate coalition airstrikes have caused.

Reconciliation and hope for the future

In a bid to restore relative stability, the two sides signed a power-sharing agreement in Riyadh on November 5, 2019. The ambitious Riyadh Agreement aimed to create a 50-50 cabinet and to work together to restore the Hadi government back to Sana’a.

The unity government can be as successful as long as the reasons behind its formation remain stronger than the divisions that continue to haunt northern and southern Yemen. It’s impossible to say that the newly formed government will solve a problem that created wars between the two populations and caused southern separatists to believe that northern Yemen was occupying the south.

In order to nurture a strong unity government that goes beyond temporarily sustaining peace, grievances of both populations need to be heard and longer-term solutions must be brought to the table by creating a democratic space and ample conflict resolution. The unity government must be seen as a stepping stone to lasting stability, not an ultimate achievement.

Women, local leaders and religious and tribal figures need to be included and sustainable vision for a well-represented and localised Yemeni government must be on the table for a fruitful post-war vision. As it stands, the unity government is all-male, creating a cabinet that excludes women for the first time in 20 years.

Can the explosion create more divisions?

On December 30, 2020, an aircraft carrying members of the recently formed unity government landed at Aden International Airport, only for the passengers to be met with explosion and gunfire as they disembarked.

The attack left 25 people dead and 110 others injured, but none of the passengers were hurt. At the wake of the attack, there were concerns how such an assault could affect the unity government.

Both the Hadi government and the STC blamed the Houthi rebels of the attack. Yemen’s Prime Minister Maeen Abdulmalik sustained accusation that the Houthis were behind the explosions.

“Preliminary investigations indicate that Houthi militias stand behind this crime,” Saeed said as the newly reshuffled Cabinet met for the first time in Aden on December 31, 2020, adding that “intelligence also indicates that some Iranian experts were prepping for such an operation over the last few months.”

The Houthis, however, released a statement denying carrying out the attack and accused the two sides of using the rebels as a scapegoat and distraction to keep the differences between the two parties under wraps.

For now, the explosion seems to allow the two to unite under the premise of defeating the common enemy which is the Houthi rebels.

This unity could fail if sentiments that the Houthis are a “northern problem” that can only be ridded under an independent South Yemen begin to grow into the mainstream. This means delicate diplomacy and inclusion needs to be exercised between the two sides.

The newly-formed government has potential to help shape a more peaceful transition in a post-war Yemen, but this can only be possible if the parties involved begin to prioritize inclusion and fairness for all citizens regardless of tribe, gender and sect. 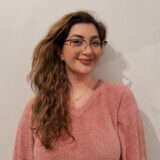 Diana Alghoul is a British-Palestinian journalist who holds a MA in International Conflict Studies from King's College London. Her areas of interest are Palestine/Israel, Yemen and women's rights across the MENA region and the rest of the world. She blogs on spirituality and plant-based living on www.dianaalghoul.com