Despite making their ways to public life in Britain, Muslims are still viewed as the 'other.' 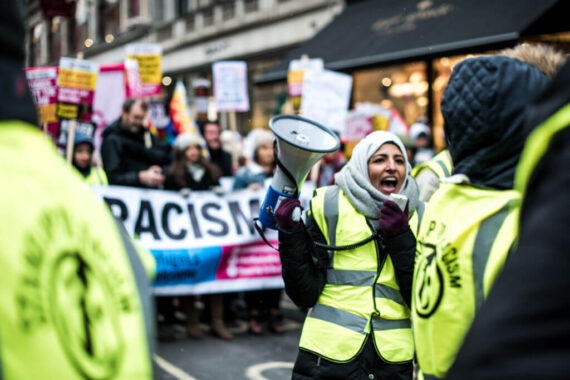 A woman with megaphone seen chanting slogans at the front of the march. Thousands of people took to the street of London for the march against racism four days before the 21st March International Day for Elimination of Racial Discrimination. The march is organized by the group Stand Up to Racism as an expression of unity against racism, Islamophobia and anti-Semitism. Photo by Brais G. Rouco/SOPA Images/LightRocket via Getty Images.

The recent Swiss referendum to ban the wearing of the burka and niqab in public places follows similar decisions by the governments of France, Belgium, and Austria, reinforcing the mediatized perception of Muslims as the “difficult-to-integrate “other” in Europe.” This development converges with the state level institutionalization of anti-Muslim sentiment by the likes of Austrian Chancellor Sebastian Kurz, who wants to form a common front against “political Islam.”

An EU level policy idea already floated by French President Emmanuel Macron, who believes that “Islam is a religion that is in crisis today all over the world,” and the implication that the presence of Muslims in Europe are a threat to domestic security and the national identity.

The truth of course, is far more complex. European Muslims are well aware of the complex socio-political challenges before them and are increasingly challenging Islamophobic narratives as their communities grow and younger people become active agents of transformative social change. This has led to the emergence of various political leaders and social influencers who have become vocal public figures and are positively impacting their communities and wider societies. This can be seen in the rise  of assertive Muslim politicians in mainstream parties across Europe such as the Italian MP  Khalid Chaouki,  Mahinur Özdemir the first  hijab-wearing MP in Belgium and emergence of the DENK party in the Netherlands.

In Britain, despite facing various socio-economic inequalities, Muslims are an essential part of the U.K’s economic and cultural fabric.  Around 10,000 of National Health Service (NHS) doctors and nurses are Muslim; they were at the NHS front line during the Covid-19 crisis, and at forefront of community responses to the pandemic. 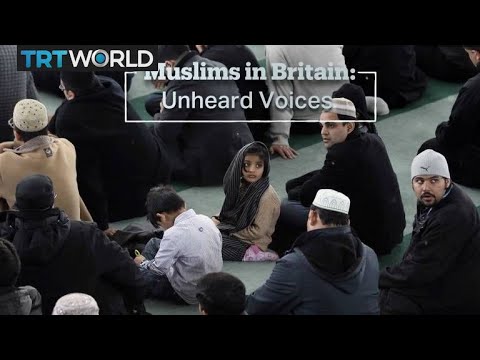 They have also made significant strides in mainstream politics at local and national governance level, with some achieving senior positions, such as the current Mayor of London, Sadiq Khan, Baroness Sayeeda Warsi, a former cabinet member of the Conservative government and the recently elected Leader of the Scottish Labor Party –Anas Sarwar. Muslim Leaders have also emerged from faith based NGOs such as the Muslim Council of Britain, which recently elected its first every  female leader,  Zara Mohammed,  while others lead think-tanks, such as Halima Begum, CEO of  the Runnymede Trust.

In the media, sports and cultural industries, the journalist Mehdi Hasan became internationally known as an anchor for Al-Jazeera English and is currently host of a NBC news program. The writings of Guardian columnist Nesrine Malik are among the sharpest commentaries of race, religion and politics and Nadiya Hussain, is a household name after winning the Great British Bake Off competition, and has hosted several TV programs for the BBC. Other British Muslims have reached the highest levels of their chosen fields in the world of sport like the long-distance runner ‘Mo’ Farah, a four-time  Olympic gold medalist,  Moin Ali, who has captained the English Cricket team and Amir Khan  a former Light-Welterweight world boxing champion.

Like other European states, Britain needed the post-war labor of immigrants from its former colonies, which resulted in a multiculturalist model that enables Muslims and other minorities to achieve a large degree of social mobility.

Though currently going through immensely turbulent times, the U.K is still viewed by outsiders with a degree of admiration for its historical achievements, continuing political influence on the world stage and soft power of its creative industries. Like other European states, Britain needed the post-war labor of immigrants from its former colonies, which resulted in a multiculturalist model that enables Muslims and other minorities to achieve a large degree of social mobility.

Read: Anti-Turkey Cartoon by Geert Wilders Has a Backstory in the Netherlands

These hard-won gains were achieved through the patient efforts of different advocacy groups and increased political activism accelerated by the demographic growth and maturation of a second and third generation that came of age in the 1990s and early 2000s. The social capital which they acquired came from making the most of higher education opportunities and experience of working as professions at every level of British society.  Those interested in representing Muslim communities and gaining political influence, joined mainstream parties, became local government councilors, were elected as MPs and a handful entered the House of Lords.

These advances are all the more noteworthy given the tough challenges that this faith group encountered and continues to experience today. Social polarization has reached levels not seen for decades, as forms of prejudice multiply –particularly racism and Islamophobia, which are rationalized in the name of freedom of speech.

The continued fallout from BREXIT, presence of refugees, growth of the far-right and unresolved anxieties about security have shaped a climate of suspicion towards ‘outsiders.’ Muslims are often the focus of mistrust and accused of being the “enemy within,” their faith incompatible with “British Values” and alleged to have a unique vulnerability to criminality and violence.

Before his election as leader, Anas Sarwar was subjected to racist slur from within the Labor party and another senior member withdrew her support for Sarwar after seeing a picture of his hijab-wearing wife.

Most of the leaders and influential figures highlighted here have struggled with racist and Islamophobic abuse on a regular basis. Some of shared on social media while others have faced institutional barriers and media attacks. A recent instance was when the leader of the Runnymede Trust was misrepresented by Conservative MPs in a Women and Equalities questions session in the House of Commons. Before his election as leader, Anas Sarwar was subjected to racist slur from within the Labor party and another senior member withdrew her support for Sarwar after seeing a picture of his hijab-wearing wife.

These and many other incidents vindicate the observation by Sayeeda Warsi over a decade ago, when she argued that prejudice against Muslims had “passed the dinner-table test.” Islamophobia and racism has quantifiably worsened in recent years to the point of being normalized in the media and political establishment.

Muslim journalists like Nesrine Malik regularly receive abusive emails and are trolled on their social media and Nadiya Hussain has often encountered racial and religious discrimination both on the street and within the industry that she works in. Furthermore, athletes like Moin Ali and Mo Farah have both complained about racism  they have experienced during their careers.

Representation in the elite levels of political power while symbolically encouraging, is not enough. Most of the politicians highlighted above downplay their faith so they don’t fall out of favor with their party leaders or alienate the voting public.  Other figures are only able to secure positions because their political values align with the party leadership.  This is illustrated in cases of former Conservative cabinet member  Sajid Javid, who denied the existence of Islamophobia, citing his own appointment as proof and  Munira Mirza –an advisor to Boris Johnson,  was selected  to lead the Commission on Race and Ethnic Disparities, even though she believes institutional racism is a myth.

To shape a more amicable future, Western European governments would need to reset relationships with their Muslim citizens and conduct honest conversations that acknowledge failed policies and misperceptions. This looks highly unlikely given the converging political consensus that appears to be forming against Muslim political visibility.

European Muslims communities also need to do better and resolve their internal divisions and nurture infrastructures that help cultivate visionary leadership which can address the multidimensional challenges confronting their communities and wider societies. The increasing number of talented Muslims entering public life raises the possibility that this can become a reality. 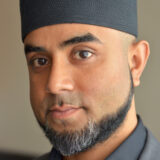 Sadek Hamid is author of Sufis, Salafis and Islamists: The Contested Ground of British Islamic Activism and co-author of British Muslims: New Directions in Islamic Thought, Creativity and Activism.