On the evening of the Netherland's NCTV report was leaked to the media, Geert Wilders published a cartoon on Twitter insulting Turkey's President Erdogan. 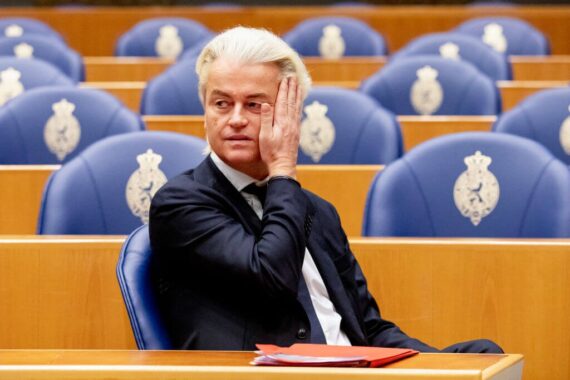 PVV leader Geert Wilders seen during the debate about the coronavirus measures on January 5, 2021 in The Hague, Netherlands. Photo by Niels Wenstedt, BSR Agency via Getty Images

On February 15, an internal draft report prepared by the National Coordinator for Security and Counterterrorism (NCTV) working under the Ministry of Justice and Security in the Netherlands was leaked to the HP/De Tijd, a Dutch-language monthly opinion magazine.

The NCTV claims that there is a possible connection between Erdoğan’s “anti-Western rhetoric” and a tram terror attack in Utrecht in 2019, in which four people were killed by Gökmen Tanış. The draft report claims that Turks may be “vulnerable” and open to influence from Turkey and its president, Recep Tayyip Erdoğan. It also claims that the Turkish President is following a Salafi Islamization strategy, which may further influence Dutch Turks.

The NCTV draft report argues that the Islamic movement of Salafism originated in Saudi Arabia and has now a huge base of supporters in Turkey. It is claimed that Turkish organizations such as Milli Görüş and the “Turkish Muslim Brotherhood” – if the latter has ever existed – have ideologically merged.

The report further alleges that Turkey’s President Recep Tayyip Erdoğan has a secret agenda and ambition to represent himself as the “leader of the Sunni Muslims” by 2023, the centennial anniversary of the establishment of the Republic of Turkey. This in all in line with his plot to turn Turkey into an Islamic state.

The report warns about domestic radicalization through social media and the rise of Salafism in the country. It further alleges that the Turkish government provides leeway to Salafist-jihadist organizations, such as the IBDA-C (The Great Eastern Islamic Raiders’ Front) and the Kaplan movement led by Metin Kaplan, and indirectly supports specific groups in Syria, such as Hayat Tahrir al-Sham.

The draft report, in fact, mysteriously omits the fact that both the IBDA-C and the Kaplan movement have been on Turkey’s terror watch list for almost a decade. On the contrary, according to research by the Dutch Nieuwsuur and Trouw (Dutch: Nieuwsuur en Trouw) news agencies that conducted the investigation, the Dutch government itself supported Jabhat al-Shamiya, an armed group in Syria, which the public prosecutor in the Netherlands labeled as terrorist.

The Utrecht terrorist attack of 2019

The NCTV argues that President Erdoğan’s condemnation of the far-right terrorist attacks on Muslims in Christchurch in 2019 might have played a role in Gökmen Tanış’s radicalization and plans to organize an attack in the Netherlands. The terrorist attack in Utrecht killed four civilians. The attack took place a day after “Erdoğan’s anti-Western media appearance,” the analysis claims. After the shooting on March 18, 2019, the Public Prosecution Service (OM) revealed the text which was written on the weapon. According to the sources of Radio Television Luxembourg (RTL), the firearm and silencer had the following statement written on them, “Those who follow Sharia go to paradise. Whoever follows democracy goes to hell. You kill people who are Muslims. And Allah lets me kill you…” (translated from Dutch).

However, the 37-year-old Turkish-born Gökmen Tanış, who had been intermittently addicted to hard drugs and alcohol, was a supporter of Metin Kaplan and expressed his hate towards the Turkish president several times. The claim that Tanış might have been inspired by Erdoğan to organize an attack is, therefore, baseless and exposes the authors’ biases.

Although the draft report immediately received heavy criticism for factual mistakes and inaccuracies, anti-Turkey politicians in the Netherlands, led by the far-right leader of the Dutch Party for Freedom (PVV) Geert Wilders, suggested that the draft report proved his argument and justified his anti-Turkey and anti-Erdoğan sentiments. On the same evening, Wilders published a cartoon on Twitter illustrating half of President Erdoğan’s face on a Turkish flag and the other half on the banner of DAESH (ISIS) with the word “terrorist” written on it.

Read: “We Are Scared of Our Own Shadow”: Raphael Liogier on Islamo-Paranoia

Following the Dutch-Turkish diplomatic crisis of 2017, the two countries have set the aim of improving their bilateral relations. On January 26, 2021, the eighth meeting of the Turkish-Dutch Bilateral Wittenburg Conference was held. The conference bode well. The ministers of the two nations exchanged views on various issues including trade and innovation as well as their common concerns regarding their fight against terrorism.

The NCTV’s draft report has a potential to impact the Dutch-Turkish community negatively. Recently, political parties demanded a clarification from Ferdinand Grapperhaus, the Minister of Justice and Security, on how this “unfinished” report could have been leaked. Grapperhaus said the final report will be published in a few months and at that time, the ministries and the security services can express their views and opinions on the report.