According to the IOM, 348 people have died or gone missing by the end of February 2022. 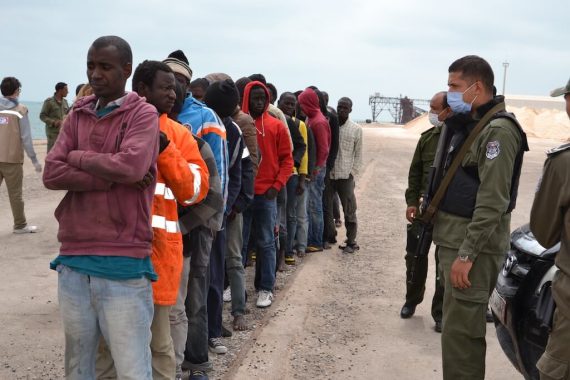 Illegal migrants, who wanted to go to European countries, are seen at the port of Zarsis near Tataouine, Tunis after being rescued by the Tunisian fishermen. Photo by Tasnim Nasri. Anadolu Images.

The death toll has increased to 25 as Tunisian officials found five new bodies of migrants who lost their lives off the Tunisian coasts on their way to Europe. The bodies were found on March 18 and 19, 2022.

The total number of migrant deaths involved in the incident is unknown as there is no information on the number of people who were in the capsized boat, while the search for survivors continues by the Tunisian authorities.

The bodies of dead migrants washed up on Nabeul Beach, to the northeast of the country.

“Migration remains relatively muted in Tunisia, despite its increased popularity as a transit country and the growing number of people drowning off its coasts,” Michela Pugliese, a migration and asylum researcher at Euro-Med Human Rights Monitor, told Politics Today.

Many refugees choose Libya and Tunisia as points of departure for Europe. According to the International Organization of Migration (IOM), at least 348 migrants and asylum seekers have died or gone missing in 2021, joining over 23,000 others who have lost their lives since 2014.

The busiest and deadliest migration route to Europe

Many migrants use the Central Mediterranean route to reach Italy. In 2020, according to the UNHCR, 34,154 people arrived in Italy. Reports show that over 88,000 migrants arrived in Europe via the Mediterranean in 2021.

According to the IOM, 348 people have died or gone missing by the end of February 2022.

Thousands of North African and Middle Eastern refugees and asylum seekers try crossing the Mediterranean every year as a result of poverty and conflict in their home countries.

According to the European Council’s data published in February 2022, Bangladeshis and Egyptians use the Central Mediterranean route from North Africa via Tunisia to reach Italy (Europe).

“Europe is violating its obligations under the 1951 Refugee Convention,” noted Pugliese. “There is a double standard in the reception and protection of asylum seekers.”

Pugliese added, “Authorities address this problem with the same security policies inherited from authoritarian regimes, preventing access to residency permits or long-term legal stays. Also, there is still an absence of a national asylum system and legal framework; the UNHCR continues to be in charge of the entire Asylum Determination Process.”

The asylum researcher told Politics Today that “half of the EU member states consider Tunisia a ‘safe country of origin,’ meaning that when Tunisian nationals reach Europe, they tend to be quickly repatriated and their asylum claims impatiently rejected. What Europe mainly does for migrants leaving Tunisia is provide support to the authorities to increase their capacity to prevent migrants’ departures.”

“In reality, through forced returns, border externalizations, and bilateral agreements, Europe is committed to containing migration and systematically denying the right to seek asylum for people coming from Africa, while safeguarding the rights of Ukrainian refugees,” Pugliese concluded.