The next decade will burden non-state armed actors with higher costs for security, education, logistics, and fewer opportunities to harm the targeted army. 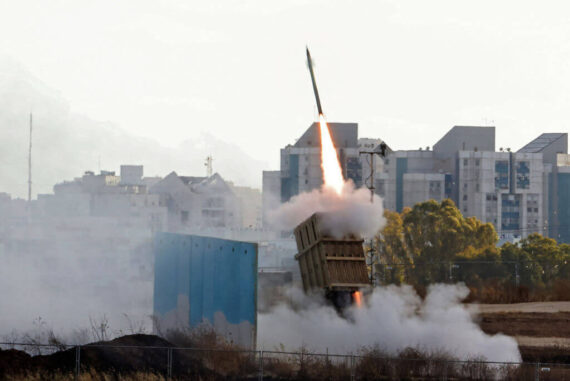 Israel's Iron Dome aerial defence system is launched to intercept a rocket launched from the Gaza Strip, above the southern Israeli city of Ashdod, on May 17, 2021. Photo by AHMAD GHARABLI/AFP via Getty Images.

During May 2021, increasing tension between Israel and Hamas raised the issue of the ongoing armed struggle between them. A country with a solid defense industry and military capacity like Israel struggles to stand firm and unharmed against a small-scale military organization like Hamas or Islamic Jihad. What causes this vulnerability, even with an asymmetrical non-state actor as the belligerent? The answer to this question lies in Hamas’s and, indirectly, Hezbollah’s powerful rocket and missile inventory.

The military operations in Syria and Lebanon enabled Hezbollah to develop a substantial inventory of rockets with varying radiuses from 70 mm to 300+ mm. Today, it can be observed that Hezbollah’s rockets or the local productions created by smuggling critical parts such as warheads, fuses, aiming pods, etc. are frequently used against Israel. One aspect of the Hezbollah attacks against Israel runs through the Al-Qassam Brigades and Hamas.

These rockets and attack missiles are military elements that weigh 45-750 kg in total and carry a warhead in the 10-150 kg interval, often without a stand-off guidance system. These types of missiles generally have a circular error margin of 5 m. Their primary operational capacity is to provide fire advantage/superiority in attacks against locations determined by other elements, harass the rival ground forces, and gain maneuver space for subsequent operations.

What are the measures Israel has developed against these missiles? It has developed the Iron Dome, a low-altitude ballistic missile defense system, which is unique in the world. Moreover, the THEL laser protection system, a high-energy laser technology developed in recent years, has been actively used against guided missiles. The main reason for the search for alternative protection is the cost of deterring rockets by Hamas by using Iron Dome missiles to destroy them.

The Tactical High-Energy Laser (THEL) system has the potential to affect the course of this conflict in the next decade significantly, considering that the cost per laser shot is less than $5,000. However, considering the current balance, Hamas and Islamic Jihad have proven many times that they can attack Israel with nearly 200 missiles and rockets within one hour.

As of today, it is thought that there are more than 40 Iron Dome batteries in Israel’s hands. Considering that there are 3 or 4 launchers in each battery and 20 Tamir missiles in each launcher, Israel has the capacity to defend itself against 800 low-altitude rockets and missiles. However, a number of batteries can be saturated through intensified attacks from specific directions instead of reaching full saturation.

Read: Say This, Don’t Say That: Time to Confront the Misleading Language on Palestine, Israel

Since the batteries are distributed over various locations and can only protect an area of ​​maximum 60 square kilometers, when one defense line is under intense rocket and missile fire, it can no longer defend the territory. This is the offensive-defensive strategy of Hamas and Islamic Jihad, which have a minimal inventory in numerical terms. Its effectiveness can be seen in the fact that Israel cannot prevent the permeation of its airspace and land, which is protected through many layers of defense systems.

Missile defense is not limited to air defense systems. The military satellites that are in orbit continuously search for preparations of an attack to thwart it before it even begins. The Israeli Air Force executes these operations with the help of ground forces and satellite images for precision. The big picture presents a state army with eyes on the atmospheric level and missiles with great precision, and yet Israeli land is not secure from the missiles with a radius of less than 100 km.

Most of the rockets and missiles that Hamas and Islamic Jihad can smuggle and use are without any stand-off guidance system, which means the missile can only explode without any destination guidance regarding a destination. This is functional if the only goal is to harass the enemy forces and deprive them of a sense of security. The only promising technology for the Israeli side is THEL, with its ability to thwart threats with low cost and a higher level of precision.

Therefore, Hamas and Islamic Jihad will be forced to invent alternative ways other than relying on the suppressive missile attacks as a military tactic as it becomes ever more challenging for asymmetric forces to continue the struggle as states become more experienced in non-state conflict.

The next decade will burden non-state armed actors like Hamas, Islamic Jihad, and Hezbollah with higher costs for security, education, logistics, and fewer opportunities actually to harm the targeted army.

States are organic entities that learn from experience. This is the main advantage of any state that is struggling with a non-state armed actor. From its foundation, Israel has been in conflict with several actors attacking it with an array of military tactics. What might seem like a superiority for the non-state groups today, may enable the targeted state to gain experience and learn to defend itself.

This process is the locomotive behind all military inventions which have imposed changes in the battlefield. Thus, Hamas and Islamic Jihad are bound to keep looking for weak points, and seek out and discover alternative methods and tactics to survive against a very superior military organization.

The technological edge, which usually defines the entire narrative in a military struggle, is always going to be enjoyed by states. This asymmetry offers states a tactical superiority, but at the same time makes them vulnerable due to a higher reliability on energy sources and raw material.

Non-state armed actors improvise based on available sources, usually find a loophole, and continue posing a certain level of risk to the target state. What is essential in this cycle is to update the information, intelligence, and technology used as frequently as possible.