Some of the highest numbers of foreign fighters joining Daesh came from the Balkans, and these states now face the huge challenges of dealing with returned fighters and their families. 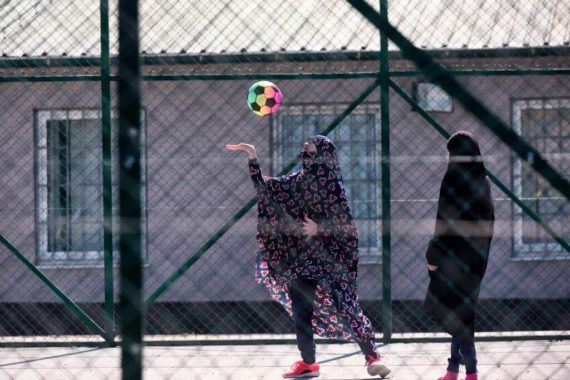 Kosovar children returned from Syria play in the compound of the foreign detention center in the village of Vranidoll on April 21, 2019. (Getty Images)

Seven years ago when the civil war erupted in Syria, the Balkans considered itself far away from the war zone. However, when Daesh (ISIS) gained prominence in early 2014 and emerged as an influential non-state actor across eastern Syria and northwestern Iraq, the terror group began recruiting fighters quickly, and the Balkans became a region with some of the highest numbers of foreign fighters joining Daesh’s ranks.

Studies conducted at research centers based in western Balkan countries such as Albania, Kosovo, North Macedonia and Bosnia and Herzegovina have shown that people, who joined the Daesh terror group often lack education, are members of marginalized groups with extremist ideologies, and experience poor emotional and economic situations. Most importantly is the lack of access to correct knowledge about their faith which causes vulnerable young people to be influenced by propaganda from various groups.

In the Balkans, the largest number of fighters joining Daesh came from Kosovo, Albania and Bosnia and Herzegovina, and to a lesser extent from Serbia, Montenegro and Northern Macedonia. According to the Extremism Research Forum-Albania Report, 144 people joined extremist groups in 2013. The Ministry of Interior and the Albanian National CVE Coordinator reported that the number of Daesh fighters from Albania dropped to 0 in 2015. This was the result of Albania’s 2014 Penal Code amendments criminalizing participation in, and recruitment of, citizens to engage in armed conflicts abroad.

According to a European Commission report on Albania, 45 individuals have returned from Syria while 26 are believed to have died, 73 individuals remain in Syria. Before Turkey’s Operation Peace Spring, last month, around 50 children from Albania were living for months in Syrian camps. Turkey’s ambassador to Tirana, Murat Ahmet Yoruk, said last month in a press conference that the repatriation of Daesh fighters including children and women from Syria was a priority. Yoruk said that Turkey was exchanging information with the Albanian government but did not give any more details about when a repatriation effort might be expected.

The Extremism Research Forum– Kosovo report noted that 400 people have travelled from Kosovo to Syria or Iraq between 2012 and 2017. One third have already returned to Kosovo. Country Reports for terrorism by the U.S Department of State in 2018 shows that 74 of them are deceased. 133 of these individuals have returned while approximately 196 remain in conflict zone, which includes 40 children who were born in the conflict zone to Kosovo citizens. Generally, the age of fighters from Kosovo varies from 21 and 30.

Currently trials and investigations are continuing in Kosovo for 52 suspects and 21 cases. What is important to emphasize is that the prosecutors lack experience in these kinds of cases which Kosovo has never faced before. In April 2019 , according to the New York Times, the Justice Minister of Kosovo Ablerad Tahiri told journalist that “a planned operation to bring back some of our citizens from Syria ended successfully.” Among the group were four men suspected of being Daesh fighters who were arrested, 32 women and 74 children. Nine of these children had lost parents during the fighting in Syria. The justice minister claimed that these women and children are victims and deserve to reintegrate in the society. Meanwhile the number of Kosovo fighters that remain in Syria is around 90, and it is still not clear if any operation will be organized for their return.

As a country with different ethnic groups – Macedonians, Albanians, Turks and Albanians from North Macedonia were the largest group to join Daesh. Taking in consideration the political situation between Albanians and Macedonians, often threats of violent extremism is misused by political elites. According to a research report by Regional Cooperation Group (RCG) a good example is the “Montra Case” where in 2012, “five ethnic North Macedonians were killed under (still) unclear circumstances”. The Interior Minister of North Macedonia said at the time that it was a ‘horrific assassination that was perpetrated by followers of radical Islam’ however, no relevant evidence was provided to confirm this.

The RCG report also stated that there were two large law-enforcement operations known as “Cell 1” and “Cell 2” in August 2015 in which 14 individuals were arrested under suspicion of conducting recruitment, financing or facilitating the travels of foreign fighters from North Macedonia to Syria and Iraq. To prevent radicalization the new government of North Macedonia introduced two strategies in March 2018 – the “Prevention of Violent Extremism” and an updated “Strategy on Countering Terrorism”.

Bosnia and Herzegovina historically been known to be a magnet when it comes to attracting foreign fighters. Bosnia’s State Investigations and Protection Agency reports show that between 2012 and 2016 around 200 men and 70 Bosnian women and a total of around 60 children travelled to Syria and Iraq. As the country made an effort to enforce laws in order to prevent recruitment, the number of individuals going to Syria fell sharply in 2016. In March 2019, two people were supposed to be repatriated to Bosnia with one successfully returned. Currently, Bosnian authorities are expecting to repatriate nine people, while 120 are still imprisoned in Northern Syria with repatriation procedures in process. In 2017, 46 people were reported by the Ministry of Justice.

The biggest challenge facing Bosnia right now alongside other Western Balkans countries is the treatment of returnees. In an Interview with the Balkan Investigative Reporting Network (BIRN) The Bosnian Security Minister Dragan Mektic said that “they will be treated according to our laws and the evidence we have and which is given to us by our partner countries. We are part of the global coalition for the battle against ISIS since the very beginning, we have been part of that process for a long time and we will fulfil all our obligations from our participation in that coalition”.

While civil society groups argue that women and children are victims, academics argue that even women should be investigated and prosecuted on a case-by-case basis as was done in Kosovo. However, Bosnian officials argue that extremism will still continue to be a threat for the country. What has raised the issue even more is a statement by the French President Emmanuel Macron in an interview for The Economist calling Bosnia a “ticking time-bomb” claiming that the country contains a danger from returning jihadists. However, this declaration was criticized by Bosnian officials and Islamic Community in Bosnia since according to them they are doing the best to deal with this issue, albeit being a huge challenge.

Serbia has one of the smallest numbers of Daesh fighters from the Balkans. According to the Interior Ministry of Serbia, 49 individuals joined the so-called Islamic State and most of them were from Novi Pazar, a city with Muslim majority in Serbia. The BIRN investigations show that there are 20 Serbian women in Syrian camps and until now Serbian authorities have not taken any measures to bring them home. The only politician that has spoken out about this issue is Muamer Zukorlic, a leader of a small Bosniak party and an MP in the Serbian parliament. He stressed that the state must do more, especially when it comes to saving the children. However, according to the US State Department Report the level of Daesh recruitments activities in Serbia are low.

When the influx of Daesh recruits began in 2012 and in the following years, the situation in Montenegro caused this issue become highly politicized so that even though the number of fighters was small compared to other Western Balkan countries, in 2015 the state responded by developing a Countering Violent Extremism Strategy. Balkan Insight writes that according to the latest European Commission report on Montenegro, 23 individuals went to Syria among them five women and three children. Out of that number six have reportedly died, while 10 returned to Montenegro. The first case to be persecuted by High court of Podgorica was in 2015 with the trial still ongoing.

What made the issue of Daesh recruitments in the Balkans, especially in Kosovo and Albania, all the more sensitive was when in April 2019, The New York Times broadcast video footage showing camps in Syria holding relatives of Daesh fighters. In the video, viewers could clearly hear voices speaking in Albanian saying “Oj Sare!” (Hey Sara!) “Ku eshte Sara?” (Where is Sarah?) Public reaction was immediate, prompting both the Kosovo and Albanian governments to take steps to return their citizens. Kosovo has the highest number of returnees and it seems to be the most successful country in the Balkans in terms of repatriating its citizens, however this all happened with the help of the United States.

Currently, Balkans countries especially Kosovo and Bosnia and Herzegovina are facing major challenges on how to deal with returnees. National and international organizations are conducting different training programs for psychologists as well as sociologists. The Balkans as a poorer region of Europe lacks expertise and often seeks help from the EU on dealing with cases.

Other neighboring states of Bulgaria, Romania and Croatia, do not have a high number of individuals who have gone to fight in Syria. In Bulgaria, some members of the Roma community include a Muslim majority were accused of recruiting individuals to go to Syria but there is no exact number. Croatians were shocked when in 2015 a Croatian citizen who joined Daesh was said to have been killed in Syria. These countries are usually used as transit routes for terrorists from Europe to Syria and Iraq. As part of the EU, they enforced laws and strategies according to EU requests.

Unlike other Western states who have often publicly refused to accept the repatriation of their foreign fighters, Balkan states have shown leadership by taking responsibility for their citizens, especially women and children. However, despite statements by some Balkan representatives that returnees are unlikely to pose a public risk, the long term issues that may arise with the return of battle-hardened fighters still remains of utmost concern. For now, many Balkan states face the challenging process of integrating returnees, an unfamiliar situation which will require thoughtful responses.