The spread of nuclear technology, global warming, and ecology challenges are more important than personal animosity and macho responses. 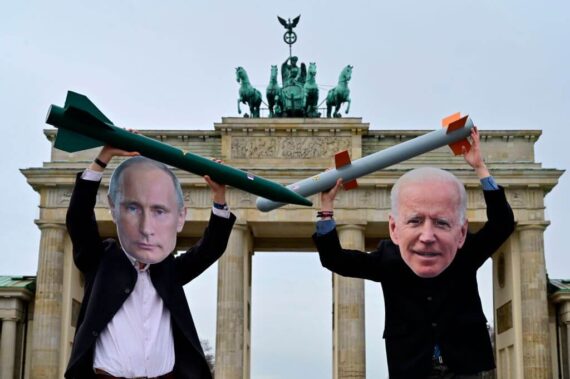 Peace activists wearing masks of Russian President Vladimir Putin (L) and newly elected US President Joe Biden pose with mock nuclear missiles in front of Berlin's landmark the Brandenburg Gate on January 29, 2021 in an action to call for more progress in nuclear disarmament. Photo by JOHN MACDOUGALL/AFP via Getty Images.

The recent exchange of verbal barbs between Vladimir Putin and Joe Biden has sparked a debate across politicians and media experts, many of whom have predicted an inevitable shutdown of the Russia-U.S. relations. But as the tension between the countries escalates, both leaders seem to be stalling for time before the dramatic showdown.

After Biden’s affirmative answer to the question of whether he thought Putin was a killer by the anchor of the morning television program Good Morning America, the Russian president did not keep Washington waiting for feedback and responded in a typical sarcastic and icy fashion, saying, “It takes one to know one” and wishing Biden good health.

Biden’s strong statement was a flashback to the Bill O’Reilly remark when he called Putin a killer during an interview with Donald Trump back in 2017. However, at that time, Trump has said, “There are a lot of killers. We have a lot of killers.” Thus, Trump pointed not directly at Putin, but rather at the U.S. foreign policy. Yet, Biden, unlike Trump, clearly meant that Washington’s intention is to end any ties with Russia. It was a well-planned gesture aimed at showing the current U.S. administration’s attitude towards the Kremlin.

Philip Butler, an American geopolitical journalist and author of the book Putin’s Praetorians, an Amazon bestseller, states, “It’s clear to everyone familiar with geopolitics that the Biden presidency will be a continuation of Obama-level anti-Russia policy. Only the Western order is more desperate now than before.” He adds, “And for the current U.S. establishment, Russia is the foe to be vanquished.”

Indeed, in the eyes of the White House, Russia is a weak link in the global economic chain that poses neither a threat nor real economic and trade competition for the United States. But as Russia still dominates the post-Soviet space, borders with China (the top U.S. economic competitor), and spreads over a huge territory that has grown even further after the annexation of Crimea, Washington seems to have no quick and efficient strategy to extract Moscow – a painful eyesore in the U.S. hegemonic strategy – from the global players list.

In fact, the United States’ top goal today is to overcome China’s economic rise. The focus of Washington’s trade competition has switched from Moscow to Beijing. According to the World Bank, China’s economy amounted to $22.5 trillion in 2019, putting the United States in second place ($20.5 trillion), and the European Union in third ($19.9 trillion). From heavy equipment industry to high-tech innovations, China’s share of the global market is growing faster than that of the United States.

Meanwhile, Russia is aware that it is no longer a rising nation. Its economic institutions have proven to be weak despite the Kremlin’s global ambitions. The only way for it to keep the power balance with the U.S. now is to strengthen its ties with Asia.

Russia’s rapid turn to the East

According to Andrey Rusakov, director of the Center of European and Asian Studies at the Ural State University of Economics in Russia, this will result in Russia’s rapid turn to the East and its further economic and political integration with China. For instance, by 2024, Russia-China trade is set to double and reach $200 billion while at the end of the last year the defense ministers of the two countries extended a ballistic-missile agreement.

Read: The Arrest of Alexey Navalny: Who in Russia Is Afraid of the Kremlin Critic?

It’s true that Moscow remains an enduring military power, which is why it continues to be an important player in the global political arena and a major factor in U.S. strategy. According to a report by the Stockholm International Peace Research Institute, based on market exchange rates, Russia’s military spending increased to $65 billion in 2019. However, when it comes to comparing defense spending across countries, the method based on the use of purchasing power parity (PPP) exchange rates claims to be more methodologically robust and objective.

PPP exchange rates show that in 2015-2020 Russia’s military spending ranged annually between $150 billion and $180 billion, overcoming China’s spending. While the U.S. economic leadership is absolute and notwithstanding Moscow’s heavy investments in war-torn zones across the Middle East and North Africa, which are often of strategic interest to the U.S., Russia still manages to significantly counterbalance Washington.

Trying to imagine the future scenarios of the Putin-Biden diplomatic relations, one can have no expectations that Russia will take a step towards the U.S. There are two main reasons for this. The first is the surging demonization by Washington of every Russian move.

“Vilification of Russia has become a U.S. brand identity that results in sanctions and accusations against Moscow as well as concrete political decisions up to the allocation of funds to fight the ‘Russian threat.’ All this is reminiscent of the Cold War style of the USSR-USA era. Strong confrontation on many international issues like Ukraine, Syria, the Nord Stream as well as Russian internal policy (the Navalny case) is again on the agenda today,” summarizes Rusakov.

In this scenario, the Kremlin’s position will remain uncompromising for as long as possible as Russia keeps stressing its position of non-interference in other countries’ affairs and, thus, will not tolerate such an approach by others.

The second reason why the U.S.-Russia relations are deadlocked lies in Putin’s ego and proud character, which often outweighs common sense. In this regard, Russia should take the example of its Chinese partner and friend Xi Jinping who, despite his ambitions of global economic leadership, gets along with almost all world leaders.

Obviously, the ever-continuing love-hate relationship between Russia and the U.S. will persist. Biden’s hostile tone dispelled any myths of a possible thawing of U.S.-Russia diplomatic ties. However, once relations reach a tipping point, the outcome might be much more dramatic than one can imagine. At the end of the day, the spread of nuclear technology, global warming, and ecology challenges are more important than personal animosity and macho responses.