Fashion has the power to turn worn out pieces into highly demanded top trends with only a few small touchups, then, why does it not do the same for racism? 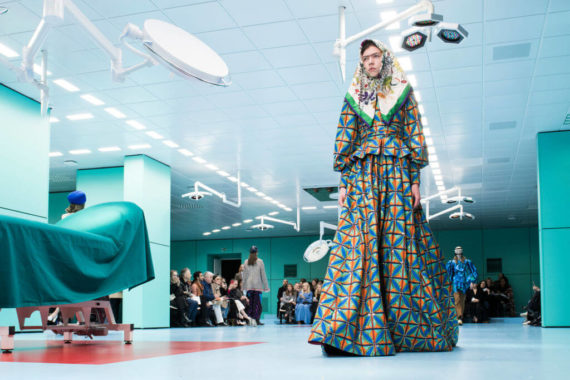 A model walks the runway at the Gucci show during Milan Fashion Week Fall/Winter 2018/19 on February 21, 2018 in Milan, Italy. Getty Images

Racism lingers in the West. While conventional racism has preserved itself, other variations have also appeared on the scene. Aside from white supremacist racism, popular political discourse has created new forms of racism and there have been some attempts to institutionalize racism through laws. Although its visibility has declined in the aftermath of World War II, racism is on the rise again in both overt and covert ways.

We have been witnessing the most current form of it within measures taken against refugees and foreigners. Unfortunately, such measures have turned into ordinary practices of today’s world. The same applies for legal regulations based on racism and lifestyle debates revolving around Muslims. New forms of racism are likely to emerge with the creativity of elite intellectuals according to current needs.

The fashion industry and giant brands have also been affected from this situation. Since one of the missions of fashion is to break new ground, then why don’t fashion brands spearhead some ideas when conditions are suitable? Since fashion has the power to turn worn out pieces into highly demanded top trends with only a few small touchups, why does it not do the same for racism?

A racist message in fashion might cause serious financial damages, since everyone is a potential customer. However, despite this, two fashion giants, Prada and Gucci, launched two products one after the other, which were offensive against black people.

One can argue that a racist message in fashion might cause serious financial damages, since everyone is a potential customer in the global order. However, despite this, two fashion giants – they either could not refrain themselves or internalized racism to such an extent that they were unaware of what they were doing – namely Prada and Gucci, launched two similar products one after the other, which were offensive against black people.

In December last year, Prada used a blackface design, which denigrates black people. In his accessory line named “Pradamalia,” Prada placed $550 worth monkey figurines on the windows of its stores in New York, which bared resemblance to the “blackface” imagery, using these figurines on trinkets and t-shirts. The first response to Prada came from a lawyer named Chinyere Ezie, who shared this post on Facebook: “I don’t make a lot of public posts, but right now I’m shaking with anger. Today after returning to NYC after a very emotional visit to the Smithsonian National Museum of African American History and Culture including an exhibit on blackface, I walked past Prada’s Soho storefront only to be confronted with the very same racist and denigrating blackface imagery.”

Prada trinkets that caused an outcry and were eventually withdrawn by the brand.

This message of Ezie, shared with the hashtags ‘#EndRacism’ and ‘#BoycottPrada,’ received thousands of support comments and was shared by tens of thousands. Withdrawing the characters from circulation upon the outcry, the Prada Group issued a statement that read: “Prada Group abhors racist imagery. The Pradamalia are fantasy charms composed of elements of the Prada oeuvre. They are imaginary creatures not intended to have any reference to the real world and certainly not blackface.”

In spite of this scandal that spread to all corners of the world through media and social media, last week Gucci launched a product that is again inspired by blackface: a black turtleneck sweater that pulls up over the bottom half of the face with a cut out and oversized red lips around the mouth.

Gucci removed this balaclava top from its line after being accused of resembling blackface.

Having to discontinue the sweater and apologize for its sales upon the reactions, Gucci stated that they would draw a lesson from the incident. In November last year, a social media campaign film for Dolce & Gabbana screened in China presented some racist and offensive images. The brand had to call off its fashion show in Shanghai, and some models have decided not to walk for the brand’s shows.

Having issued a statement just like the others, D&G said: “We have only respect for China and the Chinese people.” However, another scandal followed. A social media comment seeming to be written by Stefano Gabbana with offensive discourse against China was also revealed. Gabbana stated that his Instagram account was allegedly hacked, but screenshots shared on social media showed Gabbana’s comment, “China Ignorant Dirty Smelling Mafia.”

Similar messages are given in lines of many brands, including Mango’s “slave style” jewelry and Massimo Dutti’s colonial lux menswear collection, which glorifies men. The messages contain a sense of nostalgia for the colonial period, caricaturize a serious issue like slavery, and denigrate people of color. In January last year, H&M used a black child to model a sweatshirt sporting the phrase “coolest monkey in the jungle.” Upon this, New York Times columnist Charles M. Blow asked H&M on social media: “Have you lost your damned minds?”

Racism is on the rise and even banalized! As Georg Simmel says, aside from its practical benefits such as keeping warm, clothing is also a means of communication and acts almost like an identity card.

Since all of these brands cannot have possibly lost their minds concurrently, it can be contended that racism is again on the rise and becoming banalized! As Georg Simmel says, aside from its practical benefits such as keeping warm, clothing is also a means of communication and acts almost like an identity card.

Katy Perry Collection – the fashion line by the pop star – has been the latest to adverse in a blackface scandal, causing the company to withdraw shoes from their line.

Also Read
The Great Climate Upheaval: One Billion People are Expected to Migrate by 2050