With the artificial intelligence, warfare is entering a new phase and becoming smarter, faster, stronger, and more autonomous. Here are five books that explain how this transformation takes place. 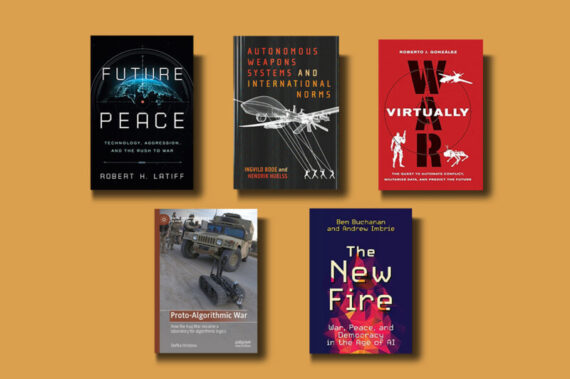 Robert H. Latiff’s Future Peace, a sequel to Future War, specifically brings to attention a subtle, yet potentially destructive effect of technologies such as autonomous systems, advanced weapons, and AI: the provocation to violence. Against the backdrop of the brewing power rivalry between the U.S. and its adversaries, technology aggregates tension and catalyzes violence.

Future Peace touches upon the ethical, security-related, behavioral, and technical aspects of technology and warfare. It consists of four chapters: “A Giant Armed Nervous System” (referring to the military), “Urge to Violence,” “Stumbling into War,” and “Avoiding War.”

Latiff’s book comes as a warning to practice caution when adopting new weapons technology, and aids in understanding human and technical behaviors to attenuate its harms and decrease the chances of war. Not only does technology make war easier and speedier, hence enabling the rush to war, but hinders human reasoning. Such technical changes make the process of sound judgement difficult; for example, thinking and acting in a diplomatic manner. Furthermore, these changes enhance the potential for human error to get out of hand.

Latiff argues that it is vitally important to avoid entering conflict in the first place. He highlights the importance of the cooperative efforts of many segments of society, from the public and technologists to militarists and decision-makers. He implies that it is criminal negligence to leave everything to automation processes or politicians. Therefore, Future Peace also lays out long to short term recommendations to maintain peace and reverse the rush to war.

utonomous features are not a matter of the future; they have been used in warfare for years. However, it is quite evident that with the advancement of technology and the weaponization of artificial intelligence, autonomous weapons systems are swiftly adapting and becoming accepted.

As these changes emerge, the question that is often raised by international organizations such as the UN, which set the norms of conduct in an effort to control and regulate the use of autonomous weapons, is “How will human beings maintain control of the use of autonomous weapons?” In their study, Ingvild Bode and Hendrik Huelss flip the script to reveal another perspective of this dynamic.

Bode and Huelss aim to explain how testing, developing, and using weapons systems with autonomous features shapes ethical and legal norms, and how standards manifest and change in practice. The authors also examine the consequences of autonomous weapons for international relations.

Bode and Huelss acknowledge the fear and risks that these developments bring but adopt the approach that autonomous weapon systems may push people away from taking immediate decisions on the use of force as norms adapt to the appropriate use of force.

As the trend and debate of autonomizing weapons systems continues, Autonomous Weapon Systems and International Norms equips the reader with an understanding of the relation of human-machine interaction and the process of integrating new technologies into war.

n War Virtually, Roberto J. González takes the reader behind the scenes to expose how scientists, programmers, and engineers developed technologies that automate war, predict conflict, and regulate human thought and behavior. Does this sound utopian? Not so when you factor in the persistent drive to arm for virtual warfare. In this quest, data comes a valuable commodity.

González evaluates autonomous weapons, robotic systems, predictive modeling software, advanced surveillance programs, and psyops techniques. He examines the foundation of the latest version of warfare in order to explain how it has taken its current form through contemporary military operations and their high-tech and cultural underpinnings.

However, War Virtually transcends the design, innovative, and transformative aspects of technology and warfare, and touches upon human engineering. González reveals the relations between U.S. intelligence agencies and Big Tech, and its implications. It is no secret that algorithms construct behavioral models for anticipating or even predicting human behavior, and, therefore, all of us risk having our digital lives become part of the military-industrial economy.

Adopting a critical approach, González examines how the U.S. military is weaponizing technology and data for new kinds of warfare, and questions the notion that technological advancements will lead to more efficient and less destructive warfare. In fact, he implies that such an aspiration comes at a great cost, and argues that in this world, there is little room for hubris.

War Virtually covers a large array of topics including automated battlefield robotics, social scientists’ involvement in experimental defense research, the blurred line between political consulting and propaganda in the internet era, and the military’s use of big data to craft new counterinsurgency methods based on predicting conflict.

Read: The Trillion Dollar Silencer: Why There Is So Little Anti-War Protest in the United States

n Proto-Algorithmic War, Stefka Hristova offers a unique perspective on the Iraq War and the history of algorithmic and digital logic that came to be a crucial element of today’s warfare. She examines the military policy of the United States going into the Iraq War: the U.S. approached the war with the logic of digital and emerging algorithmic technology alongside the preceding numerical logics of the British Mandate in Iraq. In a sense, the Iraq War became an experiment in the early stages of development and utilization of such technology in warfare, and moreover war culture.

Hristova provides a case study of a comparative historical framework reaching back to the quantification techniques harnessed during the era of Mandatory Iraq (1918-1932) and analyzes the parallels and diversions between the numerical logics in both cases.

The author further evaluates the logic that moved beyond the British mandate for Iraq and reduced culture, society, and the physical body and environment into visual data-driven, sterilized, reproducible warfare, highlighting that it lacked cultural and historical context. Indeed, the actual experience of the Iraq War resulted in massive-scale death and destruction.

Proto-Algorithmic War offers an insight into the digitization and automation of war. Hristova aptly scrutinizes the ways in which the Iraq War attempted and often failed to see and incorporate population and territory as digital and further proto-algorithmic entities.

The New Fire: War, Peace, and Democracy in the Age of AI by Ben Buchanan and Andrew Imbrie (MIT Press, 2022) Book cover

en Buchanan and Andrew Imbrie use fire as an analogy to showcase how AI has a dual nature: destructive and constructive. Just like our distant ancestors learning to operate their newly discovered, full of potential tool, our responsibility is to understand and use AI potential wisely. With AI revolutionizing the world, democracies have a responsibility to harness that power constructively and come out on top. Transformation is on its way—can humanity use AI to light the way? Or will the fire burn wildly and ignite a new type of war?

In The New Fire, Buchanan and Imbrie help us understand AI better by breaking it down into its “sparks,” which are data, algorithms, and computing power. They further explain the tangible and potentially destructive consequences of these sparks such as disinformation campaigns, new hacking tools, and military weapons.

On a larger scale, The New Fire shows the urgency of democracies to adapt to the powerful tool that is AI, as autocrats may use it for domestic centralized control and asymmetric advantages in combat. In that sense, they argue that harnessing the power of AI is crucial for holding democracy in balance in the world. The New Fire also acknowledges that democracies have a harder time adapting to the age of AI given ethical and civil concerns, but that new ways could be forged based on the advantages of democracy.

Drawing on examples from geopolitical competition and its analysis, Buchanan and Imbrie show how AI can work for democracy while respecting civil rights. In the age of AI, this crucial topic may determine the choice of course between war and peace.