Trump may well like Boris as he sees his pathological lying and lack of political dynamism as qualities he warms to, but in reality we should not expect anything other than drama, misunderstandings and more childish outbursts. 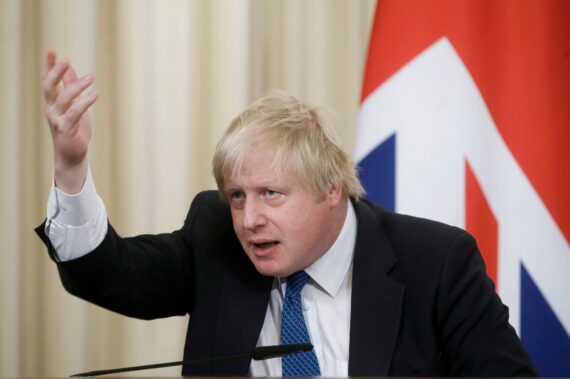 Former British Secretary of State for Foreign and Commonwealth Affairs Boris Johnson speaks during a press conference with Russian Foreign Minister Sergei Lavrov (not seen) in Moscow, Russia, on December 22, 2017.

If we are to see the ‘special relationship’ between the U.S. and the UK at face value – very much a myth at the best of times wheeled out and dusted down and used on rare occasions by both sides like an old piece of machinery which still has its uses – then, the debacle which we have witnessed with the British ambassador can and should be seen in a similar light.

When the leaked cables of Sir Kim Darroch became public leaked to a British tabloid, many pundits drew breath and saw the pernicious comments about Trump as potentially very damaging, given the timing of a new Tory leader entering office and Brexit being such a herculean topic which the new PM needs to tackle.

The common belief is that Trump’s relationship with a new PM, likely to be Boris who is his preferred candidate, will be paramount to helping Britain ride the storm of a hard Brexit. If only the premise of that assumption – the UK and the U.S. could pull off a new trade deal quickly – were even remotely true, then perhaps there could be some gravitus in this notion.

But we’re talking about Trump here managing to get through a month, let alone a couple of years, with Boris Johnson without a clash and falling out and for both sides to have common ground on what that trade deal could look like. It’s not just that Boris is so weak (as he proved when he failed to throw his weight behind the U.S. ambassador’s resignation), but more that he will have to pull off two minor miracles to secure such a deal with the Trump administration; one, he will have to play an absurdly submissive role to Trump personally; and two, he will have to face Trump head on, on two nuggets of the deal which Trump has already signaled he is eyeing.

The thing about Trump is that he’s a lousy negotiator and only wants talks to start with America being dominant, dictating terms and then allowing the other side to decide how they are going to get out of the mess they’re in. Trump is also not interested in the nuts and bolts of a trade deal with the UK but the sweeteners which come, when the screws are turned. In Britain, this would mean allowing U.S. companies to clean up with a part privatization of the health service and to fill British supermarkets with U.S. foods pumped with hormones. I have long argued since Trump’s first visit to the UK, that he wants a hard Brexit – but not because he believes, like his biggest British sycophant Nigel Farage that a no-deal Brexit will put the UK in a stronger position to negotiate a better trade deal with the EU, but rather because he and his cronies want to clean up by buying up firms for a song in a post Brexit Britain.

The common belief is that Trump’s relationship with a new British PM, likely to be Boris who is his preferred candidate, will be paramount to helping Britain ride the storm of a hard Brexit.

We need to wise up about Trump. And this is really the question now with Boris after Sir Kim’s resignation. What will Boris learn from the triumph of insecurity which Trump’s tweets revealed? We would hope that he will learn that Trump’s idea of a special relationship is one where Boris lies on his back and Trump violates him. And we should also dismiss this idea of honor amongst thieves and that Boris and Trump are both cut from the same cloth, so will probably get along and this can only be in the UK’s interests, with regards to a quick trade deal and using Washington to soften up Brussels. If Boris has learnt nothing from being Foreign Secretary and observing Trump, he should have noted how Trump doesn’t respond even in the slightest to sycophancy.

Theresa May is still licking her wounds after he pushed the knife into her when she supported Sir Kim. But May bent over backwards and did everything to help Trump, moving heaven and earth to get him to come to the UK on two occasions – the second one with his entire family which will no doubt help his re-election. She spoke up for him at every possible opportunity. No matter. Trump only takes and gives nothing back and is sure to betray even his supporters at some point – which is part of the identity of a failed businessman who has lost most of his family fortune and has to have a book published which promotes a fantasy that he is a great negotiator and a formidable businessman. To break the blade in Theresa May’s back, probably his greatest friend in Europe and one who was most able to promote him there, was pure Trump. Rank stupidity only matched by gross treachery on a whole new level.

What we are likely to see with Trump and Boris is a lot of tantrums and misunderstandings. And for this reason alone, he may well take the wise decision to give Nigel Farage the job of U.S. ambassador in Washington, for no other reason than Farage is going to be the one who becomes the mediator in these clashes anyway, so why not send him to Washington where can serve Trump well, after the U.S. president made Farage so wealthy by arranging his Fox contract there.

If Boris has learnt nothing from being Foreign Secretary and observing Trump, he should have noted how Trump doesn’t respond even in the slightest to sycophancy.

The problem for Boris is that the very thing he needs – power and leverage – to work with Trump, is lacking, unless he turns to yet another myth about the special relationship, which is that UK, at one point in history, did America’s diplomacy around the world and cleared the path for the Washington machine to engage with countries that normally were off limits. Trump only respects those who have power over him, like Kim, Xi and Putin. He’s an absolutely hopeless negotiator and understands nothing about international politics or trade, which is partly why he is about to start a new ‘war’ with Turkey over the S-400 deal with Moscow.

For this reason, Johnson’s choice of foreign minister – and we could argue also its ambassador to replace Sir Kim – are both critical. The leverage that UK could offer is to take a bigger role in resolving Iran (which Trump badly needs to do), a more dynamic role in the Middle East (which the UK could easily do as it knows the ground) and even helping with the peace process with the Taliban in Afghanistan.

But it might be too late. What we know now is that Trump withdrew from the Iran deal simply for personal, petulant reasons as he wanted to spoil Obama’s one main foreign policy decision. This is the real take-way from the Sir Kim cables. His earlier comments about Trump’s administration being “inept” seems opaque and insignificant almost like an American tourist complaining about British weather, compared to Boris’s previous insults about Trump, when he was foreign minister.

The real question for the ‘special relationship’ now and how the Boris-Donald relationship going to pan out will be more based on Trump’s craven style of exploitation in everything he does. It may well be that post October 31, when Boris is negotiating with the EU for a better Brexit deal and the pressure reaches fever pitch, he may well find Trump pretending to offer help to him. But at a very high price.

The resignation of Sir Kim is irrelevant as Trump is a big fan of the new world order of diplomacy being dead and diplomats having almost no real role in negotiating anything or resolving disputes. The fiasco also shows how journalism is also almost dead as not so long ago newspaper editors stood by their own signatures on the UK’s ‘official secrets act’ and would not publish the leaked cables anyway. If the British public has the right to read them, then surely is also has the right to know who leaked them in these polarised political times.

What Trump has done by the Sir Kim move is show quite clearly what it expects from the UK and what he is prepared to do to get Boris to play the role of servile ally. The chances of a UK-U.S. trade deal coming even in Trump’s second term are even more unlikely than Boris pulling off a hard Brexit as Britain struggles to define itself in the world and Trump continues to blunder and stumble on the foreign policy circuit. Trump may well like Boris as he sees his pathological lying and lack of political dynamism as qualities he warms to, but in reality we should not expect anything other than drama, misunderstandings and more childish outbursts.

Also Read
US-Iran Tensions: Trump Seeks a Deal of His Own