Calls to Reform the UN Security Council Are Getting Louder

Closely allied countries such as Germany and Turkey should continue to stress their requests and perspectives on the UN reform, despite basic differences and expectations in how it should be done. 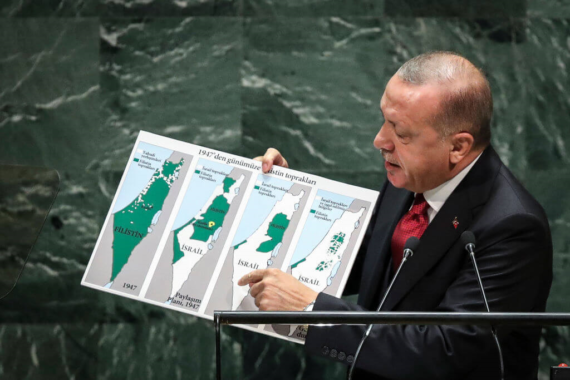 President of Turkey Recep Tayyip Erdogan holds up a map of Israel since 1947 showing changing population of territory under Israeli rule while speaking to the United Nations General Assembly at UN headquarters on September 24, 2019 in New York City. Getty Images

The 74th session of the United Nations General Assembly opened on September 17, 2019 and will continue until the 30th. Following the first day of the high-level General Debate held on Tuesday, the 24th September 2019, some other high-level events have also started to take place in New York.

Without going into much detail of this years’ specific events, it is no doubt valid to elaborate upon the increasing loss of the UN’s global effectiveness and its purpose. As pointed out by some, the UN is losing its already limited global influence, in particular after the U.S. circumvented the global institution in order to conduct its war on Iraq in 2003.

Nevertheless, the gathering of the annual general assembly once again raises the long debated call for a reform of the United Nations Security Council, the UN’s most important organ.

The Security Council is charged with ensuring international peace and security, although this is hindered due to its complicated formation, the disagreements among its members, which consists of five permanent and ten non-permanent members, as well as the general lack of willingness particularly by the so-called “great powers” to fulfil their duties in a manner consistent with the demands of the General Assembly.

For approximately twenty-five years, an increasing number of countries such as Germany, Japan, South Africa, Canada, Brazil and Turkey, have insisted on a reform of the Security Council. Several movements were established for this, some called for the expansion of the permanent seats such as the G4 nations of which Germany and Japan are members. While the “Uniting for Consensus” (UfC) movement, of which countries such as Italy, Spain, Argentina and Turkey are members, oppose the call to expand the Security Council with new permanent seats, and instead suggest a principle of rotation for the Council’s membership and a rejection of the “veto” privilege of certain states.

Without a doubt, the permanent members of the UN Security Council are not willing to give up their veto rights and permanent seats.

It is important to highlight the main positions of some countries. Without a doubt, the permanent members of the Security Council, the U.S., France, Russia, China and the United Kingdom, are not willing to give up their veto rights and permanent seats in the Security Council. A privilege they were given due to their victory over the Nazi Germany and Japan in the Second World War.

While countries such as France have been open to support the Germany’s call to expand the number of permanent seats, a position that Germany seeks for itself, it does not actually seem realistic to expect such a development. Furthermore, it is quite obvious that all of the permanent members act rather in terms of national interest instead prioritizing global security and peace.

If one looks at Germany’s position regarding Security Council reform, one notices an increasing insistence. As a country which was able to become a non-permanent Security Council member seven times—a huge success for a country considered a former “aggressor” prior to 1945— Germany is currently calling for a permanent seat, pointing to its global acceptance and successful economic performance. However, it is rather unlikely that an option for a  permanent seat will become true.

In comparison, Turkey calls for a comprehensive reform regarding the structure of the Security Council, stressing its fundamental statement that “the world is bigger than five”, as President Erdogan once again addressed during his speech at the 74th session of the UN General Assembly. As a member of the UfC movement, Turkey’s expectations of a new rotational format within the Security Council without increasing the numbers of permanent members, seems to be more realistic.

The current conditions within the UN demonstrate its gradual and unfortunate loss in its global significance, and it is seen instead as a dialog platform between world leaders. Countries seeking reform of the UN can use occasions such as the annual sessions of the UN General Assembly to make their call for a reform of the UN and specifically the Security Council. By this, closely allied countries such as Germany and Turkey should continue to stress their requests and perspectives on the UN reform, despite basic differences and expectations in how it should be done.