Can Manbij serve as a Model for US-Turkey Cooperation in Syria?

If the U.S. and Turkey can work together in northern Syria, they could broaden their regional strategic conversation that might also include Iran in the near future. A cooperation in Syria between two NATO allies is not a wishful thinking; it is a matter of will whether they will. 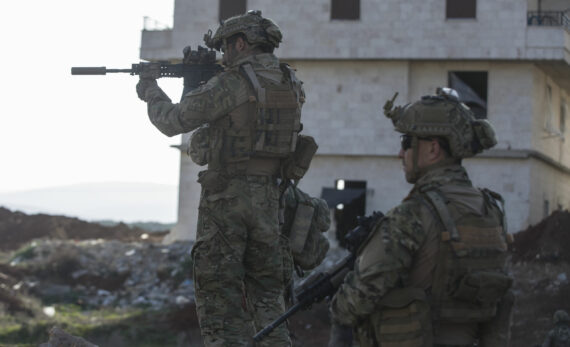 The U.S. and Turkey have been pursuing conflicting strategies in northern Syria for a while now. Turkey adamantly pursued to end the U.S. support for the YPG while the Trump administration has seen the group as its “local partner” in the coalition’s anti-Daesh efforts. Turkey’s Operation Olive Branch has recently ended the YPG’s control over Afrin, a city in which the U.S. has declared no interest but expressed “concern” about the Turkish operation. While Turkey is focused on clearing its borders from the YPG and Daesh, the U.S. is insisting that Turkish military operations distract from the fight against Daesh.

The strategies of the two countries diverge from one another so much that they carry the potential to come head to head in Manbij. However, negotiations in bilateral strategy talks, a mechanism established following the former National Security Advisor H.R. McMaster and Secretary of State Tillerson’s visits to Turkey, could yield a cooperation deal in Manbij, which could potentially be broadened. In such an optimistic scenario, the anti-Daesh fight would actually be strengthened while Turkey’s security concerns vis-à-vis the YPG could be met. A deal that pushes the YPG back east across the Euphrates and establishes a U.S.-Turkey coordinated patrol of Manbij can be the basis of broadened cooperation in northern Syria.

Today, Turkey is pushing the U.S. to end the YPG control in Manbij, a promise made by Vice President Joe Biden under the Obama administration. The capture of the town was so alarming that Turkey launched Operation Euphrates Shield in August 2016, only a month after the failed coup attempt of July 2016, in order to prevent further spread of the YPG control in the area. For Turkey, the PKK was trying to accomplish what it could not inside Turkey by creating an autonomous zone in northern Syria through the YPG. By intervening for the first time militarily in Syria, Turkey took the matter into its own hands as multiple U.S. reassurances about the short-term and tactical nature of its support for the YPG did not materialize.

Turkey has been able to change the strategic environment on the ground through its military operations at the expense of both the YPG and Daesh. Clearing its border from both terrorist organizations seems to be its current strategy. The U.S. strategy only partially overlaps with the Turkish strategy but that could be considered as a glass half full. Through an arrangement as described above, diversification of the governing structure of Manbij more representative of the ethnic makeup of the area could be accomplished. U.S.-Turkey military cooperation in patrolling the city can be a trust building measure. Such success in Manbij would not erase the overall strategic differences between the two allies but it would pave way for a broader and meaningful strategic conversation.

The U.S.-Turkey strategic realignment will be very difficult to achieve as the U.S. keeps its exclusive focus on Daesh while ignoring Turkey’s legitimate security concerns regarding the YPG. However, if Manbij can serve as a success story of military and political cooperation on the ground, both Ankara and Washington can build upon it. Regular strategic conversations to coordinate policy are a must between the American and Turkish governments and it can start with Manbij. This is true not only for their Syria policies but other regional issues as well.

As the Trump administration is gearing up to pull the U.S. out of the Iran nuclear deal, a new era of uncertainty and tensions will likely emerge. President Trump has championed “America first,” a slogan that at times manifested itself as unilateralism in foreign policy. The recent addition of the Pompeo-Bolton duo to the administration promises more unilateralism than multilateralism. The administration will likely find an unwilling Europe to corner Iran, and Turkey is not likely to take a confrontational stand against Iran. Yet, if the U.S. and Turkey can work together in northern Syria, they could broaden their regional strategic conversation that might also include Iran in the near future. A cooperation in Syria between two NATO allies is not a wishful thinking; it is a matter of whether they will.