Can Tense Relations between Turkey and the US be Improved?

Even if the two leaders are eager to solve the existing problems between two countries, there is the obstacle of a resistant Washington bureaucracy. 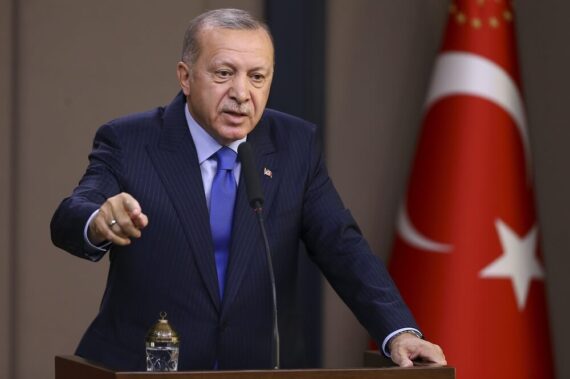 Turkish President Recep Tayyip Erdogan makes a speech during a press conference before his departure to Washington, November 12, 2019 (AA)

President Erdoğan will be paying a visit to President Trump in the U.S on November 13. After rising diplomatic tensions between two countries during Operation Peace Spring, this visit will be important in determining the future of Turkish-American relations. This face-to-face meeting will be a chance to solve problems that emerged between the two countries in recent years.

President Erdogan has stated that the top item on the agenda with President Trump will be the fight against the FETO terror group. The extradition of Fetullah Gulen, the FETO leader, to Turkey has been a long standing source of tension between Turkey and the US, and prioritizing this issue indicates a clear intention to make progress towards developing a more collaborative relationship to address security threats.

The Syrian crisis and Operation Peace Spring will also be at the top of the agenda. During Turkey’s military operation in Syria, Turkish-US relations deteriorated due to a conflict of interests and misunderstandings between the two countries on the Syrian issue. Obviously, the biggest issue of conflict is the YPG’s presence in Northern Syria. While Turkey sees it as a threat to its national security, the US sees them as useful to prevent the rise of Daesh in the region. Tensions between the two nations escalated and de-escalated several times during the operation and as a result, this visit will be important to repair relations between Turkey and the US.

When it comes to the American side, it appears that while President Trump sees the visit as a chance to discuss the Syrian border, terrorism and the YPG,  the American side is much more pessimistic about the visit, and it is likely that US officials will continue to take a firm stand on the YPG’s presence outside of the safe zone. It has also been said that while the two leaders may solve the existing problems, they also have to convince the Washington bureaucracy which is still angry about the agreement and Trump’s decision to withdraw from Syria.

Another prominent issue for the Erdoğan-Trump meeting will be the sanctions against Turkey and the resolution passed by the House of Representatives to commemorate “the Armenian Genocide”. It is a well-known fact that both decisions were taken by the US to force Turkey to halt Operation Peace Spring. President Erdoğan stated that he discussed the decision of the House of Representatives with President Trump on the phone and that Trump decided to examine this issue.

Other issues such as the Halkbank case, the future of the YPG in Syria will all be handled during the visit. Some of these issues have been in negotiation with the US for a long time and the outcome of this visit on these issues will be of interest.

It seems that even if the two leaders are eager to solve the existing problems between two countries, there is the obstacle of a resistant Washington bureaucracy. The ongoing impeachment investigation against Trump and the media’s aggressive stance against Turkey has forced him to take a confrontational stance against Turkey. Nevertheless, good relations between the two leaders helped in finding solutions for deep-rooted problems in the past, and ongoing intractable issues may be solved at the table once again.