If Trump decides to retreat MbS because of his brutality, which is unlikely to happen, it will not be a decision of American liberal principles, but a decision motivated by the increasing unpredictability of MbS's actions in the Middle East. 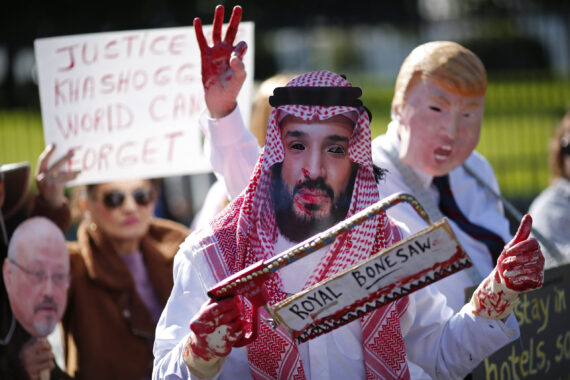 A protester dressed as Saudi Arabian crown prince Mohammad bin Salman and another dressed as U.S. President Donald Trump, demonstrate with members of the group Code Pink outside the White House in the wake of the disappearance of Saudi Arabian journalist Jamal Khashoggi October 19, 2018 in Washington, DC. Getty Images

World War I had begun following the assassination of Archduke Franz Ferdinand of Austria, but the geopolitical reason behind the war traces back to the power competition among the European states in the late 19th-century. Even though Ferdinand’s assassination was a crystallization of the already-broken strategic balance within European politics, it unearthed the influence of geopolitics on international politics: The intensified geopolitical antagonism in the Balkans that took place back in the day constitutes a great example in that regard.

One hundred years later, this time in the Middle East, another example reveals the mentality behind geopolitics. The disappearance of the journalist, Jamal Khashoggi, at the hands of Trump’s close ally, in the Saudi consulate general in Istanbul, displays the very nature of the violent geopolitics of the contemporary Middle East. The incident does not only expose the strategic rationality behind the brutal operation led by the MbS coalition but also underlines the competitive nature of regional geopolitics.

Competing narratives on the murder of Khashoggi

There have been two broad categories of competing narratives since Khashoggi’s first disappearance in the Saudi consulate. The first one revolves around the idea of fundamental human rights and freedom, for which killing a dissident journalist at the hand of a rogue apparatus of the Saudi regime constitutes the case. Contrary to the moral logic, the second narrative points out the reality of the geopolitics of the Middle East in general, and the geopolitics of Saudi Arabia in particular.

The latter is gradually becoming the main narrative and shaping our perception of the murder of Khashoggi. These two narratives enable us to understand the already-worsening political landscape in the Middle East. It is crucial to keep in mind that the region has a unique anarchical trajectory, and the ongoing legitimacy crisis of the existing international order shapes the very future of this region via geopolitics. Also, needless to say, the U.S. is an active influencer of the geopolitics in the Middle East.

The U.S. narrative regarding the disappearance of Khashoggi depicts the Trump administration’s complicated relationship with the Middle East. It is widely accepted that the U.S. is a liberal democracy, in which the rule of law, the freedom of speech and free market economy are at the center. This perception might be partly true within the borders of the U.S., but it does not play into reality abroad. The U.S. had never been a real proponent of ideal liberal democracy in shaping its foreign policy priorities abroad, especially in the Middle East. More importantly, the existing U.S. strategy in the Middle East constitutes the most troubling strategic obstacle preventing the achievement of a stable order in the region.

In other words, the U.S. itself is undermining the potential of establishing a stable region in the Middle East. The intention here is not to argue that without the U.S., the Middle East region would overcome its issues overnight. The U.S.’s Middle East grand strategy is only achievable through rogue actors that have no perception of universal values. From the PKK to Saudi Arabia and from Israel to the UAE and Egypt, the U.S. can only deliver its strategic objectives through rouge entities or regimes, who are also incapable of delivering their own grand strategies without the support of the U.S. in the region. It is no secret that, in every single incident, the Trump administration stands by the rogue regime or entity at stake.

The Khashoggi murder is no exception for the U.S.

Regarding the disappearance of Jamal Khashoggi, however, the U.S. embraced two different narratives simultaneously. The mainstream media, particularly the Washington Post, where Jamal Khashoggi contributed as a columnist, disseminated the intelligence information shared by anonymous Turkish intelligence sources and pushed the Trump administration to take some responsibility to clarify whether his most popular ally, the Crown Prince of Saudi Arabia, also known as MbS, has any responsibility behind the disappearance of Khashoggi.

While the media and some of high profile Republicans and Democrats frame the Khashoggi case within the context of American universal values, the Trump administration determined its strategy in line with its arms deal with Saudi Arabia, the containment strategy of Iran, the fragile balance of power in the Gulf region, and the U.S.-Israel master plan on Palestine. However, Turkey’s cautious approach gradually pushed Saudi Arabia to accept its responsibility, and the Trump administration had to change its ways of framing the issue.

Here, the problem for the Trump administration is not the action of the Crown Prince against a dissident journalist, but it is the intelligence information shared by Turkey.

At this stage, if Trump decides to retreat MbS because of his brutality, which is unlikely to happen, it will not be a decision of American liberal principles, but a decision motivated by the increasing unpredictability of MbS’s actions in the Middle East.

Turkey and the Khashoggi murder

When it comes to Turkey, besides the moral aspect of the Khashoggi murder, the mentality of geopolitics is also a determining factor not only in understanding the nature of Khashoggi’s death but also in determining Ankara’s foreign policy agenda. From the geopolitical angle, Turkey did not initially want to disrupt its relationship with the Saudi state but desired to influence Saudi’s anti-Turkey position in the region. During the first stage of the disappearance of Khashoggi, Ankara decided to provide details about Khashoggi’s killing at the Saudi consulate to shape the perception of international media to test the waters. This stage was crucial for Ankara to locate the Khashoggi murder as an international issue rather than formulating it as a Turkish-Saudi problem.

More importantly, Ankara pushed the Trump administration to take a leading role in addressing the issue to confront Saudi Arabia. The central rationality behind Ankara’s behavior was to create an international moral awareness to put pressure on Saudi Arabia and push the Saudi authorities to accept the crime that they committed. It was clear for Turkey that Saudi Arabia would not accept its responsibility if Turkey had not gradually shared the intelligence information with the international media.

In the second stage, Ankara started to intensify its intelligence sharing to ultimately show that Saudi Arabia had the responsibility in organizing every single stage of the Khashoggi operation. Following the 17 days of intelligence sharing by Turkey, Saudi Arabia had to confirm that something went wrong during the interrogation of Khashoggi in the consulate. During this stage, Saudi Arabia quickly became an international flashlight as international actors began to change their attitudes against MbS.

In the third stage, President Erdogan himself began to lead the process by sharing his perception with the international audience. On Tuesday, President Erdogan gave a very detailed timeline explaining that the Saudi team planned the brutal killing of Khashoggi. In his speech, Erdogan did not directly accuse the Saudi leadership but highlighted that a Saudi probe, which has resulted in the arrest of 18 people so far, has not yet reached the high-level representatives in the Kingdom’s inner circle.

It is clear that Ankara has a moral duty to clarify what happened in the consulate as well as various geopolitical concerns. Within this context, underlying the role of MbS in Saudi politics carries a critical role in explaining the geopolitical dimension of Khashoggi’s murder. For Turkey, there is profound geopolitical disagreement between Ankara and Riyadh regarding regional affairs.

While Saudi Arabia’s support of the U.S. strategy towards the PYD/YPG in Syria is an essential one for Turkey, MbS’s role in the Palestinian case demonstrates another issue, in which Saudis seem to be an integral part of a long-term U.S.-Israel strategy to redesign the region. Qatar is also a critical disagreement point in Turkish-Saudi relations. From Libya to Yemen, Turkey and Saudi Arabia compete with each other.

President Erdogan intentionally highlighted in his speech the difference between the King of Saudi, Selman and politically responsible name behind the murder by saying that the killing was premeditated. At this stage, Turkey is trying to carry out its position one step forward to weaken the legitimacy of MbS internationally and to deter Saudi Arabia’s anti-Turkish geopolitical ambitions in the Middle East. The intelligence knowledge that Turkey has can also shift the U.S. position against MbS.

Khashoggi’s murder revealed the complex nature of geopolitics in the region, but how it is going to influence the future of the region remains a big question mark.