Seculars and conservatives experience and discover one another. Both are being diversified, intertwined and transformed. This unique relationship of secularism and religiosity/conservatism in Turkey becomes even more critical in a period when terror is rising in the name of Islam around the world. 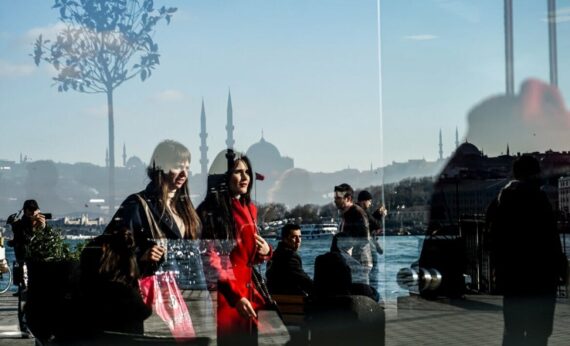 Following the terrorist attack on the Reina nightclub during the New Year celebrations, a number of messages appeared in social media that praised the callous attack. These messages not only praised the attack but also openly targeted the secular lifestyle. Columnists who are critics of current government policies lost no time in using these messages twisting it to their own agenda, and the lifestyle debate, which had already begun before the New Year, was revived with even more fervor.

The President of Turkey’s Directorate of Religious Affairs (Diyanet) issued a statement regarding the dispute and reaffirmed the public, saying that lifestyles in Turkey were under no threat and protected by the state. Turkish President Recep Tayyip Erdoğan also made a number of statements to dispel any question of a danger to normal everyday life and that it had not been for the past 14 years. Fortunately, many people in the public arena also protested the numerous attempts to link terrorism with the current lifestyle debates – an effort that was seen by many to mask the true face of terrorism – and to prevent the rise of social tensions exploiting a dominant social pattern in Turkish society.

Terror attacks allegedly made in the name of Islam in Turkey are not dissimilar to those that have taken place in Europe. No doubt that these attacks are intended to convey messages to both the targeted country and the world. Many terror experts agree that terror attacks often have many other goals than the incident itself. It was evident that the rampage at Reina was intended to disrupt and create a tension on the secularist-conservative duality balance in Turkish society. However, there are structural obstacles to activate this line of tension.

Firstly, the relationship between state and religion in Turkey is unique to the country and it has capacity to cope with this tension. Moreover, the tension has long become a central dynamic for Turkish society, in which both conservative and secular segments transform one another. The Diyanet, the view of leading political parties, and also the tendencies of these two groups themselves guarantee the presence and futures of secularists and conservatives in Turkey. Occasional conflicts and tensions between secularists and conservatives, though sometimes disturbing, should be seen as natural in this way.

In fact, Turkey’s modern political history is almost based on this disturbing tension. For example, the February 28, 1997 coup was a severe blow to the large number of conservatives and to their upward mobility. But, by the end of the process, the conservative block achieved in winning the political power that opened new spaces for secularists and conservatives to engage one another and even to establish new alliances. Since then, there is no doubt the lifestyle debate in Turkey has become less intense under the Justice and Development Party (AK Party). The official Islam portrayed by the Diyanet does not posit it as a religion against or in relation to secularism. Turkish Islam marries both traditional Islamic and traditional secular practices shaped within the same tradition. In Turkey, neither Islamic nor secular practices resemble those in Europe, especially when one considers the transformative power that each group is able to exercise over one another. On the other hand, religious communities in Turkey, nourished by various Islamic sources, draw their justifiability by the very presence of the Diyanet, with the institution owing this to the high level of its social acceptance.

Nevertheless, the controversial field has occasionally been exploited by other groups, and the Fetullah Gülen Terror Organization (FETO) has been a bitter example of this. The group turned into a terror organization gradually in the last three years. But it should be remembered that the group owed its success largely to infiltrating state institutions by disguising themselves as secularists. The group, which principally promised upward social mobility to middle classes conservative Muslims by offering them a quality education, exploited the secular-conservative tension and found room for hiding its various illegal and unlawful acts. The official Islam in Turkey represented by the Diyanet acts as a guarantor, which can call various religious sects (cemaats) in the country to account. The presence of the Diyanet is also a guarantee for secularists. Although some statements of certain Muslim clerics caused contention, especially among conservative people themselves, outlandish statements are generally viewed with a veiled sarcasm. What is important to remember is that the secularists in Turkey generally do not give credit to radical interpretations of the religion they believe in.

The debate on lifestyles between secularists and conservatives and its association with increasing social tension is actually related to the nation’s past experiences. Secularists are afraid that conservatives are eager to take revenge for the February 28th coup, which caused much suffering and traumatized many of them. Indeed, the secularists see it a zero-sum-game: if religious life is not constrained, their own lifestyle would then be under threat. They are disturbed by official praise for religious life and believe that this praise poses a threat and jeopardizes their own lifestyle. However, the struggles in the political sphere should not lead us to overlook the class features of secularist and conservative circles that have been intertwined in the last twenty-thirty years.

There are two major political parties in Turkey that represent both lifestyles: the AK Party and the CHP. Despite this, boundaries of secularism and religiosity are neither solid nor static. With the AK Party government, the conservatives found opportunity to express themselves, while this led the secular circles to have concerns about their future. This anxiety was expressed during the 2013 Gezi Park protests, in which the secular wave created almost a kind of terror in the country. Yet a critical view on the Gezi protests enables us to see that it was not actually secularism, producing terror but the involvement of certain ideological groups, mainly radical leftist groups, which terrorized the protests.

Additionally, some ethnic groups in Turkey could negatively contribute to the secularist-conservative tension. For example, when the HDP, a Kurdish nationalist political party with separatist tendencies, realized that it cannot merely survive with the votes of Kurds, it aspired to gain secular Alevi votes and prepared an Alevi “package” claiming to meet their identity demands. Indeed, the overlapping of secularist-conservative tension with ethnic separatism is a worst case scenario for Turkey, and has the real potential to give birth to brutal conflict. On the other hand, ethnicity-based ideological tensions regard the division between the secularist-conservative lifestyles a favorable ground to exploit. But the peculiarity of state-religion relations in Turkey structurally prevents manipulations in this field.

The strength of the secularists-conservatives duality, which Turkish society was built upon, finds the beginning in the birth of the Republican Era. Today, political parties still pay attention to this tension and win votes through it. However, secularism and religiosity/conservatism, though in a conflict, have created their own idiosyncrasy in Turkish society. Seculars and conservatives experience and discover one another in this process. Both are being diversified, intertwined and transformed. The transformation of this into terror is possible only through an intervention or by way of a non-local force from outside of the social formation. This unique relationship of secularism and religiosity/conservatism in Turkey becomes even more critical in a period when terror is rising in the name of Islam around the world.