If the grand coalition is established and if it takes into consideration Ankara’s on-going willingness to cooperate more closely with Berlin, and thus materializes this opportunity, the German business community as well as her citizens will benefit from this to a great deal. As for Germany herself, it seems that any alternative scenario other than such a grand coalition would apparently force the country into a prolonged state of political crisis. 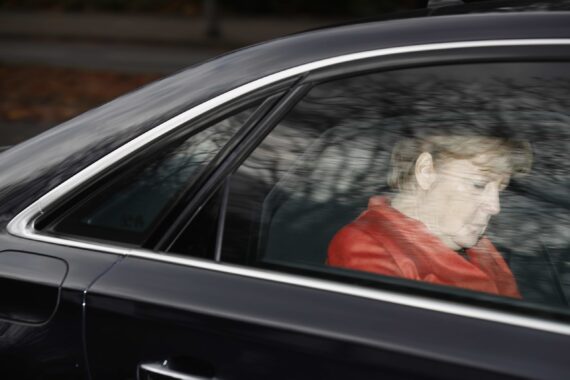 German Chancellor Angela Merkel leaves in her car the presidential residence Bellevue Castle in Berlin where she met the German President on November 20, 2017 after coalition talks failed overnight. Chancellor Angela Merkel was left battling for political survival on November 20 after high-stakes talks to form a new government collapsed, plunging Germany into a crisis that could trigger fresh elections. AFP

The German political party landscape may for sure be undergoing seismic changes but it seems fair to ascertain that they are far from any shift of a tectonic nature at least as of yet. Granted, some additional post-election fault lines are clearly visible and in particular so as a far-right movement – Alternative für Deutschland, (AfD) – entered the Bundestag for the first time. There are others, for instance, it is very untypical for Germans to spend eight weeks trying to form a coalition government without anything coming out of it.

SPD U-turn would be logical, but will it happen?

When Martin Schulz, in his capacity as a leading candidate and party chairman of the Social Democrat Party (SPD), declared on September 24, 2017 that the SPD would not be willing to continue the grand coalition with the Christian Democrat Union/Christian Social Union (CDU/CSU) many observers were surprised. Seldom do party leaders refuse to join a potential coalition or government before they were even asked. His argument and justification for his refusal on pursuing a coalition was that the grand coalition was voted out by the public. Yet mathematically it had a majority. It was only a matter of time until the party’s influential center-right Seeheim Circle would knock on Schulz’s door to ask for a reconsideration of his decision.

Then the ‘Jamaica’ talks began, which aimed at forming a coalition out of the CDU/CSU, the Green Party and the Free Democrat Party (FDP). Now this option was shelved for good by the FDP just over a week ago – although I dare say other parties could have pulled the negotiating chair away from the table at a later stage, too.

Originally after the election, only three subsequent scenarios were legally possible: Chancellor Merkel who, albeit in an acting role only still the chancellor, could ask the Bundestag to be elected with a simple majority in a third round of voting and as long as President Frank-Walter Steinmeier would approve she could form a minority government. Alternatively, after a similar parliamentary voting protocol and in the case of no government being ready to take control, the president would dissolve parliament and snap elections would be called upon within a maximum time-frame of 60 days. Finally, a remake of the current grand coalition could be agreed upon leading to an absolute majority of whoever is presented as chancellor and thus automatically being approved by the president.

At first the SPD once more categorically ruled out the latter option. Actually, so did Mrs. Merkel, who said that after all she heard from the SPD, snap elections would be her favorite solution. After the president spoke with party leaders and following Thursday’s meeting with Mr. Schulz and a night marathon at SPD headquarters, it became obvious that at least the above mentioned Seeheim Circle of the SPD is up for a U-turn. Only late night Sunday 26 November, 2017 did the CDU/CSU do the same, rejecting snap elections and asking the SPD to consider coalition talks. Thus as it stands, whilst penning this article, a continuation of the grand coalition has at least become a viable solution once more.

But some SPD members are now hinting at the possibility of a fourth option, untried, but technically speaking, legally possible: forming a type of cooperative government short of a formal coalition agreement, where two or more parties agree on an issue-by-issue basis about policy.

Yet knowing German politics for a fair number of years if there is one thing most voters and politicians dislike, it is instability. Both a minority government, as well as the SPD’s fourth way would promise exactly that.

Is anything going to change for the three million + citizens of Turkish background?

Let us assume for the purpose of this short analysis that Germany opts for what is assumed to be a stable government. The good news is that as status quo oriented by nature any grand coalition would be, it does not seem unlikely that such a CDU/CSU-SPD re-run would become a policy initiator instead of merely a policy administrator, as there are many hot issues that need urgent attention: Europe, energy, education and immigration to only name a few. As the AfD is poised to continue to play the anti-immigrant card and as imitating right-wing rhetoric did not lead to a huge bonus at the ballot box for more center based parties, this time round one should expect a more welcoming set of policies towards, in particular, the just over three million citizens of Turkish background living in Germany.

Adopting anti-multicultural and anti-integration rhetoric will only make extreme movements even stronger in the long run, as ultimately voters tend to prefer ‘the real thing.’

Deep down both the CDU/CSU and SPD will have realized that misusing an entire nation as focus of unfair negativity – which is what had happened with Turkey during the run-up to the 24 September vote – was completely wrong and put citizens of Turkish origin into a very difficult, if not outright dangerous, situation. After all, if a government declares a country no longer welcome, how would you feel living in that same country being of that very nation’s origin?

A modest suggestion would be catching votes by employing negative rhetoric vis-à-vis Turkey out, winning votes by sidelining extremists in – that could be a logical way forward.

Grand coalition – only route to stability

Good bi-lateral contacts rely on sound policies between two nations’ leaders, mutual trust between their business communities and of course amicable relations between both populations. The Turkish government, her businessmen, businesswomen and her citizens were and are ready. Ever since early, Turkey has become an outward looking, enterprising, and a successful nation in the last one and a half decades. Ankara rightly complained when the German response to this outreach was to put it mildly, not always visible.

Not fully grasping the struggle against heinous criminals who aimed at destroying Turkish democracy by means of a military coup attempt on July 15, 2016 is one point. Turning the back on Turkish leaders who wish to meet their fellow citizens on German soil, another. Moreover, it is disappointing to watch such a model democratic nation as Germany – and in particular so having learned from history, for example the threats domestic anti-democratic movements and individuals can pose to herself before and during World War II, as well as during the later Red Army Faction terror campaign – that right after the July 15 coup attempt until this very day members of the Fetullah Gulen inspired criminal cult have found refuge in Germany. It would be a timely gesture for Berlin to reconsider Ankara’s very real concerns.

If we then pair this with what I label a totally non-logic, and non-understandable personal expression of hate against the Turkish president, which in some instances, for example the Green Party under Mr. Özdemir, went so far as to say no EU membership talks as long as President Recep Tayyip Erdoğan is in power, which is a direct interference in Turkey’s domestic politics by inciting hatred in society, the picture looked not promising at all.

However, every winter is followed by a new spring and summer. A grand coalition composed of seasoned politicians from both German mainstream political movements is the best bet to achieve exactly that. High-level political dialogue meetings should precede more direct investments by German companies. Turkish exports into Germany could then rise further, which would lead to an increase in two-way tourism levels.

If the grand coalition is established and if it takes into consideration Ankara’s on-going willingness to cooperate more closely with Berlin, and thus materializes this opportunity, the German business community as well as her citizens will benefit from this to a great deal. As for Germany herself, it seems that any alternative scenario other than such a grand coalition would apparently force the country into a prolonged state of political crisis.