Europe Is Not United in Its Motivation to Sanction Turkey

The EU is divided over sanctioning Turkey, with countries such as Italy, Germany, Poland, Spain, Portugal, and Malta standing against severe sanctions proposed by Greece and France. 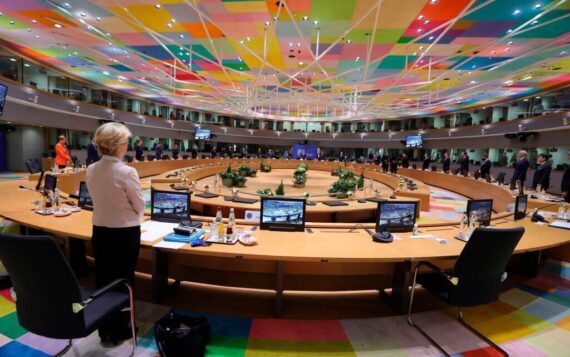 EU leaders meet for a year-end summit that addresses issues of climate, budget, virus recovery plans, Brexit, and sanctions against Turkey at the European Council building in Brussels, on December 10, 2020. Photo by Olivier Matthys, AFP via Getty Images.

No doubt, Turkey’s relationship with the European Union has not been a rose garden. The first contact dates back to the 1960s and the Ankara Agreement, and over time led to the establishment of a customs union. The gradual institutional rapprochement culminated in 2005, when the negotiations for full Turkish membership began.

The process immediately exposed fractures within the European block, attributable for the most part to the existence of a certain criticism towards Ankara. The admission process introduced significant issues to the political debate in Turkey, aiming primarily at a more democratic governance.

However, from the very beginning, the accession path has been affected by a lack of cohesion and a lack of a joint perspective from the European side, mainly due to the divergent stances of some member states.

Hence, the negotiations progressed only slowly, and the unresolved Cyprus issue in conjunction with the double standards by member states led by Germany and France contributed to undermining the principle of pacta sunt servanda.

Though since 2004 Ankara has continued to support the solution offered by the Annan Plan, it has faced not only the intransigence of the Greek administration, but also the full annexation of Cyprus as a member state of the European Union, which, in turn, has vetoed most of the significant chapters by causing to halting the negotiation process.

If those were the assumptions, nowadays the relations with the European Union experience growing tensions leading to a mutual crisis of confidence. What we have witnessed in the recent months in the Eastern Mediterranean and over the main European negotiation tables are nothing more than the products of those unresolved issues and stances that have little to do with realpolitik.

Although the European Union acts and operates according to the principle of unity and solidarity in itself, a careful analysis reveals that the treatment of Turkey has been different.

On the one hand, there is a tendency by a block in the EU to dominate the European debate and its key issues with reference to a self-assumed political and moral superiority expressed chiefly by Emmanuel Macron who tries to monopolize the European rhetoric and represent France as the leader of the liberal world.

On the other hand, there are mediating attempts based mainly on strategic and consistent considerations. French President Macron, along the lines of the traditional anti-Turkish sentiment, has not skimped on granting support to Greece and Cyprus over the critical issue related to the delimitation of territorial waters, which recently has seen an escalation of tones and maneuvers in the Mediterranean.

Last summer, after Turkey carried out hydrocarbon exploration activity in the waters around Cyprus, the tensions increased. Greece responded with naval exercises in the same maritime corridor, which were then reinforced by the deployment of French frigates and fighter jets.

The dispute was perceived by the European Union as a growing geopolitical risk in the area, to the extent that top EU diplomat Josep Borrell raised the possibility of sanctions against Ankara. Paris, however, did not succeed in persuading other EU members to join this hard line. At the Ajaccio Conference in September 2020, Macron explicitly stated that “Ankara is not a reliable partner in the Mediterranean,” further exacerbating the climate.

Among the representatives at the table only Greece accepted the proposal to punish Turkey, while Italy, Portugal, Spain, and Malta opposed more severe sanctions against Ankara. Therefore, in preparation for the Special European Council on October 1-2, which convened specifically to assess the situation in the Aegean Sea, a more intense collaboration has emerged between Paris, Athens, and Nicosia, while the other coastal states opted for a constructive approach based on dialogue.

In this frame, Rome plays a key role by proposing a positive agenda towards Turkey. Since the very beginning, Italy has supported Ankara’s EU accession, which is considered of great importance from both a strategic and a political point of view. At that time, the so-called Friends of Turkey, including Italy, Spain, the UK, and Sweden, was established with the explicit aim of balancing the existing negative approaches.

However, more recently, in the resolution following the meeting of the Council of Europe on December 10-11, EU leaders reaffirmed the EU’s strategic interest in the development of a cooperative and mutually beneficial relationship with Turkey and stressed the importance of keeping channels of communication between the EU and Turkey open.

A positive EU-Turkey agenda is on the table, provided by Turkey’s readiness to resolve differences through dialogue and to act in accordance with international law.

The offer of a positive EU-Turkey agenda remains on the table, provided Turkey shows readiness to promote a genuine partnership with the union and its member states, and to resolve differences through dialogue and in accordance with international law. This approach confirms that Italy, Spain, and Malta – supported as well by Chancellor Angela Merkel’s Germany – have succeeded in prevailing a softer line towards Ankara.

The reasons behind this dialogue-based orientation are manifold. First, there is a subtle acknowledgement of the legitimacy of certain Turkish requests and of the importance of Turkey as a valuable partner, proving how much Europe and Turkey need each other. In a time of uncertainty and several crises, Turkey stands as a crucial gateway in the containment of threats and risks for Europe.

The fight against terrorism, arms trafficking, and human trafficking are some factors underlying the existence of a strong complementarity. Moreover, Angela Merkel on behalf of the whole EU, was one of the main architects of the Refugees Deal signed with Turkey in 2016, whose aim was to stem the irregular migratory flow across the Mediterranean and the Balkans. Despite the numerous vicissitudes and certain non-compliances on the European side, the agreement has been effective in containing irregular immigration, demonstrating once again that Turkey is a partner Europe can count on.

For the same reasons, a certain degree of support and sympathy are expressed by Hungary and Poland, whose relations with Turkey are very positive. In other words, a further deterioration in the relations and in the mutual trust could generate a snowball effect that the whole EU, considering the fragility of some internal mechanisms of control and on the migrants’ reception policies, would not be able to cope with.

As a matter of fact, the Mediterranean is an area of shared historical and strategic interest where Ankara as a smart power is acting in an increasingly assertive way. After all, the Turkish presence in scenarios that suffer from the decision-making vacuum left by the European powers, has led to a certain level of stabilization.

In Libya, alongside Fayez al-Sarraj and the government legitimately recognized by the UN, Ankara has effectively established itself as a peacekeeping force, protecting the interests of European countries as well. All EU states support the UN-recognized government of al-Sarraj with the exception of France which stands close to the warlord Haftar and therefore had to complain about the presence of Turkish soldiers in Tripoli.

In the frame of the Berlin Conference of January 29, 2020, Italy and Germany contributed toward mediating and channeling Turkish expectations to the European tables. Speaking of the alignments and divisions on the fields, Italian Foreign Minister Luigi Di Maio reiterated, “We must accept the Turkish presence in Libya.”

Furthermore, from an economic perspective, the fact that the European Union is Turkey’s number one trading partner with an overall trade in goods estimated at $138 billion should not be underestimated.

Among the European countries, Germany stands in first place ($35.9 billion) and Italy in second ($20 billion). Therefore, the protection of national interests also play into a positive agenda towards Turkey and further strengthen the “against sanctions” attitude.

The likelihood of maintaining good relations with Ankara will continue alongside the willingness of France, which is increasingly isolated within the union, to monopolize the political discourse, with the strong support of Greece, Cyprus, and Austria.

Despite the fact that the negotiation process is nowadays at a standstill, the contacts between Turkey and the European Union will continue given the emergency of new challenges posed by global developments and the fact that proper responses will require and inevitably involve a greater cooperation.