Centralizing and de-centralizing dynamics existing side-by-side create a complex situation for the present and future of Turkish politics. 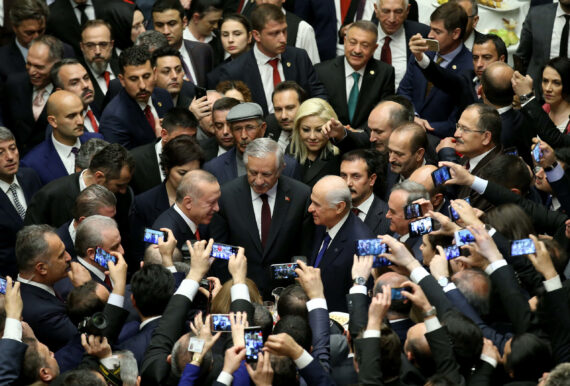 President of Turkey, Recep Tayyip Erdogan chats with Chairman of the Nationalist Movement Party (MHP), Devlet Bahceli at the reception held by Speaker of the Turkish Grand National Assembly Mustafa Sentop marking the 99th anniversary of foundation of Grand National Assembly of Turkey (GNAT) with National Sovereignty and Children’s Day at GNAT in Ankara, Turkey on April 23, 2019. Anadolu Agency

Turkey has recently gone through a highly competitive local election process and the campaigns, alliances and results tell us many things about the newly established presidential system and new electoral behaviors and political culture in the country. The Turkish governmental system shifted to a presidential system from a parliamentary system with the 2017 referendum and two elections after this shift – the 2018 presidential and parliamentary elections and the 2019 local elections – mark significant shifts in political competition and the nature of Turkish politics.

Turkey’s political culture and competition emerged within the era of the parliamentary system. During this system, besides long eras of coalition governments, the country witnessed single-party governments of the leading parties that received very low rates – such as when the AK Party obtained 33% of the general vote in 2002 and formed government. However, the presidential system changed the system radically and the threshold to winning an election has become at least 50% of the votes. With this shift to a presidential system, it means a harder target to reach and thus encourages and even forces political parties to form alliances with each other in order to pass the threshold.

The presidential system in Turkey has changed the game of politics radically and the threshold to winning an election has become at least 50% of the votes.

CHP, a leftist and Kemalist party came together with SP, an Islamist party. Moreover, the Iyi Party, which claims to be a Turkish nationalist party, did not reject support from the HDP, which is a separatist and pro-PKK political party. Although vast inner contradictions among the parties of the Nation’s Alliance, these parties met in the same electoral alliance. These need to be analyzed in the context of the political blocs that emerged after the new presidential system.

The right and left-wing electoral balance among Turkish voters has been around 65% to 35%. But the politics of alliance blocs has changed this.

The common assumption about the right and left-wing electoral balance among Turkish voters has been around 65% to 35%. This balance seems to transform into a new form within this new politics of alliance blocs. Although the Iyi Party and SP are relatively small right-wing parties, considering their total votes in the last general election, they achieved in motivating their voters to vote for the CHP candidates, which, it is fair to state, is a hard job. Considering its highest rate of votes in the last 30 years was 25%, the electoral bloc pioneered by the CHP managed to reach the rates of 47% with the external support of the HDP.

This new wave of electoral alliances is an important dynamic to change the traditional balance of right and left among Turkish voters. This alliance might increase the chance of the CHP for winning the government, while there was a much lower chance. However, this also enforces the CHP to meet the demands of other parties for determining a more right-wing candidate to convince non-left opposition voters. For instance, in two metropolitan cities, Ankara and Antalya, which the CHP won from the AK Party, CHP candidates were politicians that came from a different political tradition. Mansur Yavas had been the MHP mayor of Beypazari and Muhittin Bocek started his political career after being elected as the mayor of Konyaalti, from the Homeland Party (ANAP) – a former center-right political party.

Moreover, Ekrem Imamoglu, CHP’s Istanbul candidate, was also a previous member of ANAP and coming from a conservative, non-leftist background helped him to obtain the support of conservative, right-wing voters in Istanbul. The CHP administration even tried to pursue former AK Party member and former President Abdullah Gul as their presidential candidate. However, Iyi Party opposed this idea since its leader did not accept withdrawing from candidacy.

Considering its highest rate of votes in the last 30 years was 25%, the electoral bloc pioneered by the CHP managed to reach the rates of 47% with the external support of the HDP.

The fact that the necessity for winning an election is gaining at least 50% of the votes enforces political parties to compromise and reach common candidates with other parties and receive their support. This triggers a new dynamic in Turkish politics: centralization. The candidates, their discourse, campaigns and teams, regardless of political membership, are selected among moderate and central figures. The co-existence of different ideological and political movements in the same alliances also causes the decrease in ideological identities and the replacement of ideologies that were constructed in the Cold war era with non-ideological figures. This trend is also a case in some European countries, such as France, where Emmanuel Macron became a common political figure to counter the “threat” of far-right governance as a non-ideological figure. This centralizing dynamic of electoral politics is the first important dynamic in the context of bloc politics.

Second, because of the 10% threshold to gain seats in the parliament in the old parliamentary system, smaller parties were not counted as significant and tended to be ignored. However, as we can see in the examples of SP and BBP, even if their votes remain at around 1%, they have become key figures in Turkish political life. These parties emerge as “negotiator parties” in order to change the game where the voters of two blocs are close and electoral volatility among alliances is very low. We can also consider the HDP in this context. Even if its support to the Nation’s Alliance is considered as external support, receiving the HDP’s support was of crucial importance for the CHP and allowed it to gain major votes in big cities. This second dynamic rises as the ‘de-centralizing dynamic,’ which can open the gates for acceptance of relatively small, marginal groups that used to remain outside the political periphery in Turkey.

These both centralizing and de-centralizing dynamics existing side-by-side create a complex situation for the present and future of Turkish politics. This complex situation is also valid for Turkish voters. As we witness among the strategy of formation of alliances and their tactics of selecting candidates, the Turkish electorate have also pursued tactical voting. The behavior of the Turkish voters has become to oppose something rather than to support it. It can be argued that the majority of voters within the Nation’s Alliance display attitudes of anti-Erdoganism, rather than supporting a CHP government and vice-versa for the People’s Alliance. This arises from the political polarization of the country.

The centralizing figures that lead the candidacy of right-wing figures from the CHP aims to break the opposing pole and gain votes from the conservative-nationalist bloc. This strategy could be regarded as successful in the cases of Ankara and Antalya. Moreover, in the future, we might see both the AK Party and MHP attempting to change their discourse in order to break the other bloc and to gain votes from it. The recent ‘Turkey’s Alliance’ discourse displayed by President Erdogan could be considered in this context. President Erdogan expressed his new concept of ‘Turkey’s Alliance’ after the recent local elections as an umbrella for all different political groups to unite the nation against the threat to Turkey’s security and independence. This could be an example of the centralizing dynamic that leads political leaders, from both sides, to influence and attract the public in the political center.

The presidential system has led to a de-centralizing dynamic, which can open the gates for acceptance of relatively small, marginal groups that used to remain outside the political periphery in Turkey.

The emergence of new blocs also pushes both sides to position in the political center and gain small political figures at the same time. Positioning in the political center is also about satisfying the demands of the social center. For instance, the necessity of gaining votes from the conservative majority of society enforces the CHP to sway away from its orthodox Kemalist discourses and practices, which could be perceived as anti-religious. Similarly, this new bloc politics pushes the AK Party and MHP to persuade young voters, who are mostly middle-class, educated and live in major cities. This is the demographic in which the People’s Alliance gains the least votes. These dynamics mean point to a change in political figures, discourses and campaigns. Since the political atmosphere and criteria of winning has totally changed in this new bloc politics after the establishment of the presidential system in Turkey, the rules and tactics of the game have also changed.